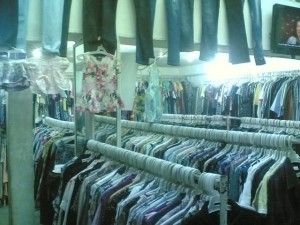 The outrageous inflation of prices in Syria has driven the poorest and richest members of Syrian society to shop at second-hand stores. Each has their own reasons for resorting to used clothes: the poor are searching for affordable prices while the rich are on the lookout for brand names.

“The crazy inflation is burning a hole in all our pockets, especially we poor,” said 63-year-old Abu Iyad as he visited a second-hand clothing shop in Damascus’ Al-Qassaa neighbourhood. “My pension is 13,000 Syrian liras (around 88 dollars), which is barely enough to feed my family, so how am I supposed to buy them clothes from regular stores; used clothing stores are the only outlets for poor people like us.”

The second-hand stores have come to resemble popular, open-air markets, bringing together a variety of foreign and imported brands as well as local brands and materials. There is also competition between different second-hand merchants, given the recent resurgence of the trade and its spread to various new areas for the first time, such as Al-Qassaa, Al-Hamra and Al-Salihiya, and the high demand for goods in areas that have absorbed many of the displaced, such as Jaramana and Al-Mazzeh.

“The head of the family can find everything his family needs in used clothing stores, from shoes to jeans and clothes of all different sizes for all ages, for women, men and children, all of which can be had at prices that accommodate limited incomes, in varieties, qualities and brands comparable to the inventories of the fanciest stores,” said one of the used clothing traders in Al-Qanout.

The seller indicated that there are shops specialized only in shoes, mostly carrying internationally-known brands, just as there are used clothing stores that offer new, unused clothing, items of which are distinguishable by higher prices.

Um Wisam, 38, cannot hide her happiness as she talks about the shoes she bought for her son from the second-hand store last year.

“The shoes are still new, almost like they were never worn,” she says, as she rifles through the racks at the store in search of a pair of jeans for her son. “The second-hand store is a blessing in these hard times that have fallen on us and all Syrian families.”

A trader in Jaramana says Syrians are flocking to second hand stores because of the cheap prices.

To further highlight the comparison, sellers say that a family of four, for example, will immediately go to the second-hand store, where the whole family can be clothed for only 15,000 Syrian liras, whereas 50,000 Syrian liras wouldn’t be enough for the same family if they went to a regular store.

“Even the prices of used clothes are elevated, and aren’t as cheap as most might think,” says Salwa, 28, as she bargained with a second-hand clothing merchant over the price of a woman’s overcoat, known as a “manteau.”

Salwa is a new customer, whose only began frequenting the second-hand stores four months ago.

“I used to look down on used clothing stores,” she says, “but then I discovered all their advantages, like the quality, variety and international brand names of the items here, that you can’t find even in the best of places, as well as the prices that suit my modest income.”

Small dealers buy their goods from the central second-hand store in the fire department and television district. The stores are ranked on a scale, which includes first, second and third rate stores, as well as a category called “super cream,” which, in second-hand parlance refers to a shipment of unused clothes from a regular store. These latter items are sold as new in second-hand places, and each of these grades and categories have their own customers, who find in them what suits both their desires and purchasing power.

However, in contrast to the popular support for second-hand stores, the government sees this trade as something that hurts Syria’s reputation, and continues to forbid the import of second-hand goods from abroad.

The Syrian Deputy Minster of Economy Abdel Salam Ali told the Al-Iqtisadi website in December that the main reason for banning the import of used goods is that “no matter how difficult things might get, we don’t want for Syria to become the world’s garbage disposal, in addition to the fact that the federation of the Chambers of Industry and Commerce have special ties to the manufacture of cotton clothing and the garment industry, and the second-hand trade creates a huge competition for local production.”

Despite the fact that store owners and merchants pay the taxes imposed on them, a large part of their goods are smuggled and subject to seizure every now and then.

“Most of our goods come from the markets in Lebanon and Jordan,” says one merchant. “We’re forced to resort to smuggling in the face of the Ministry of Supply and Internal Trade’s refusal to allow legal import, despite our continuous demands for such.”

The Ministry of Supply and Internal Trade earlier proposed to approve the legal import of used goods on the condition that they be accompanied by a health certificate attesting to the fact that the goods have been sterilized and are germ-free, and that the goods be audited with the office of the boycott of Israel to ensure that all goods comply with the boycott, and that there be tight control at all levels of import, from customs, to health and boycott, but the government still has not  admitted the goods.

A government financial source told Damascus Bureau that the decision to ban the import of used goods is “a very old one, over 15 years old, reissued in order to ensure the protection of national production.”

The source, who wished to remain anonymous, explained that many garment factories have stopped production.

“The Zablatani garment factories, that used to make knitwear and ready-to-wear clothing, has entirely stopped production, and so have the factories in Al-Sbina (south of Damascus), and the same goes for the factories in Aleppo. There are traders who have taken advantage of these emergency circumstances, and they are the ones now controlling the prices on the market, deciding them at will.”

It is exactly this hike in prices that pushed Um Joseph, 44, to rely on the second-hand market. “I hesitated to buy my daughter a pair of jeans because I was surprised that the price, even during a sale, was 7,000 Syrian liras,” she said. “That means that the jeans cost 14,000 Syrian liras before the sale, whereas the price of a pair of jeans at the used clothing store is no more than 2,500 Syrian liras, so this is really the only outlet we have left.”