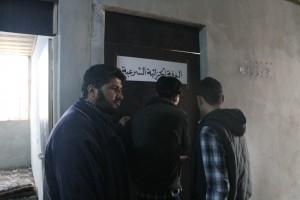 In January, diesel merchant Jamal al-Mahmoud, 36, turned to Kfar Nabel’s Sharia court in an effort to dissolve his business partnership following a disagreement with his partner. Mahmoud trusted the court; he believed it fairly imposed both discipline and order.

“In court, I felt like the revolution had succeeded, as if I were in the country we have been fighting for,” he said.

The Sharia court was established in November 2012 in a meeting spearheaded by five elders and lawyers from Kfar Nabel and attended by leaders of various military factions and a number of the city’s notables three months after regime forces withdrew. Kfar Nabel, which lies in the northeastern region of Syria with a population of approximately 30,000, is now controlled by the Foursan Al-Haq Brigade, which is allied with the Free Syrian Army, and the Souqour Al-Sham brigade, which is allied with the Islamic Front.

Mohammad Khayro al-Khateeb, the chief justice of the court, holds a degree in Sharia law and has been a preacher in Kfar Nabel’s mosques for over 15 years.

“This court is the nucleus of a free, independent, and honest judiciary derived from Islamic Sharia,” he said.

The court has is no written internal bylaws or legal texts that define its scope of work. Additionally, punishments are not determined through any specific law.

“Islamic Sharia forms our constitution, laws, and system,” Khateeb said. “Sharia determines crimes and their appropriate punishments.  Our references are scholarly texts on Islamic jurisprudence. We do not adhere to any one denomination. We are bound by the consensus of Islamic judicial scholars. In case of disagreement between them, we then decide which opinion seems most appropriate.”

Some of the books that the sheikhs rely on for their juridical decisions include Al-Haq by Al-Shafi’y, Al-Modawana by Al-Maliky, Al-Fatawa by Ibn Tymiya of the Hanbali sect, and Al-Mabsoot by Al-Sarkhasy of the Hanafi sect.

The court does not apply all forms of punishment specified in the texts, however, such as cutting off hands for theft, flogging unmarried adulterers, or stoning married ones.

“The principle of punishment in Islamic Sharia applies to all periods, but we do not apply them today because we are in a state of war. Instead, we replace them with prison, fines, or both,“ he said. He added that fines collected are paid to the court.

Eight people work in the court, which consists of a criminal chamber, a civil chamber, and a personal status chamber. These three chambers adjudicated more than 350 cases in 2013, more than 150 of which were criminal cases such as theft or fraud. Court sessions are open to the public and defendants are allowed lawyers. The court’s decisions can be appealed at the Sharia court of appeals in the neighboring city of Binch.

The court relies on Kfar Nabel’s security battalion to implement its decisions. The battalion was established by the city’s local committee and consists of 20 officers. During the past three months, the security battalion arrested more than 50 people mostly for theft, according to the unit’s records, which battalion commander Maher al-Alayyo showed to Damascus Bureau.

An example of how the court deals with cases of theft according to Islamic Sharia can be seen in the case of a Kfar Nabel resident who was accused of stealing four motorcycles and arrested by the battalion. Damascus Bureau was able to access the court files of this case. The court ordered the defendant to return the stolen goods and sentenced him to a year and a half in prison. They did not apply the Islamic sentence of limb mutilation due to the conditions of war, and because the motorcycles were not stolen from their owners’ homes, but from the street.

Before the armed opposition took control of Kfar Nabel, the city had one government-affiliated court that dealt primarily with personal status issues, in addition to some civil and criminal cases. The court did not meet the approval of the armed opposition since they regarded it as loyal to the regime. Today, it only adjudicates on personal status issues such as marriage because personal status related documents issued by the Syrian government in Damascus are still used both inside and outside the country.

Local officials say the biggest obstacle facing Kfar Nabel’s Sharia court is a lack of funding and the absence of a suitable prison.

“In cases where prison sentences exceed 15 days, individuals are sent to prisons in nearby cities and villages such as Binnish, Khan al-Sabal, or Ibleen,” said the chief justice. “We collect fees from the plaintiffs that are no more than 500 Syria liras (around 3 US dollars) for each case and place them in the court’s fund,” he added.

Khatib said that the fund pays a modest salary to judges, which amounts to no more than 100 dollars a month at best, in addition to purchasing stationary for the court.

Khatib says the bigger challenge facing the court is the lack of cooperation of the military factions, despite their recognition of the court. Chief Justice Khatib and security battalion commander Alayo both say that the leniency of the factions with their rogue elements has led to a breakdown of security and a proliferation of weapons in the city. The court and the security battalion cannot take any action against these practices because they are unable to confront the military factions.

The commanders of the Soqour Al-Sham and Foursan Al-Haq battalions in Kfar Nabel, Lieutenant Colonel Jamal al-Allouch and Abdel Qader al-Salloun respectively, deny that their soldiers lack discipline, considering this allegation to be a thing of the past that was solved once they dismissed many rogue elements from within their ranks. The two commanders insist that they want to support the court militarily. They added that they hope that the court would include Sheikh Abdallah al-Saadi and Sheiks Ibrahim al-Qassem to its cadre because they trust them and believe that their addition would give the court more legitimacy. The two sheikhs are members of the battalions and are part of the moderate Salafi movement.

Currently, there are no civil courts in the areas outside of government control in the suburbs of Idlib, where Sharia courts were established, as in the case of Kfar Nabel. Lawyer Mariam, 42, is from the suburbs of Idlib and prefers not to reveal her real name. She is critical of these courts and advocates for the implementation of Syrian laws that have been in effect since the 1950s.

“The uprising is for the overthrow of Al-Assad, not Syrian law,” she said.