Fleitani had stood out against the Assad regime, against injustice and tyranny, for decades, since Hafez Assad came to power 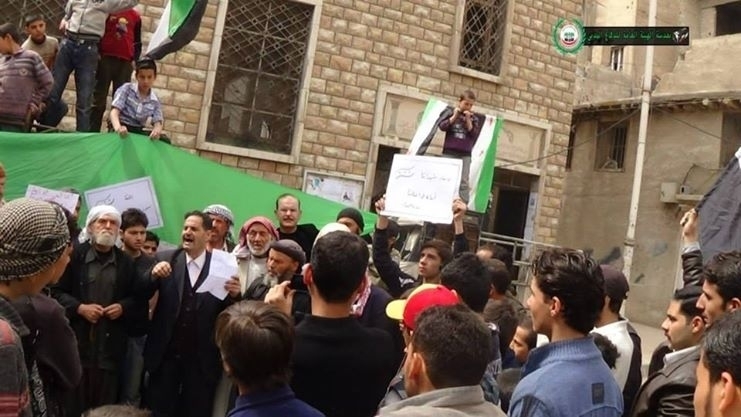 Amid the ongoing military campaign against Eastern Ghouta, which includes an assault of barrel bombs and other missiles, anonymous groups inside the area are assassinating the revolution’s peaceful activists.

One such tragic story is that of Mohammad Saed Fleitani, a 55-year-old opposition activist, and member of the Arab Socialist Union in Syria. Fleitani was just returning from his home in Douma, a free city, when an anonymous group – in a car with blacked out windows – shot him dead with an automatic rifle.

Fleitani had been completely devoted to the revolution since its first day, and dedicated himself to the struggle. The revolution did not make him, however: he was already an experienced activist, having stood out against the Assad regime, against injustice and tyranny, for decades, since Hafez Assad came to power in fact. Four decades of speaking out against the government allowed Fleitani to carve a political personality for himself, and he had become a well-known opposition figure.

He remained faithful to the ideas of a peaceful revolution and also insisted on staying inside his city, despite the catastrophic situation there. With his political record and his experience, Fleitani could have held important positions within the opposite outside of Syria, but he was committed to remaining at home, and believed that the revolution would not be genuine unless it was carried out inside the country, according to one of his sons, in a special interview for The Syrian Observer.

Fleitani fiercely rejected violence, and was unshakeable from his position, despite the transformation of the uprising into a military one. He often talked about the consequences of such violence and the possible long-term results of the militarization of the conflict. He continued to organize peaceful protests in his city, and political discussions. Life in Douma soon became unbearable due to the siege, and Fleitani organized a national campaign to raise awareness of the situation in Eastern Ghouta, publishing videos, images and reports about the horrific effects of the siege on civilians. But then he ended up with four bullets in his body, and became a martyr.

A sense of anger and fear pervades the atmosphere in Eastern Ghouta, controlled by both the Free Syrian Army and Islamist groups. People are afraid of these assassinations which are targeting political figures and activists considered to be revolutionary leaders, people who had called for the creation of a civil state through a political solution.

There have been assassinations in Douma for some years now, all carried out by anonymous killers. Dr. Adnan Wahbi, another well known activist, was killed a year ago, and less than two months ago, in a similar situation, Bassam Albasaleh, a peaceful activist from Altal city in the Damascus suburbs, was killed. And there have been others.

Information shared among activists inside indicate that 30 assassinations have targeted important civil and military figures over the last three months in the Eastern Ghouta, but with little information about who is carrying them out. And Assad’s army continues to lurk on the edges of Eastern Ghouta, trying to break in using every possible method.

As news of Fleitani’s, and others’, assassinations spread, accusations were thrown around. Some people accused the extremist Islamist groups that have managed to settle in the area, and believed the assassinations were their attempt to wipe out all civil activists, either by killing or kidnapping them, as happened to Razan Zaitouneh, the well-known activist, who was kidnapped along with her friends several months ago.

But others believe the killings have been carried out by sleeper agents working for the regime, whose mission is to eliminate revolutionary figures in an effort to take revenge and to spread fear among the besieged civilians, who cannot leave or escape death.

A spying network working for the regime has recently been discovered, according to comments from a military leader, the field commander of the Al-Rahman battalion on the Al-Mleha front. He also said that an inner network, specialized in assassinations, is being investigated, but that not all of its members are known as yet. But a few members have been arrested and confessed to certain crimes, including planting an explosive device in the apartment of a Ghouta public figure. They also confirmed their links to the Al-Khateeb security branch.

But quite asides from the fear of assassinations, the multitude of dangers in Eastern Ghouta make it a terrifying place to remain for all those who are trapped there. Dr. Adnan, who remains in Eastern Ghouta, said that he always feels afraid, and terrorized, as danger comes from every angle, with the ongoing shelling and bombs on top of the assassinations of well-known figures and activists.

“Those killers live among us and we have no way of detecting them, or knowing their intentions, or what has prompted the killing of all these people. I am afraid that I will be the next victim, being one of the first activists in the revolution by simply carrying out my professional duty and treating the wounded, along with my revolutionary work.”

Activist Yasser echoed the doctor’s comments: “I am afraid to move around in my town or elsewhere in Ghouta, or even to appear in public, because of the possibility that someone is tracking my movements. We have lost all sense of safety. We feel trapped by death, terror and a pervasive fear of everything.”