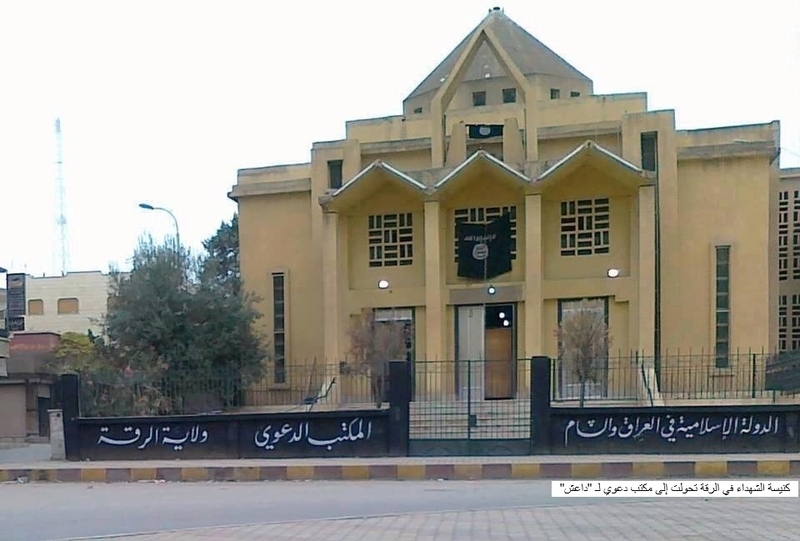 “Raqqa is sad, and it has begun to wear black day after day. We had spoken about it as if it was the first groom of freedom and it greeted its wedding party in groom’s garb, but its clothes have been covered in soot.” Doctor Jirjis described his home city of Raqqa with these words at the opening of his speech to All4Syria, three months after fleeing the city. Jirjis was one of the few Christians of Raqqa who had refused to flee, though the security situation had clearly deteriorated and jihadist groups linked to al-Qaeda gained full control over life in the city, and he only left after spending a full year under the authority of the “Islamic State.” Though Jirjis ultimately decided to depart the area for Germany to request asylum there, he left his memories and history in the city in which his parents and grandparents had lived.

The “emirate of Raqqa” or the “capital of the caliphate” has become a main headquarters for what is called the “Islamic State,” which has declared Raqqa its capital. The city’s streets and walls are covered in signs and graffiti calling upon the inhabitants of the “province” to follow Islamic shari’a according to the “caliphate’s” interpretation. Most Syrian government buildings have been converted to the offices of that group, and it is worth noing that the Sayyida al-Bashara church in the center of Raqqa has been converted into the Islamic State’s proselytization office, after members of the group removed the church’s cross on September 26 of last year.

This development did not pass unnoticed by Raqqa’s principled activists and inhabitants. The day the cross was removed, they launched a demonstration, denounced the behavior of the Islamic State’s fighters, and denounced the cross’ removal, carrying it to return it to the interior of the church. The activist Su’ad Nawfal was among these demonstrators, and her participation created a threat to her life, forcing her to leave the city. She now lives in Turkey.

Nawfal told All4Syria that the reasons for her departure from Raqqa are that she is now “followed and wanted by both da’ish (“the Islamic State in Iraq and the Levant,” now “the Islamic State”) and the regime, and that my blood is in danger of being spilled because I have rejected what the Islamic State has done, including its occupation of churches and its theft of the province’s valuables, in cooperation with other armed groups.”

The Christians of Raqqa and the Islamic State’s Jizya

The Islamic State has not only exercised its authority over Muslims. They have also imposed the jizya (or Islamic protection tax on non-Muslims) on the Christians of the city, thereby “requiring that the Christians must pay the jizya for each male among them, amounting to four gold dinars for the wealthy, half of that amount for the middle-class, and a quarter of that amount for the poor.” The compact is called “the first dhimma (protected non-Muslims subject to taxation and forbidden from carrying weapons) agreement in the Levant between the Islamic State and the Christians of the province of Raqqa.” The text also stipulates that “[Christians] will not build in their city or its environs a new monastery, church, or priest’s hermitage, or rebuild those which have been destroyed.” In addition, “they will not display a cross or any portion of their books in any of the Muslims’ streets or markets, and they will not use megaphones in the performance of their prayers or in any of their rites.”

A Christian from Raqqa still living in the city who requested that his identity not be revealed reported to All4Syria that “da’ish has legislated the imposition of the annual jizya on men, beginning with 25,000 Syrian pounds ($150) on the unemployed, 50,000 pounds ($300) for the employed, and 100,000 pounds ($600) for owners of property and commercial establishments.” He added that “people cannot afford these newly-imposed taxes.” He also noted that “many Christian families that have fled Syria were forced to leave their belongings to their Muslim friends and neighbors in improvised contracts, fearing da’ish’s ambitions and seizure of their property.”

Su’ad, the activist, indicated that “everyone is aware of da’ish’s jizya, and it will not negatively impact Syrians’ ability to coexist at all, because da’ish is not a part of the social fabric of Raqqa in particular or of Syria in general.” She emphasized that “we are a people who love everyone, but in Raqqa the number of our Christian brothers has been diminished. They were expelled following da’ish’s occupation of their churches at the end of September, 2013.”

Syria is considered the cradle of Christianity’s denominations and eastern churches, and it was the native country of priests, prophets, saints, and monks. Indeed, there are dozens of monasteries and hundreds of churches and holy sites important to Christian history and human civilization in Syria’s cities and towns.

Doctor Jirjis decided to flee Raqqa when he realized that he would be unavoidably executed or “liquidated” as other activists had been after the Islamic State accused him of kufr (being an infidel), secularism, and following Satan. Jirjis requested that All4Syria only mention his first name, fearing for his few relatives who remained in the city after most had fled. He told All4Syria about the last moments before his flight from the city: “the faces of the people of Raqqa were sadly looking back to a not-so-distant past in which they lived in security and freedom in all facets of their lives for a matter of weeks following liberation in March 2013, until the story of Raqqa became one in which extremism plays and which soot covers.” He added that “even the Euphrates was pale at my farewell; once my city was the bosom of the Euphrates, but it became a black mark on the brow of every revolutionary and everyone who carried arms in defense of this country. Most of its people and youths have left in fear for their lives due to the Islamic State’s most recent practices.”

The Christians of Syria belong to a number of churches, and most of them speak Arabic as their mother tongue. Many of their churches use Arabic as their liturgical language, in addition to ancient Syrian Aramaic (Syriac).

Doctor Jirjis is one of Raqqa’s native sons, and lived in the city with this family for many years. After the outbreak of the Syrian revolution that aimed to overthrow the existing regime in the middle of March 2011, Jirjis became involved in the revolution and worked as a volunteer in a field hospital until his departure. Speaking about his work, he said that “it was uneasy – members of the Islamic State imposed themselves upon doctors, canceling ambulance runs for the wounded and forcing doctors to care instead for a member of their group.”

The text of the “first dhimma agreement in the Levant between the Islamic State and the Christians of the province of Raqqa,” published on February 26, 2014

[Christians] will not build in their city or its environs a new monastery, church, or priest’s hermitage, or rebuild those that have been destroyed.

They will not make Muslims listen to the recitation of their books or the ringing of their bells, which they will ring inside their churches.

They will not engage in any acts inimical to the Islamic State.

They will not prevent any Christian from converting to Islam is he desires to do so.

They will not engage in the trade of pigs or wine with Muslims or in their markets, and they will not drink wine publicly.