Four fierce raids were carried out by warplanes, leaving over fifty dead and hundreds injured. 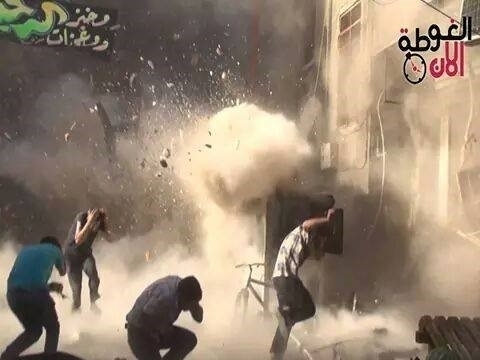 “We can only hear wailing, smell burning flesh and death, and watch body parts scattering. Only minutes ago I was talking to my neighbor and now he is a martyr. Birds have left our skies and planes of death have occupied them, we live in continuous horror.”

Aram Saleh, head of the Syria Press News Agency, used these words to outline the scene right after a neighborhood in Douma had been targeted by two thermobaric weapons.

Four fierce raids were carried out by warplanes, leaving over fifty dead and hundreds injured.

Twenty-eight people were killed in the Douma Massacre on Sunday August 3, 2014. This included the medical staff of the Unified Medical Office and a number of cameramen who usually run to document the results of shelling. Over eighty were injured as a result of two attacks that targeted a crowded neighborhood with two thermobaric weapons. This information was confirmed by the General Authority of Civil Defense, while one of its members, Firas, pointed out that “medical and ambulance locations are full of dozens of the injured, including women and children.”

Kafr Batna, a city in Easter Ghouta, was simultaneously bombed intensely by warplanes that targeted a public market and left 25 dead and over a hundred injured, according to the information office of the coordinating committee in Kafer Batna. This included a number of bodies that could not be identified because they were reduced to shreds. A fourth raid targeted Saqba and left a large number of injuries. Kafer Batna recorded five deaths after yesterday’s similar raid.

The first raid that targeted a crowded neighborhood in Douma was followed by another raid only a few minutes later, which killed a large number of people and caused several serious injuries, according to the media activist Yaser Al-Doumany. Al-Doumany also said that the killing of this large a number of civilians was deliberate— the second raid was carried out after several medics, civilians, and media staff had run to save the injured, which raised the number of injuries dramatically.

The large number of injuries made doctor Majed Abo Ali, a member of the Unified Medical Office in Douma, resent the fact that all parties are ignoring  the suffering of Eastern Ghouta. He indicated that all medical locations are running out of their blood bags and serum supplies because of the high daily consumption and the extent of injuries.

This suggests that the regime deliberately killed all those people, and that they don’t want the trend in the number of deaths between August 2013 and August 2014 to change.

Only a few hours ago, the Army of Islam (“Jaish Al-Islam”) announced the capture of a booby-trapped car driver who was driving through the city coming from Moukhiam Alwafideen, which is controlled be the regime, while two members of the engineering unit died while they were trying to deactivate the bomb.

A large explosion rocked the town of Almleiha in Eastern Ghouta this evening. Reports said that it was caused by the bombing of a booby-trapped BMB tank on one of the regime army points. The Al-Nusra Front group posted photos on Twitter that show a man they claimed to be Abo Alaa Altunisi of Al-Nusra Front standing near a BMB tank full of explosives leaving his friends before the operation. [Al-Nusra] said that he was able to kill a great number of the regime troops at one of the town’s fronts, and that this operation was the second one for Abo Alaa Altunisi, “since he carried out the first one a month ago by remotely exploding a parked booby-trapped BMB tank to break the siege on the fighters pinned down inside the town. This was followed by several clashes at the town’s battlefronts. Two land-to-land missiles, mortars, artillery, and tanks projectiles were [also] fired at the town and its farms.