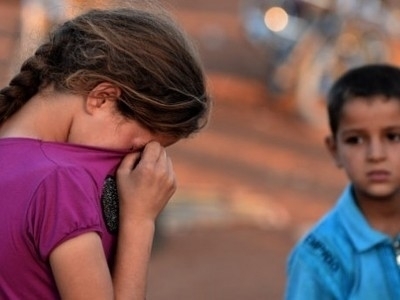 When Ghalia, 30, married the Moroccan jihadist Abu al-Yaman, she never thought about her children's identity or what might happen to them.

She never thought about "the possibility of losing him in battle," she says.

Ghalia is from the liberated countryside of Lattakia. Her father respected the jhadist's desire not to reveal his real name when he brought the sheikh to marry his daughter, "because jihadists don’t tell their real names for security reasons," she explains. He never thought of the disaster his daughter and her two children would suffer as a result, by taking the family name of their mother.

Two years after Ghalia was married, her husband was killed in a battle against the Syrian regime. She faces a problem with no clear outcome for her and her two sons.

Ghalia blames herself, saying that being 28 years old when she married she should have thought more carefully about the matter.

"Children of marriages between foreign jihadists and Syrian women from Aleppo are not registered," explains Raed, who clarified that this happens only in the rebel-held areas. The situation is completely different in areas held by the Islamic State, he says, where the children are registered under their mothers' names in councils dedicated to organizing these matters.

If a foreign jihadist wants to marry a Syrian girl, the marriage takes place through the sheikh, without any referral to the Shariah Commission or the Local Council to document the marriage.

But according an activist in the countryside of Lattakia, Saleem, "this is not the case in all regions. The marriages in this town are documented in a Sharia court. This marriage is not common in Lattakia, and the Nusra Front has established offices in the region to document marriage contracts," he explains.

The activist says there are jihadists from different nationalities in Syria. Chechen jihadists don’t marry Syrian women because of the language barrier, he says, but marry Turkmen women to be able to communicate. A Moroccan jihadist married a Syrian girl from Hiffa, in the countryside of Lattakia and their marriage is successful.

"The Moroccan and Chechen jihadists are among the best jihadists in Syria," he says.

Qais Abdullah ash-Sheikh, one of the founders of the Free Syrian Judiciary, says that marriage should be made according to Sharia and should be based on the agreement of both parties. The agreement, he says, cannot be guaranteed if the real name of one party is not known, because this will deprive the wife and the children from their rights.

Sheikh explains that if the two parties decide to divorce, "we cannot ask an anonymous person to pay the expenses".

"Because the parentage of the children is not clear, they will be deprived from patrimony rights. If the name of the husband is unknown, how can the wife claim his inefficiency for marriage? In addition, the wife may contact another person and it will be hard to investigate the case. The same applies to the husband," he says.