Education is sponsored by states with differing ideologies 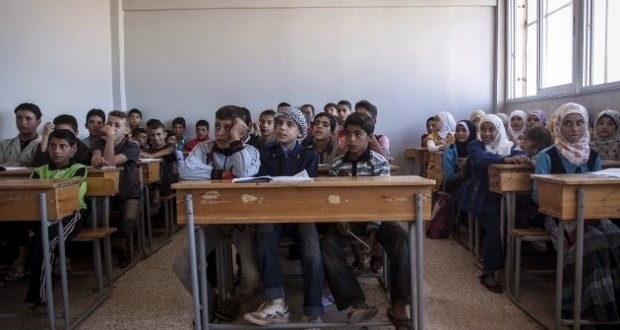 Syrian schools in opposition-held areas, refugee camps and neighboring countries are subject to the mood of the funding organizations. This makes Syrian children vulnerable to crimes that may be committed under the guise of education, and threatens Syrian society with the projection of fundamentalist projects in the future.

Statistics published by United Nations Children's Fund, UNICEF, raised the alarm when it said that 3 million Syrian children are displaced inside Syria, including 1 million out of school, in addition to 1 million likely to leave school, while 255,000 have access to non-formal education.

According to the Syrian regime Ministry of Education, 4,373,522 attended school in the current academic year, including 107,374 in kindergarten, 3,749,113 in primary education, and 475,303 students in secondary education.

On the other hand, there is no precise statistics available about the number of Syrian children receiving education in opposition-held areas, especially as the education process in these areas faces great difficulties such as the lack of buildings that regime forces purposely bombed and destroyed, and the lack of qualified staff to teach, making the educational process almost impossible.

The difference between the regions is due to different dominant groups and the agendas of supporting organizations.

The Jordanian Ministry of Education said that the number of Syrian students had reached 115,000 students until the beginning of 2014, with the expectation it will rise to about 140,000 students by the end of the year.

According to data provided by the United Nations High Commissioner for Refugees during the last academic year, more than half of Syrian children at school age in Jordan do not go to school.

Some reports considered that the most serious threat facing Syrian children comes from education in Turkey, where the schools are divided between two basic ideologies: the first is sponsored by organizations and institutions belonging to the Muslim Brotherhood, which is considered moderate if compared to the Wahabi ideology which enforces itself strongly in schools supervised by the Saudi sheikhs who provide the necessary funding and support.

Syrian activists said that about 85% of Syrian schools in Turkey are characterized by a religious orientation. They teach the child ideas which encourage "jihad".

The activists added that the schools supervised by the Coalition did not stray from the religious orientation, even after adopting the Syrian modified curriculum, as the practices of the teachers have not changed.

The Syrian Center for Children Rights emphasized that ignoring the issues related to children and their education could be an obstacle to any peace project in Syria, especially that the systematic teaching of ideologies in the hot areas and some neighboring countries is enough to create generations of extremists, that will stand in front of all peace projects.