“I have been inhaling this substance for about seven months, it makes me happier than I have ever been before.” 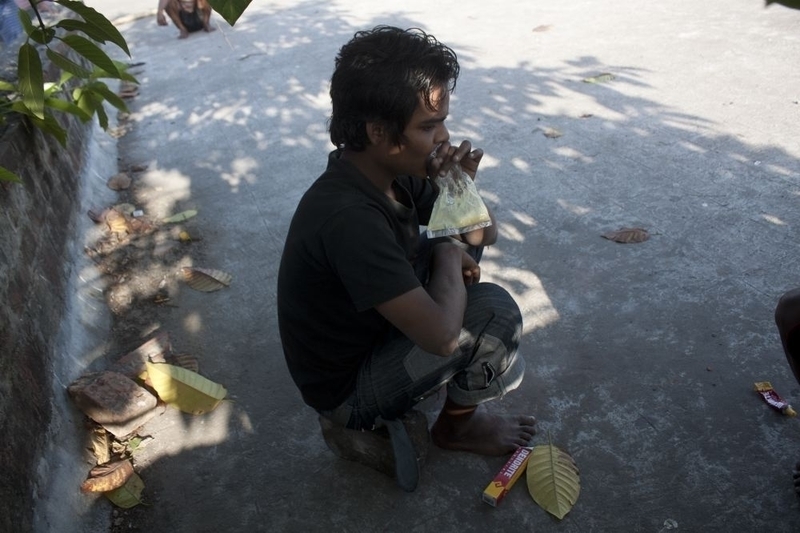 Addiction to volatile solvents like “Alshele glue” is not just an inevitable way into drug use. It has also become a mobile means of violence that could kill its users or send them to prison, despite the lack of explicit legal regulation.

“It is my only friend,” said Ahmed, an ecstatic young boy we talked to in a Damascus street. He had just inhaled some of this substance from a plastic bag. He continued, “I have been inhaling this substance for about seven months, it makes me happier than I have ever been before.”

Before 2011, when the protests against the Syrian regime began, the addiction was found in many areas of Syria. It was known as “volatile solvents addiction,” and people used Alshele glue because it was cheap. The addiction soon vanished, or was marginalized, because of the escalating bloody events spreading throughout Syria. However, the addiction spread again four years later, not only in Damascus, but also in nearby countries of Beirut and Turkey, where many homeless Syrians fled to escape the Syrian war.

In a place near Taksim Square in Istanbul, Amer told the story of his escape. He came to Istanbul with his mother, running away from the deadly missiles that killed his father and destroyed his house in Al-Bab city of Aleppo. He stood there holding a box half-filled with cookies and biscuits, almost begging people to buy just one piece. Later, when he felt tired, he sat a small distance away with a friend, silently taking out bags carefully tucked inside their sleeves. The bags were full of an adhesive called Alshele glue, which they eagerly inhaled while their bodies, they said, were filled with pleasures and ecstasy. Amer said, “I sometimes feel dizzy, like I’m on a spinning ride, and sometimes I black-out completely, and wake up later to find myself in a different place.”

It is clear, according to medical reports, that once this substance is inhaled, its fumes replace oxygen, which leads to dizziness. The frequent inhalation could lead to epilepsy, due to the toxicity of the substance. This can damage the body’s organs, especially the lungs, bronchus, and brain, as well as blood cells, and could eventually cause suffocation and death.

The glue’s effects begin with a kind of alertness and thrill. It generates a sense of euphoria, in addition to severe dizziness, and a feeling like drunkenness, often manifesting as loss of coordination, slurred speech, a short sense of euphoria and dizziness. Users typically feel light headed and might experience hallucinations, making them imbalanced and with altered perception of sounds and shapes. Frequent inhalation might cause the loss of self-control and a tendency to use violence that could lead to the death of the user or put the lives of people around them at risk.

“I used to meet with my friends around midnight, when I was done with my job washing car windows in Al Mezze Street. I used to sell clothes in the streets in Alhajar Alaswad area before the war, but I came here to save myself after my neighborhood was destroyed,” said Khaled. Khaled, a 15-year-old boy, used to spend his day washing car windows as cars stopped at traffic lights on Al Mezze Street in Damascus. “I haven’t inhaled for over a month because I am so afraid,” he said. When asked why he stopped, he answered, “I don’t want to end up dead like Mustafa.”

Khaled and Mustafa were best friends who used to meet every night to inhale Alshele glue. But Mustafa grew somewhat violent. Khaled said, “Mustafa had a small pocket knife that he used to play with after he had inhaled. I used to be so afraid he might hurt me, but he never did.” Khaled told us that one night after they had inhaled several times, Mustafa had a headache and started screaming, which drew the attention of a young man walking by. Mustafa went to the young man asking him for money to buy painkillers, but the young man refused to give him money so Mustafa took out his knife and threatened him. The young man suddenly slapped Mustafa and escaped, returning a couple of minutes later accompanied by men wearing military uniforms. They were members of the so-called Popular Committees, and though Mustafa tried to escape, they followed him and took him away to an unknown location.

Khaled never expected to see Mustafa again, but a week later, Mustafa was there wearing a military uniform. Khaled said, “I was surprised to see him, he was wearing a military uniform and told me he was now working for the Popular Committees. He gave me some money and some tablets and went away. The tablets were Captagon, which Mustafa started using after he joined the Popular Committees. A month later, Mustafa came back dead.