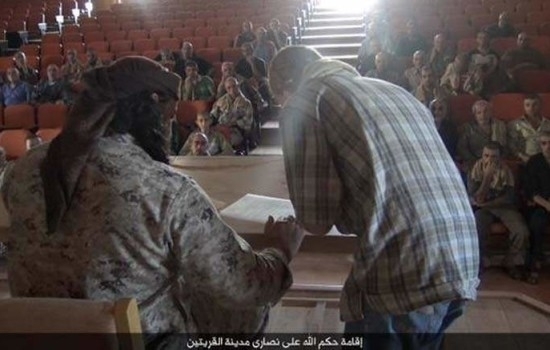 ISIS imposed jizyah tax on male Christian adults in the town of Qaryatain located 90km (60 miles) east of Homs, which the extremist group described as implementation of a 1,377-year-old contract named “Dhimmi Contract”.

The main tenets of the “Dhimmi Contract” are similar to the “Omari Declaration”, a historical declaration issued by Caliph Omar Ibn al-Khattab to the Christians of Jerusalem when Muslims entered the city in 15 AH (636 AD). The declaration begins as follows: “Abu Bakr al-Baghdadi, the servant of God and Emir of believers, hereby guarantees safety to the Christians of Damascus and Qaryatain. Their properties and assets shall be protected as well, and they shall not be forced to convert to Islam.”

The “Omari Declaration”, however, stipulates 12 conditions in exchange for such protection. Baghdadi prohibited the construction of churches, monasteries or hermitages, and banned public prayers or any act of aggression against the Caliphate. Other conditions included a jizyah tax that obligated Christians to pay one to four gold dinars per adult male depending on their overall wealth, with a provision that allowed them to pay the tax in two installments.

The reason that gold dinars were used for tax payment was because their weight and value were widely known and were stable. One dinar weighed 4.25 grams, so the affluent were required to pay 17 grams of gold – equivalent to $650 nowadays – and the middle class paid $325 per year and the poor $160.

The “Omari Declaration” also forbade Christians from owning weapons and trading pork and wine, and enforced the Islamic rules concerning trade and clothing. The declaration also affirmed that Christians would not have to pay 10 percent of their income in zakat (Muslim tithing) unless their income originated from trade outside the borders of the Caliphate.

The “Omari Declaration” warned that if Christians of Qaryatain violate the contract, the Caliphate would be released from its obligations and be given the right to take whichever measures necessary to suppress belligerents of a war or a rebellion.

Although ISIS blurred the name of the Christian signatory of the contract, his name seemed to be “Isa Ibrahim”; the red stamp of the counter-signatory bore the titles of “the Islamic State, the Caliphate, the Office of the Judiciary, and the Emir.”

Since August, ISIS has controlled the town of Qaryatain as part of its plans to overrun the eastern suburbs of Homs after the group captured the ancient city of Palmyra two months ago.