Was the aim of the Russian defense minister's visit to Syria an act of contempt against Assad in an attempt to portray him as being obedient to Russian orders? 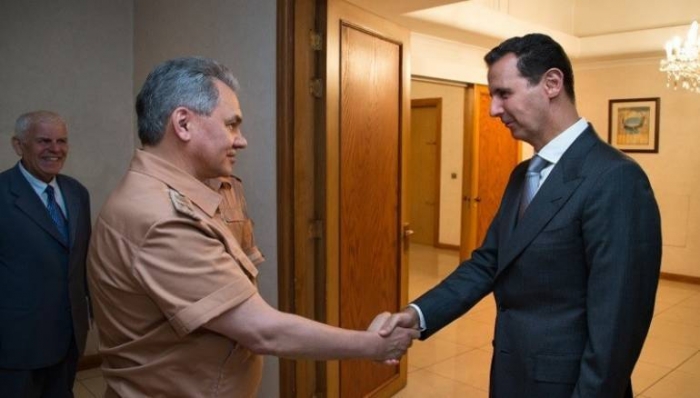 Criticism from the Syrian opposition was frenzied following Russian defense minister Sergei Shoygu’s surprise meeting with Bashar al-Assad, with critics describing the president as lacking in sovereignty, dignity and as a student sitting before his master. But these sidestepped a much bigger issue, with commentators failing to conclude the contents of the visit and what it could mean for the Syrian people.

So was the aim of Shoygu’s visit an act of contempt against Assad in an attempt to portray him as being obedient to Russian orders?

What is the nature of the relationship between the visit and events on the ground, the opposition’s advance in Aleppo’s northern countryside, and the retreat in Iranian influence? And what is the regional atmosphere surrounding this visit – in Turkey, Qatar and Saudi Arabia – and are we at the cusp of a new stage in the Syrian crisis in the shadow of Russian warnings that Syria will end if this war does not?

Amidst implicit approval from Washington and a number of key players, it appears Russia has been given the responsibility to govern Syria through its crisis. Even the Syrian opposition – whether the High Negotiations Committee or the National Coalition – have few reservations about Moscow playing a role that eventually leads to an end of the war, even if the solution leans towards the Russian hand more than any other.

In the formal sense Shoygu’s visit, the first of its kind by a Russian defense minister, suggests that we will witness the rule of a stronger military regime who will govern Syria in the coming phase, and there is no one more suitable to engineer this than Shoygu himself.

In 2013 a suggestion was circulated to employ a joint military council, hosted in Algeria, to lead the transition phase, but the intensification of regional conflict took the Syrian crisis along a different path.

Moscow may choose to follow through with forming the proposed council from regime officers and the internal opposition, and it is likely new figures from all political parties will be announced with a good international standing.

For the first time in the history of the Middle East the Israeli-Russian coordination takes precedence over the US-Israeli pact as Moscow’s influence has increased in the Levant. In September 2015, less than three weeks after Prime Minister Benjamin Netanyahu visited Moscow for a meeting with President Vladimir Putin, Russia surprised the world with a direct military intervention in Syria, shaking up the international and regional cards.

The issue was clear; any intervention represents a service to Israeli interests, as in the first week of June this year, Netanyahu renewed his visit to Russia, which was closely followed by Shoygu’s visit to Syria two weeks later.

Based on reports by Israeli analysts, the Syrian crisis is close to being solved – one way or another – and the war must be stopped, so that the state does not enter into a stage of complete security breakdown, an issue of concern for Israel especially along the border with the Golan.