All4Syria interviews Syrian refugee workers in the markets of southern Turkey, "we were surprised to see the grocery had a Syrian working there, and then the tailor, and the butcher... It’s a good step and it’s helped us acclimatize quickly" 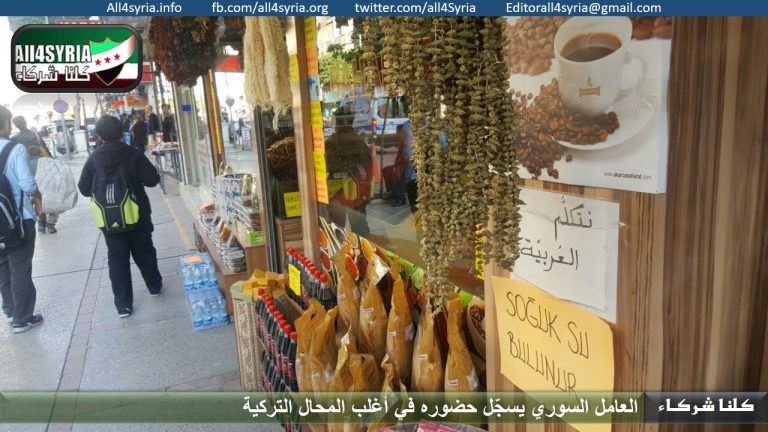 Over the last five years, it has become necessary to have at least one Syrian worker in every store, workshop, or even stalls at a Turkish market as an inevitable result of the large number of Syrians living in Turkish territory.

The Turks have not stopped at merely employing Syrians — indeed, in an indication of that, many advertise, “We speak Arabic,” on the door of their shop to draw Syrian customers, on whom the daily market economy has come to depend.

Latin, a woman from the Aleppo countryside living in the Turkish city of Gaziantep, told All4Syria: “We came to Turkey two years ago, and we were surprised to see the grocery had a Syrian working there, and then the tailor, and the butcher. If you just go into a corner store or shop you’ll find a Syrian worker receiving you, and explaining the items to you, and helping you with the language. It’s a good step and it’s helped us acclimatize quickly to life in Turkey.”

In the main Marsin market you can find Syrians at the doors of shops calling out the wares in Syrian accents to draw in customers, to the extent that commercial shops have come to depend 40 percent on Syrian customers, according to what Abdullah, who works in a clothes shop, told All4Syria: “Here in the market most of the customers are Syrians — even the owner always tells me Syrians love to constantly buy clothes. Here in the market you can’t find a store that doesn’t have a Syrian to help with Syrian customers.”

The Syrian worker needs to speak Turkish in order to form a link between the seller and the Arab customer. There are some workers who earn high wages because their language is strong, and any store that needs a Syrian worker confirms their language as a basic condition.

We go into one of the shops to speak more, and the Turkish shop owner comes (buyurun, buyurun) and then indicates to us he’s going to call Mohamed (bir dakika, one minute) and Mohamed comes, who had been on lunch break. He confirms the ease of a Syrian obtaining work in Turkey quickly, apart from the fact that the working hours are very exhausting: “We work 12 hours, and sometimes maybe 14 hours, and we were not used to that in Syria. But we have to do this because there’s no alternative apart from working as anything.”

The Syrian worker earns between 30 to 60 Turkish lira for his work as a seller or a translator for Arab customers, which is a good salary according to most of the workers whom All4Syria met with, both in Marsin and Gaziantep, especially considering any man can work in this profession without experience, because his Turkish language skills and skill in attracting customers is the basic requirement.

More than 3 million Syrians are living in Turkey, half of them are young men who are working in various fields, with the condition that they have to obtain an official work permit, which means most workers take whatever work they can, as income rarely even finances the cost of daily expenditures.