Opposition outlet Souriatna reports on the growing discontent among some Lebanese citizens toward Syrian refugees, claiming some cities have conducted public campaigns to smear workers and close shops belonging to Syrians as a result of a saturated cheap labor market 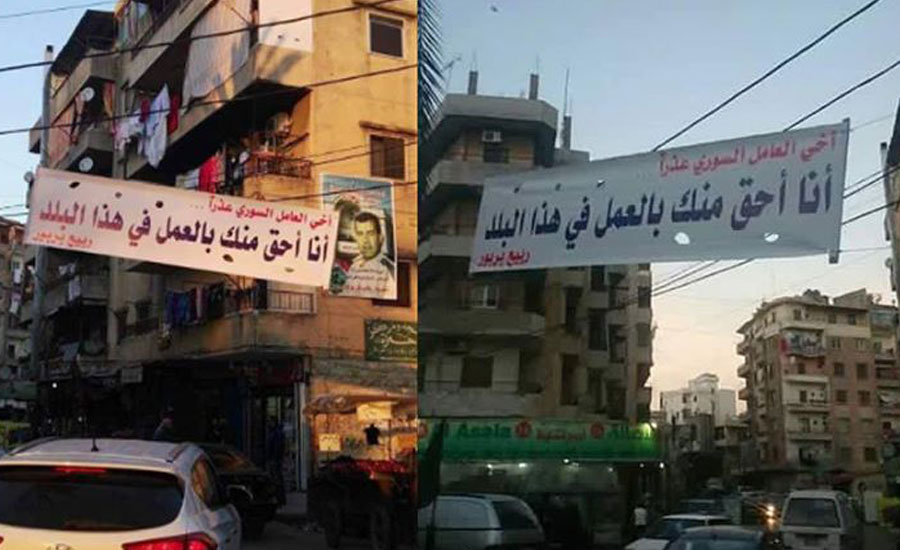 Cases of harassment against Syrian refugees by official institutions in Lebanon have increased since the start of this year as Syrian stores face forced closure, while a number of signs opposing Syrians have spread in Lebanese cities demanding that Syrian workers be prohibited from work.

Tensions have risen among Syrian refugees in Lebanon as a result of the municipality of Zahle closing dozens of stores owned by Syrians, as well as others belonging to Lebanese citizens accused of employing Syrian refugees. A number of other Lebanese municipalities have made clear their intention to shut down Syrian stores and to prevent them from carrying out most professions. Last week Kfar Rumman in Nabatieh and Beddawi in Tripoli joined the list of towns that have restricted Syrians from working in specific professions.

The severity of the restrictions imposed by the Lebanese municipalities on Syrian refugees has increased after Prime Minister Saad al-Hariri warned against the collapse of the situation in Lebanon as a result of the Syrian refugee crisis, describing it as a “time bomb.” Previously one of the most prominent defenders of Syrian refugee rights in Lebanon, Hariri’s comments indicated a change in the policy of his Future Movement party toward Syrian refugees.

Alain Aoun, an MP from the Change and Reform parliamentary bloc, said on Thursday that opening the Lebanese markets to Syrians was not simple or easy, and that Syrians do not work in Lebanon to contribute to the economy, adding that the money they earn leaves Lebanon. However, the World Bank has stated it believes that Syrians are working in Lebanon according to and within the Lebanese system.

The Lebanese MP added in a television interview that, “There are risks from Syrian labor that are not solved simply, and there is informal work that does not contribute to the Lebanese economy, as with the process of naturalizing the Syrians.”

Since the start of 2017, Lebanese authorities have been closing Syrian shops without clarifying the legal reasons, only to prevent Syrian-Lebanese labor competition.

The Lebanese Labor Ministry, meanwhile, justified the closure by saying the Syrian shops had harmed commercial enterprises and labor in the country.

Many road signs have been seen in the heart of the Lebanese capital Beirut and a number of other cities carrying slogans such as “My brother Syrian, the United Nations assists you, and who assists us?” in order to rally the Lebanese street against Syrian refugee labor and to blame them for the poor economic situation which the country is enduring.

This discontent has developed into what resembles campaigns in a number of areas calling for Syrians to be barred from working and opening stores.

Baalbek witnessed a sit-in of shop owners and professionals under the slogan “We demand the closure of Syrian shops and interests in all forms in the governorate of Baalbek-Hermel and an end to Syrian labor which has increased the rates of unemployment among Lebanese workers,” according to the National News Agency.

Commenting on this report, the Syrian Economic Forum said: “Most of these funds came to Lebanon illegally after the eruption of the conflict in Syria in 2011, and so they have not been transferred legally from Syrian banks to Lebanese banks, but smuggled secretly and placed in Lebanese banks in the form of deposits.” It added that, “The Lebanese government and its security agencies are close to the ruling Syrian government.”

70 percent under the poverty line

The number of Syrian workers with valid work permits in Lebanon is estimated at 7,000, while the real number of those working in various professions is up to 700,000, concentrated in construction, cleaning and dining, in light of the small amounts of money accepted compared to the service they perform.

Lebanon is one of the most prominent examples of Arab countries receiving Syrian refugees, whose numbers reach over 1.5 million according to U.N. reports, most of them living in harsh economic conditions.

The U.N. High Commissioner for Refugees in Lebanon announced that the number of refugees who had fled the war and registered with it had reached 1,017,433.

A study prepared by the United Nations said that 70 percent of Syrian refugees in Lebanon live below the poverty line, and that the refugees were still affected by what it called external shocks and depended primarily on humanitarian assistance.

Lebanese law prohibits Syrians from performing most types of work and professions, especially after the decision of the Lebanese Labor Minister Sejaan Azzi to prevent Syrians from performing all professions with the exception of agriculture, cleaning and construction, pushing Syrians to work stealthily at lower prices and without any guarantees or security. Meanwhile, the decision has also made Syrians subject to exploitation and blackmail from employers.

As a natural result of the lack of laws preserving the rights of Syrian workers, last Friday the Choueifat road toward the town of Khalde witnessed a sit-in of about 50 Syrians working in Lebanon objecting to the fact they had not been paid their salaries for two months, according to a refugee coordinator in Lebanon.