Souriatna speaks to female reporters about their experiences in the field, hiding the truth from family members, and what it was that drove them to work in the most dangerous country for journalists in the world 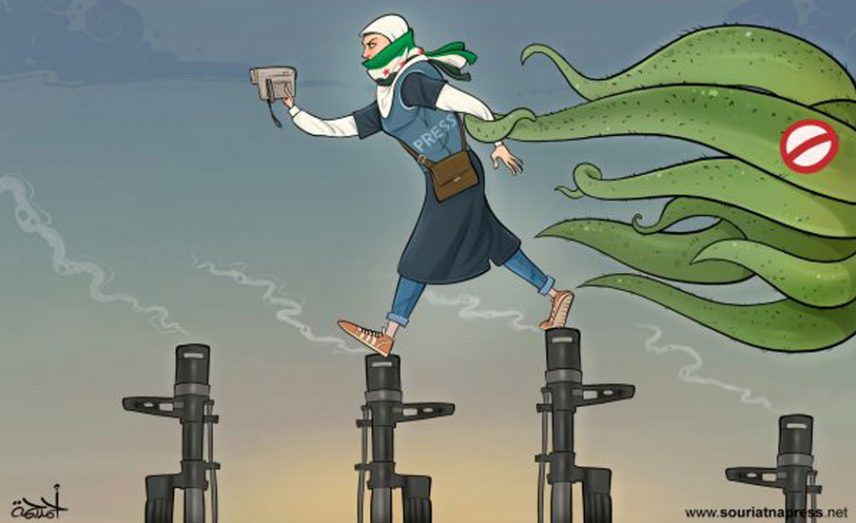 Undeterred by the perceptions of society and the immense dangers of the work, Syrian women journalists in liberated areas are pursuing their work with seriousness and relentlessness.

Despite their small numbers, they have proven themselves, and with great merit are able to work in the field in the most dangerous locations for journalists in the world. Some have lost their lives or their children, or a family member or more, and have continued the path, confronting all that this crisis throws at them.

In southern Syria, women journalists, photographers and activists number no more than 20, according to the journalist Nada al-Zouabi. In the north the number is about the same as the south, with most operating in the city of Idleb and its eastern countryside.

Zouabi was arrested by the regime in Daraa in 2011, only to be freed months later. She then headed to the countryside to continue her activism secretly, with her arrest becoming a motivation for her to document regime crimes. She told Souriatna: “A year after my work as an activist, I told my family about the matter, and the news to them was like a thunderbolt. At that time the punishment for activism was death.”

Zouabi’s family strongly rejected her work, afraid she would be arrested again, but her enthusiasm eventually won them over in the end.

Her work as a media activist did not stop her from continuing her life. She got married and gave birth, becoming a mother and a journalist at the same time. She has been wounded twice, traveling to Jordan for treatment and returning every time to continue her work. “Despite my injury and being separated from my husband and other challenges, I’ve continued my work. This is my right and it’s necessary for me, whatever the results,” she said.

Selwa Abdel Rahman, a 40-year-old media activist in Idleb city, lost her husband and became responsible for caring for her children on her own, without support or work to assist her. She says: “I was interested in what was being published on websites and newspapers. I saw female names on the articles, which made an impact on me, and I asked: How can I express myself, like them?”

Her friend recommended that she participate in a media training event for women in Idleb, and so she joined. “I told my family that I would like to work. They opposed it in the beginning out of fear for me, but I convinced them that it was work related to writing and there was no danger in it, and they agreed.”

Abdel Rahman said that her work helped provide for her family and that she didn’t need to justify it to anyone, however the biggest obstacle she faced was caring for her house and children. “My children need constant care and they don’t have anyone but me, and my daughter is taking her baccalaureate. I’m facing all this with patience and hope, completing the journey with them, and I hope that the future will be better,” she added.

Abdel Rahman said she wanted to encourage Syrian women journalists to work in the field, and not to be content behind computer screens at home. “My message to every woman that wants to get a job and not depend on men, is that she needs to develop her skills and that we can have no incentive or supporter greater than ourselves,” she says.

Many women still work in secret. Sanaa, who works in radio, told Souriatna: “A radio training session was announced in Kafranbel for women, and I joined in the beginning for entertainment and to fill free time, since, because of the war, I’d left school and had been stuck in the house.” Recognizing her strong voice, the course trainer encouraged her to work in the industry.

Sanaa said she enjoyed her work and believed in it, and agreed with a relative that her work would remain secret from other family members. “I told my family that I was working in data entry at an NGO, until the day came when my cousin came angrily to tell my father the truth.”

She said her father was furious, explaining that revealing her voice to everyone was shameful in his eyes. “Despite the problem that occurred and the opposition of my family, I did not stop. I continued my work in written reports and non-radio work, and I hope to go back to it one day,” Sanaa said.

Most female journalists Souriatna spoke with said their first contact with the trade was a reason for their strength and attachment to journalism, but some admitted they had bad experiences.

Sanaa said: “I worked with an institution and they didn’t give me the same rights as other workers. They curbed my ambitions and prevented me from field coverage. This was a motivation and reason for my strength, and I left the institution and became an independent activist. I cover events and take photographs on my own. Today I can say I am able to cover the whole field, including military areas and front lines, and I am no longer afraid.”