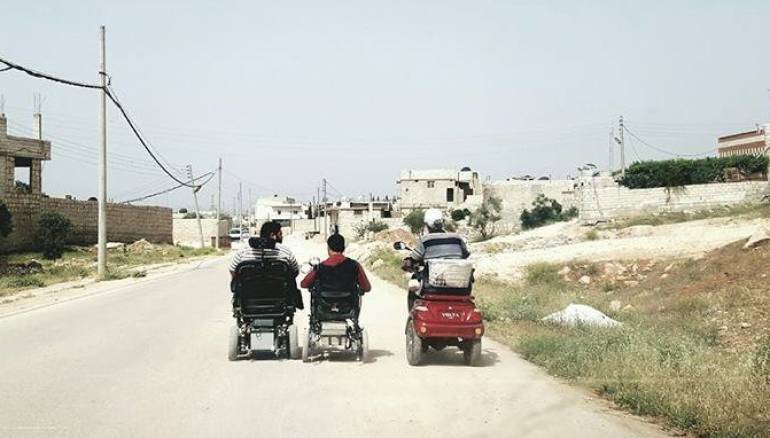 The Al Amal Institute for the Disabled has begun documenting cases of disability in the western countryside of Aleppo with the aim of developing a regional database to help assist organizations in projects for people with special needs.

The documentation, undertaken in cooperation with the Mada Center for Appeal, covered more than 20 villages in Aleppo’s western countryside. They have documented over 900 people so far with the vast majority of cases being war-related disabilities.

Speaking to Zaman al-Wasl, Hussein al-Shun, a media activist and one of the project supervisors, explained that from the cases they documented, males were aged between 18-33, adding that among the cases documented over 50 were women and 100 were children.

Syria’s war victims often suffer from marginalization, neglect and the absence of any institution responsible for following up on their health needs on an ongoing basis. Shun explained that he and his colleagues were aware of the extent of this neglect and felt the issue acutely because they themselves live with disabilities.

He said many organizations have created projects for people with disabilities in liberated areas, but they only operate for short periods of time.

“The project idea was born from our recognition of the importance of documentation and statistics for the work of any institution to organize the work, to know the needs of the injured, and the types of services they need on the material and moral level for the work to be credible and transparent for any organization that wants to provide services in an orderly manner,” he said.

Regarding the difficulties facing the project, Shun pointed out that one of the major difficulties was building trust between those with special needs and members of the Institute. “This was facilitated as all the people overseeing the project and the Institute are themselves people with special needs, and share the same aches and needs as those they are engaging with,” he said.

Shun added that there are also financial strains because the Institute is new, including the guaranteeing special transport for critical situations. “The Institute currently relies on donations from members and individual donations as it includes a donations box,” he explained.

The Al Amal Institute seeks to provide employment opportunities for the disabled, as well as secure their health, logistical and material needs, while also building and developing their abilities and talents, and help them overcome the obstacles facing them on a daily basis.