In an interview with Asharq Al-Awsat, the American diplomat says his country gave false hope early on to Syrians who believed the U.S. would intervene militarily against Assad 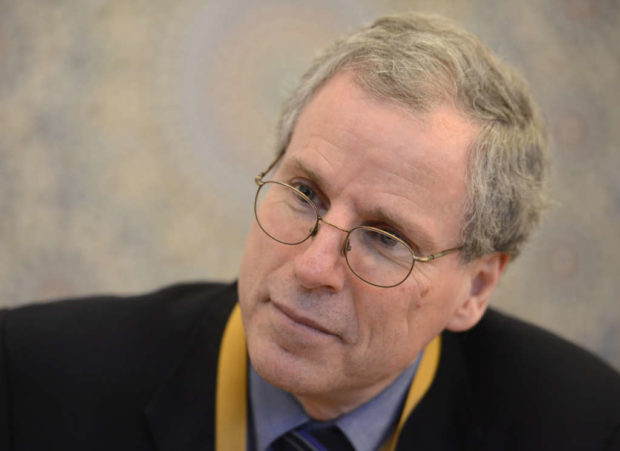 Robert Ford, U.S. ambassador to Syria from 2011 to 2014, said that his country gave the Syrian people a “false hope” when American officials offered protesters and demonstrators promises that were not later met.

In an interview with London-based Asharq Al-Awsat, Ford said he made a visit to the Syrian city of Hama in June 2011 to identify whether the Assad regime or the opposition was inciting the violence.

“We received information that Hama was besieged and that the Syrian army surrounded the city. We were worried that violence could erupt during demonstrations staged the next day. I went on a Thursday to witness which party would incite violence,” he said.

His visit also carried a message to the Syrian regime that Washington was taking the matter in Hama very seriously.

However, Ford said that at the time of his visit, his country gave “false hope” to Syrian protesters who were convinced that Washington was going to support them and intervene military, at a time when the U.S. was actually seeking a solution through negotiations.

“At the end of 2013, I thought that the war would be hard on the regime, which will be forced to negotiate a deal” to form a coalition government with opposition forces and independent figures, the ambassador said.

He added: “My biggest mistake was that I did not expect Iran and Hezbollah to send thousands of fighters in support of [head of the Syrian regime Bashar] Assad.”

Ford, who had left Damascus in 2012, also said that Russian Foreign Minister Sergey Lavrov deceived his U.S. counterpart John Kerry during the chemical deal forged at the end of 2013, and that he was treating him like a child.

Following a fatal chemical attack in 2013, Syria agreed to destroy its chemical weapons under a deal brokered by Russia and the U.S. when it joined the Organization for the Prohibition of Chemical Weapons. But, questions remained whether Damascus had then declared everything in its chemical weapon program.

Ford also said that Kurds would pay the heavy price for trusting the Americans, adding that the U.S. Army was only using Kurds to fight the Islamic State (ISIS). “Washington would not ask the U.S. Army to defend West Kurdistan as an independent district in future Syria,” Ford said.

Below are excerpts from the longer Q&A session.

Let's start with a critical point: your visit to Hama in June 2011. Why did you go? Do you think the decision was wise?

The two questions are legitimate. Why did you go? The answer is easy. We had information that Hama was besieged and the army was encircling the city and we were worried about violence in the demonstration the next day. I went Thursday because I wanted to be a witness to the violence if it takes place, and to know who started it because the question in Washington would be: Who started the violence? The demonstrators or the government? If they ask me from Washington and I say I do not know because I am in Damascus they will not accept my answer. I also thought that if I sent diplomats from the embassy it would not be as effective as if I had gone myself.

My visit also included a message to the Syrian government that we are taking the issue seriously and they should not send the army into the city. Hama has a tragic history as is known. I did not ask permission from the U.S. State Department. I just said I was going. I sent a message to (Assistant Secretary) Jeffrey Feltman Wednesday and said I was going to Hama Thursday (one day before) the demonstrations on Friday.

Was it a wise decision?

There are two aspects. Positive and negative. Positive, my visit has shown to the Syrians that we are interested in human rights issues. So far, when I meet Syrians, they tell me: I went to Hama, thank you. Also, I knew a lot about the opposition from the visit. Before that, we did not know how organized they were. They have their own security, a unified command, and an economic relief agency for families. That was not the reason we went, but I learned.

But there were two drawbacks to that. First, the Syrian government used my visit to support its propaganda that the Syrian revolution was an external conspiracy. Second — one of my students at Yale wrote a thesis about it — was my visit and other work in Syria in 2011 encouraged the protest movement to grow, but the Americans were not ready to send the army to help the Syrians. This means that we gave the Syrians false hope.

Do you know the story of Hungary in 1956? In the Cold War. (President Dwight) Eisenhower and the Soviet President (Nikita) Khrushchev. At that time, the Hungarians demonstrated in Budapest. Before that, there was American propaganda (that America would) help the people and (encouraged) demonstrations against communism in Eastern Europe, including Hungary. The West was sympathetic to them. The Hungarians rose in November 1956 during the Suez Canal crisis. Of course, the Americans did not do anything. The Hungarians were crushed by the Soviet army and there were victims, arrests and disappearances. For the Hungarians, it was a terrible experience.

Some people have heard my message, but not everyone. Which meant there was encouragement even if it was not intended.

The Q&A was translated and edited by The Syrian Observer. Responsibility for the information and views set out in this article lies entirely with the author.