Syrian soldiers appear to corroborate officer's comments that abuse is widespread and defections are common in the regime's volunteer force, All4Syria writes 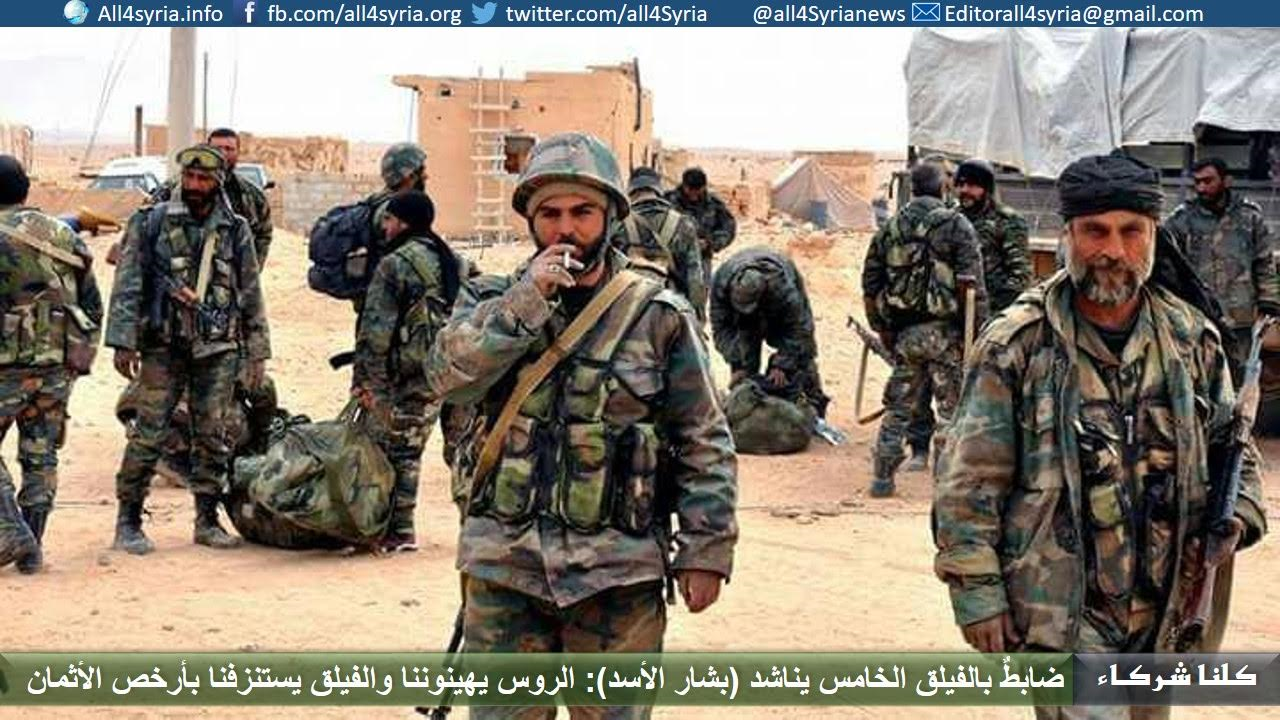 Loyalist pages quoted messages from a Syrian military officer appealing to Syrian President Bashar al-Assad, which spoke about the insults which regime soldiers are subjected to from the Russian army, also revealing the truth regarding defections within the military and the “friendly fire” which had killed its most skilled officers.

The loyalist “Masyaf al-Ghab Now” page quoted the Fifth Corps officer's message directed to Assad in which he spoke about the poor treatment which members of his outfit were subjected to by the Russian army and its officers, describing the Corps as the worst formation fighting in Syria.

The officer, who the page did not name, opened the letter saying: “The Republican Guard, despite the low salary, has had the dignity and prestige of the fighter remain intact. I want to talk about the worst fighting formation currently in Syria, and that is the Fifth Corps, because I was an officer in the Corps…. I have been fighting in it since it was formed …. starting with the battle to liberate Palmyra to Hama, Halfaya and now east Salamiyah.”

The officer revealed in his letter that horrible things and failed plans had plagued the Corps, “whether with the equipment, command, or lies … ending with death and wounded.”

The officer addressed the practices of the Russian officers and how they insulted members of the regime forces and humiliated them with the monthly salary they gave them, saying: “The Russian officer who is coming to us from Russia, if he wants to tell you, ‘Good morning,’ he would start with the sentence, ‘We’re giving you $200 or $300.’”

He added: “Yesterday in one of the meetings, the chief of staff was talking and I told him we wanted bulldozers to make sandbanks. He told me that his hand was already in his pocket and said, ‘Why should I bring you bulldozers? You’re Syrian and you should bring the bulldozers… We are paying you $300 a month.”

He also spoke about the humiliation the Fifth Corps fighters receive from the Russians, by shooting over their heads or between their feet and insulting them in a language they do not understand, according to the text of the message.

The officer said in his message: “Every military plan had to motivate people under the lie that warplanes would scorch the earth or there would be artillery and mortar cover. We didn’t see any of that. If there were mortar or tank shell strikes, it was on us and not the enemy.”

The officer addressed the failure of the Fifth Corps and its lack of sufficient equipment, saying: “Neither artillery, tanks or mortars nor even ambulances, which are the simplest possible demand we could make for the Corps operations, are there. The Corps’ equipment is a failure, there is no equipment, just automatic rifles and nothing else.”

The officer added that the “martyrs and wounded” in the Corps did not receive benefits and compensation, and added that three batches of fighters had been changed because every time a new batch of volunteers or reservists arrived, they fled from the Corps because “they brought us to die.”

The officer closed his message by describing the formation as a “farce,” asking about the point of a failing regiment bleeding regime officers at the cheapest prices, saying: “The Fifth Corps … is a corps of questions without answers … a corps of failed operations.”

A number of those who have dealt with it confirmed what the officer said in his message, including members of the Fifth Corps. One of them, commenting on the message, said: “What this officer is saying is 100 percent true. I’m a lieutenant in the Corps and have been abused a million times. They made us hate this thing called a country.

"Please, Mr. President, if you’re really listening, listen to us.”

Another view differed, saying: “As if the situation in the Syrian army is so wonderful. The worst treatment is from officers of your country, not a foreign officer.”

The Fifth Corps was formed at the start of this year and came with the backing of the regime ally Russia to limit Iran’s influence and contain it.