Police chief says move is in response to the need to care for and inspect women suspects in line with social customs, Zaman al-Wasl writes 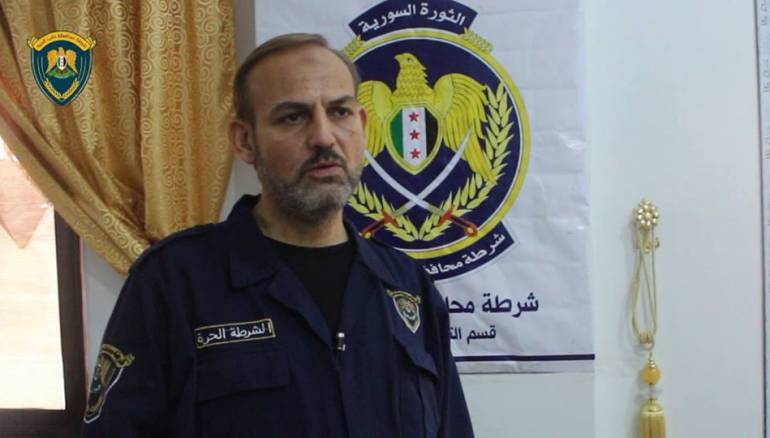 A program is underway in rebel-held areas of Aleppo province to train policewomen to deal with female residents and methods of inspection according to social customs, according to the local police chief.

Adeeb al-Shalaf told Zaman al-Wasl that the aim of this step is to have women contribute to the performance of civilian police tasks and to meet the necessities of dealing with female citizens, especially in cases when women are arrested for multiple crimes.

He added that women have legal and legitimate rights, no matter what crime they committed, and that no man should search her while she is under trial or detention. The new step is designed to prevent embarrassment and answer the demands of women's rights, while offering a livelihood for dozens of women in families that no longer have a breadwinner.

Shalaf pointed out that the Aleppo Free Police implemented the idea for this project before the provincial capital was recaptured by the regime. He said that as part of the project women police were gathered in police headquarters and in many rural centers that have detention centers, but the experiment was unsuccessful for reasons that cannot be mentioned.

"The leadership of the Free Police decided after the change of circumstances to reapply the experiment,” he said, adding that women with university degrees could be selected female police officer training to care for detainees and deal with them without embarrassment.

"The experience of introducing the female component of the Aleppo Free Police is an adventure. There are also known factions that are hard line about women working and therefore the experience was implemented quietly to prevent any sensitivities or problems," he said.

He explained that conditions of acceptance for females to the police force were previously limited to proficiency in writing and reading, but it has now become necessary to be linked with an education certificate and to enjoy the physical fitness suitable for police work.

Shalaf said it is preferable the applicant is a wife, sister or mother of a martyr, in order to be accepted in the community, and be able to take care of her children on her monthly salary, noting that "among the members of the Aleppo Free Police is now a police[wo]man who had three of her children and her husband die because of the war.”

The chief confirmed that there are more than 20 police officers in the Aleppo Free Police distributed in the western and southern districts of Dara Azza, Qasimiya, Atarib, Urm, Sheikh Ali, Abyan Semaan, adding that other towns and centers of the liberated countryside will be covered by the female officers when the circumstances are fit.