ISIS' former 'capital' will be returned to the embrace of the Syrian state following its capture by SDF and coalition forces, loyalist website Damascus Now writes 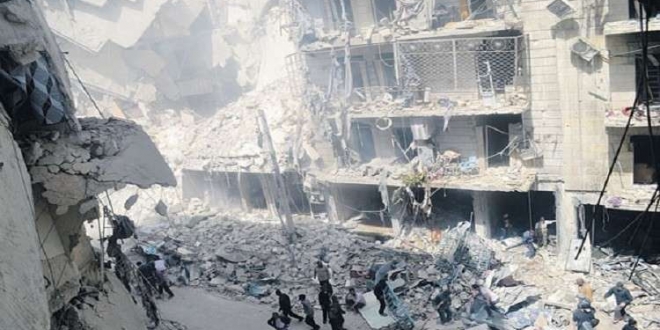 The Syrian Democratic Forces militia, backed by the U.S.-led international coalition with financial support from Saudi Arabia, declared an operation to liberate the city of Raqqa at the start of October in 2016, entering into the race with the Syrian army to impose its influence on the eastern province.

The SDF militia began its operations toward the city of Raqqa from the northern and northeastern side of the city under heavy air cover from the international coalition, which carried out dozens of massacres of civilians over the past year. The coalition’s operations room justified the strikes on civilians as individual errors, while dozens more were killed with its use of internationally banned phosphorous weapons and its heavy strikes against infrastructure. Most of the Syrian state institutions, civilian service centers and bridges connecting both sides of the Euphrates were destroyed on the pretext of fighting terrorism.

The SDF militia announced on social media the liberation of the city of Raqqa from the Islamic State (ISIS) following reports of an understanding reached between ISIS fighters and SDF militants. The agreement provided for ISIS fighters to surrender their weapons and join the SDF ranks to help fight the group and offer information about the organization and its backers. Media sources spoke of ISIS foreign fighters exiting in buses with their weapons to the Syrian-Iraqi border to be transported later to an unknown destination.

America and its ally Saudi Arabia have rushed to try to offer full support to the Kurdish forces in Raqqa, with images appearing of Saudi Gulf Affairs Minister Thamer al-Sahban alongside the international coalition coordinator and U.S. President Donald Trump’s envoy to the Middle East.

After his visit to Raqqa, Sahban published on his personal web page: “Speak with all your energy and mobilize all your projects, for silence shall soon be imposed. The fate of terrorism and its people is inevitable, and as ISIS was eliminated so will be its siblings, with God’s permission.”

Some analysts believe that the Saudi minister’s visit with prominent European personalities and his support for Kurdish forces was meant as an attack on Turkey, in response to Ankara's support for Qatar during the recent Gulf crisis, in which Ankara increased its military presence in the Turkish base in Qatar.

Politically and on the ground, according to sources speaking to Damascus Now, Raqqa and Idleb will return swiftly to the Syrian state, on its own terms, and the timeframe for its return will be a surprise factor for the enemy of the Syrian people.

Despite all the provocations from America and its allies with the promotion of their alleged victory in Raqqa, the Syrian army and its friends and the political leadership in Syria have announced that all foreign forces inside Syria without approval of the government must urgently leave after the Syrian army has retaken most international roads connecting the provinces, which will speed up reconstruction under the supervision of the Syrian state.