Schools are unable to provide proper education to students due to a dangerous learning environment and difficulty in securing textbooks, Zaman al-Wasl writes 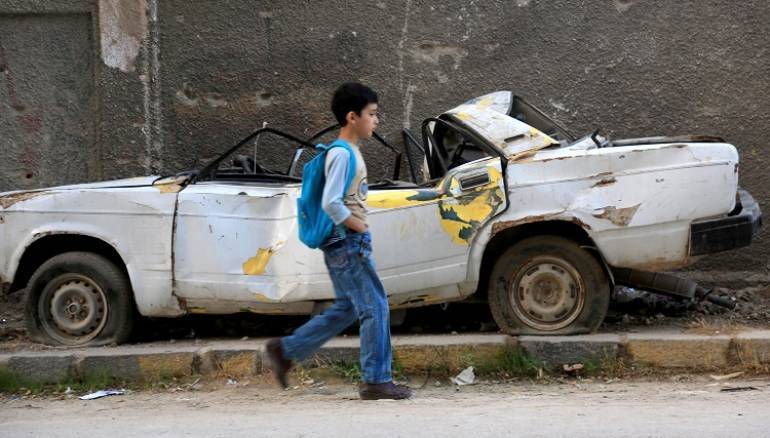 The education sector in the opposition-held Eastern Qalamoun region is facing many challenges, including a shortage of state-administered textbooks in schools.

Hazem Bakr (not his real name), a faculty member in the town of Al-Rahiba, northeast of Damascus, told Zaman al-Wasl that the state of education in the eastern cities and towns of Qalamoun is generally acceptable. But , he added, there are a number of problems related to the renovation of some educational centers for primary school groups.

According to Hazem, this has forced teaching staff to take on morning and evening shifts in order to accommodate for the large number of students this year.

He added that schools also suffer from a severe crisis in securing the textbooks, especially for primary grades, averaging one or two textbooks per class.

Hazem explained that the Assad regime has failed to provide schools with the adequate number of textbooks for this year.

In light of this, students have taken to photocopying and reproducing books within local libraries, but at their own expense. This has contributed to the burden which families face due to the sharp rise in the prices of school supplies, alongside the poverty and unemployment suffered by most.

Said al-Tawil, a father of three, said: “Like other parents, I have a very difficult time securing my children's school supplies, especially with the high prices of children's clothes, notebooks, bags and other stationery. This is quite exhausting for me and most families whose life conditions have changed.”

He told Zaman al-Wasl that the process of photocopying the books requires additional time at the expense of the students themselves, and to some extent delays their learning and impacts their education.

According to Said, the low income of school teachers has also led them to rely on money from private lessons, which exhausts the teacher and leads to a decline in their effectiveness.

The father also mentioned the problem of overcrowding in the classrooms due to the large influx of displaced persons into the region over the past years, indicating the number of students in single classrooms has reached up to 45 students in just one secondary grade.

In Al-Rahiba, Jeroud and Dumeir some schools have faced complete or partial destruction as a result of the direct targeting by regime forces in recent years. The town of Dumeir has refused to carry out any maintenance on the damaged school facilities within its area.

The teacher Hazem explained that while some of the schools have since become shelters for the displaced population, other school buildings lie within close proximity to regime forces. This has put the facilities and students at risk, resulting in many parents removing their children from schools. This has led to an increase in the number of students in the classrooms of functional schools.