Women's associations in the rebel-held province are working to build awareness of basic rights and empower local women, Zeitoun writes 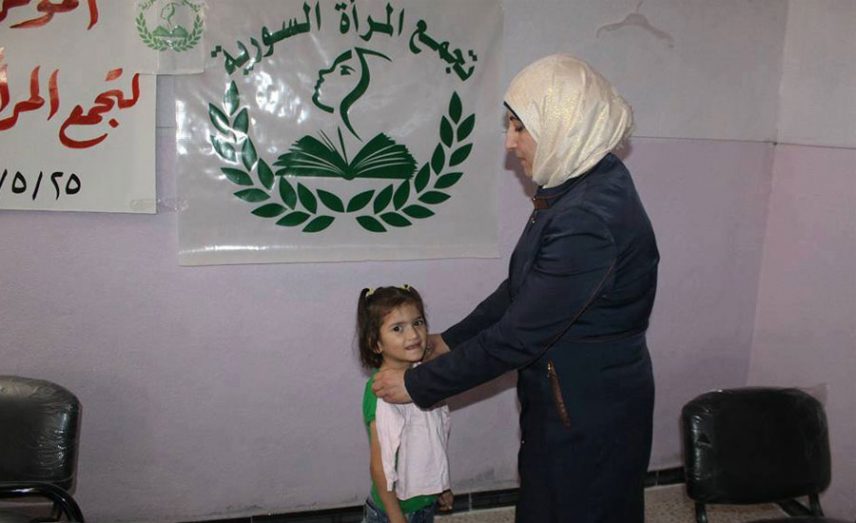 While Syrian women’s issues have received special attention since the revolution, much of the work has been limited to civil society groups, associations and locally formed women’s centers.

This interest did not emerge out of a vacuum, but is the result of violations which women have been subjected to, as well as women's changing roles in society, whereby groups have been formed to advance their situation for the better.

Among the institutions is the Syrian Women’s Association in the city of Maarat al-Nouman in Idleb province, which began its activities in the middle of this year.

The Association’s local director, Hoda Sarjawi, told Zeitoun: “The association was established in a founding conference last May 25 in the city of Maarat al-Nouman with the aim of advancing women and empowering them, increasing their awareness and encouraging their participation in institutional action.”

Sarjawi added that a number of meetings preceded the first founding conference, during which the rules of procedure for the association was developed, including the group’s structure, vision, aims and message, as well as the financial system.

“After the second conference was held, the internal system was amended, and during the meetings the administration of the group and its members were selected,” she said.

The group carried out a number of activities, most importantly the “Your Joy is Our Festival” event in which the Association distributed clothes to those in need, in addition to setting up awareness forums on the rights of women in international law, with the participation of the Lawyers Federation. The Association also held a number of meetings to discuss the situation of women in northern Syria, in which all women’s centers and associations in the liberated areas participated, according to Sarjawi, who told Zeitoun that the association has not obtained any support from any group since its founding, and depended only on the donations of its members for the activities it carried out.

Sarjawi explained that the most prominent factor in the decline of the role of Syrian women and their rights is the Syrian regime, “which has not provided space for any class to enjoy their rights and to exercise them correctly.”

She added that “women are within these classes that have been deprived and lacked decision-making positions, whether politically or institutionally, with the exception of a limited class the regime has used to display it is 'civilized' and 'secular,' while today in the liberated areas many centers have spread to build awareness and empower women.”

In the province of Idleb, women’s rights are currently subject to many violations, especially their family rights, as cases of early marriage have become more common due to the economic and security situation and displacement, which often deprives women of the chance to complete their education. Although for many families, education has become their last concern.

But the greatest issue facing family rights is the marriage of women to people whose real name is unknown, who are known only by a nickname or are documented under a false name, according to Sarjawi. She added that the association held a meeting around this issue with a number of Shariah and rights figures who confirmed that this type of marriage was invalid.

Because the regime is, in Sarjawi’s view, the main factor in the decline of women’s roles and their deprivation of their rights, the only solution to return to women what was taken from them is to bring down the regime and replace it with a new, democratic, social system that provides for all classes of people.

Mayas Mohamad al-Sayed, from Maarat al-Nouman, said that women do not have the ability to obtain all of their rights, demands and opportunities to establish themselves, in light of the current circumstances, and that their role has been severely marginalized and limited to the scope of the home and family. She added that the solution lay in providing a safe environment for women in which they can practice their rights and establish active women’s associations which can study women’s issues and try to find solutions for them, in addition to carrying out educational and professional projects for women and providing an opportunity for those deprived of an education to continue.

Reem al-Nahas, another woman from Maraat al-Nouman, told Zeitoun: “The women’s associations strengthen the role of women in a positive way by providing opportunities and confidence to express their opinions, ideas and demands, and to deliver their voices. These centers are limited, but in light of the current circumstances they meet the purposes to some extent.” She said that she hoped for more associations to be established in different areas without being limited to a specific place or region, so that all women in the province can benefit from what these associations offer.