Deputy foreign minister says advances by the Syrian army against the Nusra Front have been conducted with 'humanitarian considerations,' loyalist Al-Watan reports 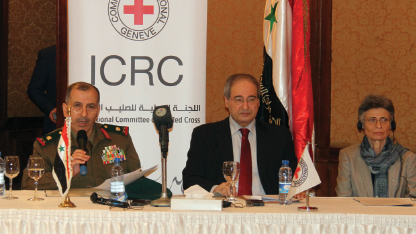 The Syrian army continued to advance at the expense of the Nusra Front in the countrysides of Hama, Damascus and Idleb, while protests broke out against the terrorist group in the Eastern Ghouta of Damascus.

The army’s military advance was not devoid of humanitarian considerations, which was confirmed by the Deputy Foreign Minister Faisal Mekdad.

According to the SANA news agency, on the sidelines of a training workshop for army officers and armed forces in international humanitarian law Monday in the Damascus Sheraton Hotel, Mekdad told reporters: “We in Syria are applying international humanitarian law on the ground while the so-called international coalition, which claims with blatant falsehood to respect this law, is sending us killing, destruction and warplanes, which assail civilians and kill women and children and everything that lives, and destroy cities, as has occurred in Raqqa.”

In the field, a media source told Al-Watan that the joint forces of the army and allied forces have continued their military operations against the Nusra Front in the northern Hama and southern Idelb countryside amid a swift collapse of the terrorist groups, which sustained painful blows from Syrian and Russian warplanes which targeted them since dawn.

With the losses it sustained, Nusra moved to release its Saudi former Shariah judge Sami al-Aridi in an attempt to reshuffle its papers after his arrest created a split between Nusra and the Al-Qaeda terrorist group. However, opposition sources close to the Jaish al-Ahrar militia and the Nour al-Din al-Zenki Movement, the two most important former allies of Nusra before their defection from the Hay’at Tahrir al-Sham alliance, told Al-Watan that there was no hope for Nusra to remain in the Abu al-Duhur air base with the Syrian army penetrating the administrative borders of Idleb.

The sources said that Jaish al-Ahrar and Zenki were not actively supporting Nusra because they had experienced major divisions within their groups, in addition to logistical issues such as the blocking of support and funding lines. They said that rumors about establishing a joint “operations room” with Nusra were only inaccurate media leaks.

The sources believed that the army’s real military operation has not yet begun as it has not fully devoted itself to the operation, but reinforcements had arrived from Deir-ez-Zor and Al-Mayadeen and would accelerate the battle being determined in its favor, especially since it has become able to deal with the American-made TOW anti-armor missiles, of which Nusra possesses a large supply.

In the southwestern Damascus countryside, sources told Al-Watan that the army was pursuing military operations in the town of Beit Jin and its environs, and that its artillery had “targeted militants’ positions and points” in the town.

On a parallel line, the SANA agency reported that a unit of the army had carried out precision artillery strikes on a group of 17 terrorists near the village of Maghar al-Mir, killing and wounding all of them.

Meanwhile, calm prevailed on the front east of the capital, with the Eastern Ghouta district witnessing clashes between the Al-Rahman Legion group and Liwa Abu Moussa al-Ashari, which defected from it more than a year ago. Protests also erupted in the town of Hamouria, demanding for Nusra to leave the town and an end to the ongoing clashes.