Thanks to the proliferation of weapons, many innocent bystanders are being killed or wounded by random gunfire, according to Enab Baladi 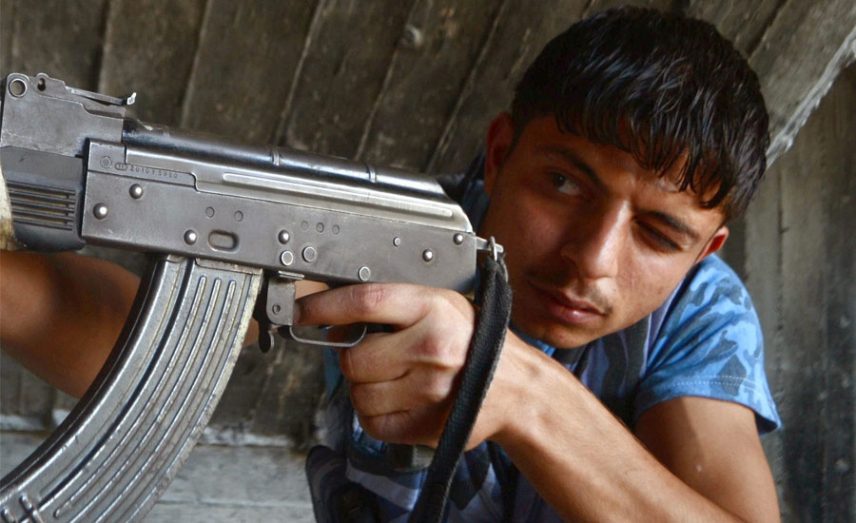 The features of civilian and military have been mixed in Syrian society, with the situation reflected in a state of constant mobilization among many citizens, who have moved to acquire light and medium weapons for their homes within the current political and security context, justifying the phenomenon with the need to defend themselves in light of the security breakdown the country has seen for years.

However, this phenomenon has sparked controversy after the goal exceed the need for self-defense, and transformed into a tool for shooting displays in civilian areas during weddings, public celebrations and funerals for the dead, and weapons have begun to easily reach the hands of people who are not qualified to use them, resulting in more victims and tragedies, which Syrians are not short on.

In Syria, the custom is practiced of firing into the air at happy occasions as an expression of joy and in an attempt to give value to an event that might pass normally, reserving no bullet that might be spent in the name of the one the occasion is for.

In areas under regime control there are more reasons to celebrate from the perspective of loyalists and National Defense Forces and other allied militias, and as they have increased so have the incidents of random deaths of civilians.

Some cases of the misuse of weapons are related to political and military events, mourning the dead of battles, the treatment of wounded people and disputes between loyalist militia members.

In the city of Lattakia, in which weapons are widespread among civilians, an incident of indiscriminate shooting by a member of the Saqour al-Sahara militia resulted in the death of an entire family of five last April, which created a large amount of popular anger, which was extinguished by promises from the province's officials to “hold criminals to account.”

An incident in which a 16-year-old boy was killed last July sparked a “card game” which shook Damascus after it became clear that the criminal was the son of an official and that he fled the country, as well as the fact that the case was put in judicial records afterward without anyone being held to account.

In the city of Salamiyah in the Hama countryside, an 18-year-old girl was killed as a result of shooting during a party after the matches between the Syrian and Australian national football teams in October.

During the New Years parties, three people were killed and about 50 others wounded in various parts of Syria as a result of indiscriminate celebratory firing. Recently, loyalist pages mourned a young man named Ahmed Talal Faris, an inventor and mechanical engineering student who was wounded with a stray bullet near the Abassin Square in Damascus.

Fighters and civilians “play” with weapons

Arms dealers are active in opposition-held areas, which to a large extent makes it easy for fighters and civilians to come into possession of them without needing to obtain a license and without any monitoring agency in power, in addition to the security tension which pushes civilians to own weapons for self-defense.

The major spread of weapons has had negative effects for civilians in more and more cases, especially in internal fighting between militant groups, or at funerals, in addition to weddings and social events. A Civil Defense official in Idleb city, Yahya Arja, told Enab Baladi that between five and 10 victims of random shooting are found per month, including the wounded and dead.

Inside the Euphrates Shield operation area north of Aleppo, the indiscriminate use of weapons at popular occasions resulted in 34 injuries, including weddings and other celebrations, according to Gen. Abdel Rizak Aslan, general commander of the security and police forces.

Aslan told Enab Baladi that the northern Aleppo countryside area had seen dozens of injuries resulting from gunfire tied to personal disputes in which weapons were used, which led to civilians who had nothing to do with the incident being injured.

In Daraa, in the south, Enab Baladi’s correspondent observed a number of incidents of victims from the indiscriminate use of weapons, some of them connected with disputes between rebels and others as a result of funerals and celebrations. Over the last week, a child was killed in the city of Al-Danamein as a result of disputes between fighters, while a similar event resulted in a man’s death in the town of Kafr Shams. The number of victims of celebrations has increased clearly, especially in the displaced camps near the city of Dael, where bullets can easily pierce tent fabric and claim innocent victims.

Authorities struggle to control the use of arms

Since 2012, Syria has been a huge battlefield with “safe” areas seemingly non-existent, which has made the spread of arms among civilians difficult to regulate in light of the presence of hundreds of rebel groups and militias fighting on the ground and bringing weapons into their areas.

Despite that, police, judicial and security authorities in opposition areas have made strenuous moves to control the indiscriminate use of weapons, whether through local decrees to which fighters and civilians submit, or through judicial mobilization or awareness campaigns.

In areas under regime control, attempts have been modest and limited to calming citizens through decrees to remove the security badges of some National Defense Forces members and banning them from possessing weapons or using them without regulation, or raising the qualifications for licensing slightly.

Who will remove weapons from hands of civilians and militants after the war ends?

The problem of weapons chaos puts question marks around the future awaiting the armed Syrian society, in which the most important question is: How will disarmament occur and who will regulate the licenses?

Commenting on this, Syrian lawyer Bassam al-Ahmed, director of the Syrians for Truth and Justice organization, said that the issue would be regulated internationally according to United Nations peacekeeping operations through a program known as DDR which means disarmament, demobilization and reintegration.

Ahmed told Enab Baladi that the aim of the program was to restore the monopoly of the state and its institutions on weapons, including stability and security in the community, and create an atmosphere of trust among citizens. According to the DDR program, ammunition, explosives, and light and heavy weapons are collected from fighters, and in many cases from civilian residents, and documents are identified and then disposed of.

Ahmed said that those steps should be completed in a legal framework which everyone without exception is obligated to adhere to and work to regulate the disarmament process from the ground up.