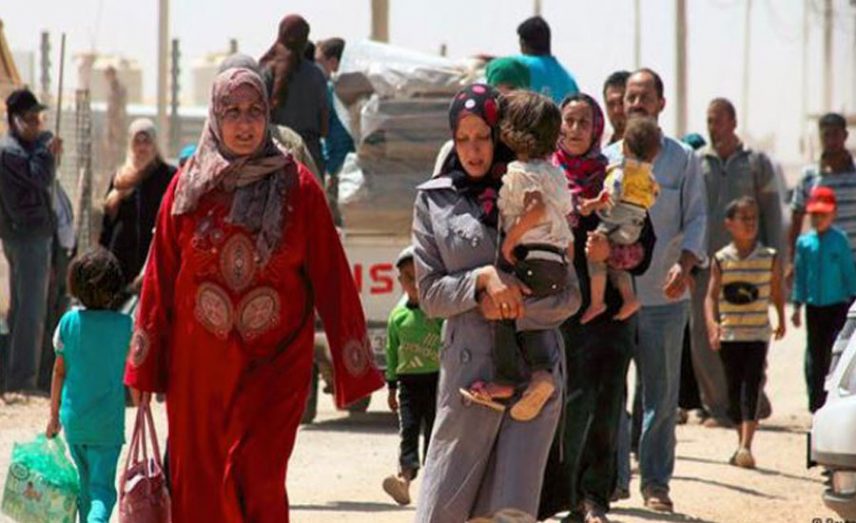 The Syrian revolution has entered its eighth year and the tragedy of the Syrian people continues.

Syrians have suffered for seven years from the scourge of bombardment, battles and campaigns of arrest. Hundreds of thousands have been killed and imprisoned, while millions have been forced to flee inside Syria, or to take refuge in neighboring countries or the remaining countries of the world, in particular in Europe. This is in addition to the campaigns of forcible displacement which the regime has carried out against thousands of civilians.

After seven years of revolution, Syrians are asking: What has happened to the 23 million Syrians the country had before the revolution erupted, and how many have been killed, arrested, displaced, gone abroad, or forced to flee throughout the years of the revolution?

Last year, the Assad regime ignored all the instances of killing, arrest and displacement which it had committed against its people over the years of the revolution and issued statistics for Syria’s population.

According to the head of the regime government's Syrian Commission for Family Affairs, Mohamad al-Qish, Syria’s population was 28 million in 2017, with 21 million living inside Syria, while the number of refugees outside was 7 million. The head of the commission said that the number of displaced in shelters was 2.7 million.

Among the 8 million displaced, there are hundreds of thousands who have been forcibly displaced by the regime to opposition areas. Idleb province shelters, according to U.N. Office for the Coordination of Humanitarian Affairs statistics, about 2.5 million people, including 1.1 million who fled various parts of Syria.

Within the first months of the start of the Syrian revolution, millions of Syrians fled to neighboring countries, specifically Turkey, Jordan and Lebanon.

Turkey was the top destination for Syrians, with the Turkish Interior Ministry and the Migration Department under its authority saying in their latest statistics that the number of Syrian refugees in Turkish territory has reached 3,424,000.

Lebanon was the second destination, with the U.N. High Commissioner for Refugees confirming the presence of about 998,000 refugees registered with it, while official reports say there are another 300,000 unregistered refugees.

Residents of the southern areas have fled toward Jordan, where the U.N. says there are 1.3 million refugees, including 660,000 refugees registered with the UNHCR, some of whom live in the Zaatari and Al-Azraq camps, while the rest are spread throughout the cities of Amman, Erbid and other areas.

Arab countries have been the destination for many Syrians, with Egypt witnessing a major presence. Tareq al-Qoni, Egypt’s deputy foreign minister for Arab affairs, said that the number of Syrian refugees in Egypt was about 500,000, including about 120,000 registered with the UNHCR.

Sudan was a favorite destination for Syrians, with the number of refugees on Sudanese territory at about 250,000, most of them living in the capital Khartoum, according to the Committee for the Support of Syrian Families in Sudan.

In Europe, the destination that was the main aim of thousands of Syrian refugees, the United Nations has said there are about 885,000 Syrians who have fled there between April 2011 and the end of 2016, about a third of them to Germany and Sweden. The United Nations also said about 700,000 refugees arrived to Europe last year, a large number of them Syrian.

The British Foreign Ministry said that it has received 10,500 Syrians within its resettlement program over the years of the war.

In Canada, the number of Syrian refugees is estimated at 40,000, according to statistics issued last May. There are 20,000 refugees in Australia, and 16,000 in the United States, while Syrians have also fled to Malaysia, but without precise statistics of their numbers.

The regime’s monstrous mechanism of repression has led to the deaths of hundreds of thousands of civilians. The Syrian Network for Human Rights has documented the deaths of 217,764 civilians from May 2011 to March 2018, 93 percent of them killed by regime forces and Russia.

There are also thousands of Syrians in prison. The Network’s report said that there were 104,029 people who were still subject to arbitrary detention or forcible disappearance in official or unofficial detention centers under regime authority, in addition to 2,419 prisoners held by the Kurdish People’s Protection Units.