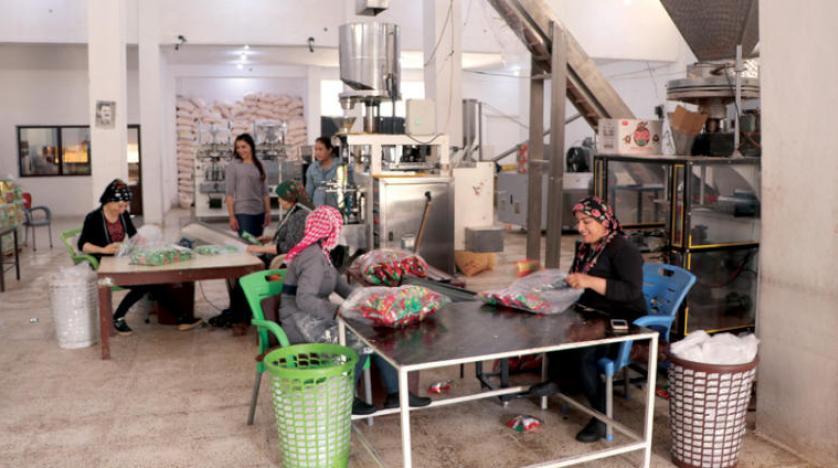 The war in Syria has not stopped a group of women civil society activists in the northeastern Malikiya city from establishing their own independent projects. Staffed by amateur women, these projects are aimed at introducing them to the labor market where they can compete with men.

Star Conference economic committee spokeswoman and activist Mayasa Mahmoud told Asharq Al-Awsat that the idea of forming a “female market” stemmed from the fact that several women used to sell their homemade products on sidewalks.

Initially, the idea was to establish a popular market for women to sell their crafts, but it then evolved into a market with actual brick-and-mortar stores, she explained.

Twenty-one stores were set up, each between the size of 25 and 35 meters. The whole market now appears more like a department store.

Dubbed “Al-Boubla” or butterfly, the market was opened in early May. It is located in the central Malikiya city and includes clothes, shoes, garment and food shops.

What sets this market apart is that it is run completely by women.

Mahmoud said that the market is not strictly aimed at making financial gain and allowing women into the workforce, “but it seeks to restore social ties between women and girls, given the gap that emerged between them during the war.”

The market allows them to develop their expertise and grow more confident in themselves, she stressed.

The Star Conference’s economic committee is one of the most important female unions in the autonomous north Syria region.

In spring 2016, it launched eight agricultural projects that are operated by women. It also opened two bakeries and a potato chip factory.

Mahmoud said that the profits from these projects are invested in supporting and launching others.

“We want to establish an economic infrastructure dedicated to working women,” she stressed.

The 1,500-meter property where the Al-Boubla market was built was granted to the female activists for free by the Malikiya municipality, revealed market director Nijme Suleiman. The Star Conference covered construction and equipment expenses.

Suleiman told Asharq al-Awsat that women were given the stores free of charge.

“Originally, they were contracted to work at the shop for a one-year period. After consulting with them, however, the period was extended to two years to allow them to rely on themselves, develop their expertise and be able to compete in the job market,” she revealed.

Store manager Falak Ibo, 42, expressed to Asharq al-Awsat her happiness at being able to launch a small project that helps her cover her living expenses.

“This is my first experience at a job and it has frankly helped me raise my self-confidence. This is an opportunity for women to prove that they can run a commercial project,” she stated.

The Jarjila restaurant is one of the projects that can credit is success to its female staff.

Manager Dalia al-Hajj Shibli told Asharq al-Awsat that the idea of the restaurant evolved from the desire of a group of experienced female cooks to open their own restaurant.

After much discussions, they agreed to fund the project with the small capital of 6 million Syrian pounds ($4,500). The restaurant was staffed by six chefs, an accountant and general manager.

The restaurant’s profits now cover all salaries, bills and the rent, Shibli said of its success.

Jarjila was opened in early 2016 and operates 12 hours a day. Its most popular dishes are the Tripolitan kibbeh, Saudi kabsa and Yemeni mendi.

Samar Abdo, 25, who was busy preparing kibbeh, said that this was her first ever job, but she has 10 years of cooking experience, which she acquired from her mother.

Despite the long hours at the restaurant, she is encouraged to continue working by her husband and the rest of her family. Her eldest daughter helps her in house chores and her husband gives her moral support.

Abdo said that she was initially intimidated by the prospect of working given the conservative society in Malikiya.

“But once I started to work, I was overcome by a beautiful feeling. It was the first time that I had a sense of independence and that I had the ability to produce something,” she stated.

“I honestly did not care about what my neighbors or what society was going to say about me,” she told Asharq al-Awsat.

Other women around the city have set up sewing workshops, bakeries and pastry shops.