Divisions between Sunnis and Shias have plagued the areas in recent years, but effort to bring communities together have begun reports Al-Modon 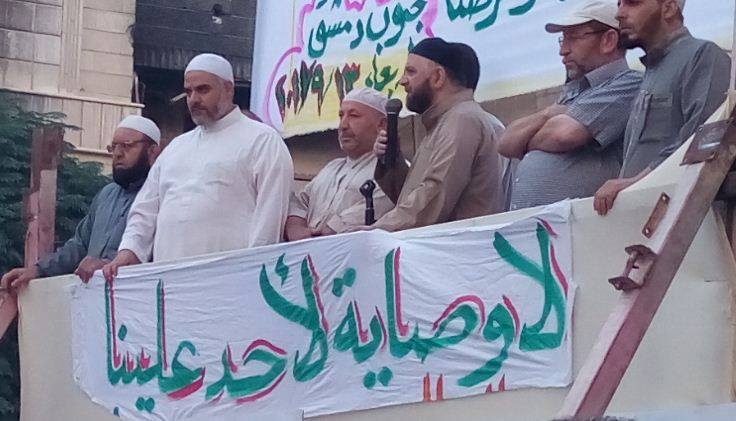 The southern Damascus towns of Yelda, Babila and Beit Sahem, have witnessed divisions within the “reconciliation committees” and among the people since the regime took control of the region days after the departure to northern Syria of the last convoy of opposition fighters and civilians who did not want to accept the government terms.

The division between the committee’s most prominent notables and popular actors, was caused by the deployment of Russians in the vicinity of the three towns at points of contact between Shia militias in Sayeda Zeinab and its environs. Sheikhs Anas al-Taweel and Salah al-Khateeb, who are part of the reconciliation committee are trying to keep the Russians away from the area and bring the Iranian in, by saying that the Syrian state has been the only guarantor for the reconciliation of Babila, Yelda and Beit Sahem since 2014.

Taweel, a Sunni sheikh, entered the area for the first time on May 11 after armed groups exiled him to Damascus and his armed cells were arrested. A Shia cleric from Sayeda Zeinab entered with him and gave a sermon to the civilian population about “Shia-Sunni unity” and the need to end the division that has occurred in recent years.

The movement led by Taweel is trying to form armed cells to take the place of the Russian military police with indirect support from the Patrols Branch of Military Security, amid still unannounced demands that the Russians leave the area. Taweel is considered to be close to the Patrols Branch head, the official sponsor of the implementation of the Four Towns Agreement in southern Damascus.

Shia militias had been preparing Taweel for about a month to play this role, in order to overturn the reconciliation agreement between the opposition and the Russians which stipulates the deployment of Russian military police and the prohibition of Shia militias entering the area. Meetings have been carried out between Taweel and his group with Shia religious and military figures in Damascus in which they have discussed the need to “end sectarian strife” which has been sown by the “militants” in recent years and to go back to the way the area had been, with “Shia living alongside Sunnis” and open roads between the three towns and Sayeda Zeinab without any impediments.

So far, the Shia population of southern Damascus had not lined up with Taweel and Khateeb, as residents do not want the Russians to leave the area and for relations between the three towns and Sayeda Zeinab to return to how they were. This is out of a fear of the new Shia expansion in the area and that Shia militias might carry out revenge attacks, according to what one of the area’s notables told Al-Modon.

The exit of the rebel groups from southern Damascus, the regime taking control of the three towns, and talk of Sunni-Shia reconciliation all come at the same time as talk of Shia militias greatly expanding the Sayeda Zeinab shrine area and building areas for pilgrims whose numbers should increase in the future as a result of the end of military operations in the Damascus area and the area being fully secured.

The Shia militias are trying to expand the area under their control to include the three towns,in which Shia own houses and buildings for pilgrims. Their aim is to open the Babila-Sayeda Zeinab road to militia and pilgrim traffic, in addition to an attempt to gradually make the area more Shia, by using religious and military concentration points as a base, similar to what is occurring in the Deir Ezzor and the Aleppo countryside.

A source close to the Russians said in an unofficial statement to Al-Modon that the Russians have been aware of what the Iranians were doing and what Iran is trying to do in the area south of Damascus for a long time, which is to build a suburb on the model of Beirut’s southern suburbs. The Russian source said that this would not happen, even if relations are restored between the three towns and Sayeda Zeinab, as the Russians will still be a “stick in the wheels”, as he put it, for any military expansion of Shia militias in the area.

The source said that the departure of Russian military police would be tied to the desire of the people and civilian actors. The Russians have no problem leaving the points of contact with Shia militias, after being assured that incidents of “treachery” would not be repeated. One of these incidents occurred few days ago, when Sayeda Zeinab militias sniped a young man and targeted Beit Sahem with mortars, while buses of displaced were leaving for northern Syria.