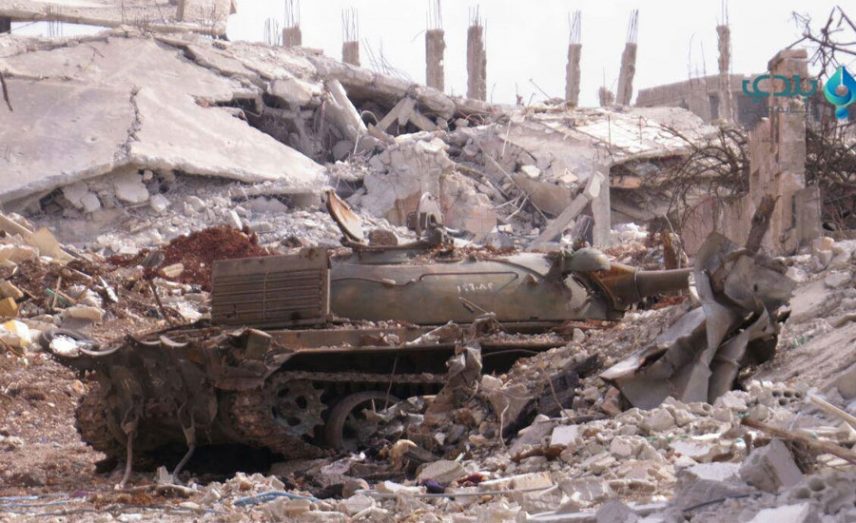 Daraa province, where the spark of the Syrian revolution was launched, is awaiting an unclear fate. The regime recommended the signing of reconciliation agreements in various cities and town in the province, coinciding with Russian threats that the area will meet the same fate as eastern Ghouta if they do not agree to these reconciliations.

It is difficult to separate the events happening in southern Syria from the strategies of the parties that operate, directly or indirectly, in the area, and who are trying to form a path that follows their agendas for the future.

The regime and its allies, Jordan and Israel, are considered the main parties intervening in the area. The regime’s presence is manifested by its control over some cities and towns and concentrating its forces in some military sectors as well as through some agents and reconciliation committees in liberated areas. Jordan’s intervention is manifested in the presence of some rebel groups that are part of the MOC (Military Operations Command) operations room, as well as some NGOs, while Israel has worked to build relations with some groups concentrated near the occupied Golan Heights by giving medical support and aid in addition to monitoring and surveying the area and sometimes intervening militarily.

The instruments of these parties are still ineffective compared to the stated objectives. The regime still depends on spreading rumors about its intention to invade liberated areas once the de-escalation deal has ended, and offering residents a choice between a military solution or reconciliation. However none of these rumors have been implemented because, it seems, it does not control decision-making in the southern area due to the specificity of the region’s political/geographical position, and because any military action would mean a war of attrition, and bringing chaos to Jordan and Israel’s borders.

The rumors have been spread along the ranks of rebel groups, forcing them to choose reconciliations through agents of the regime, loyal militias or sleeper cells from time to time. The most recent of these was a Hezbollah cell in the city of Jassim in northern Daraa, which was said to be preparing to strike Israel and Jordan with rockets in accordance with the threat made by the regime to disrupt the area’s security and sow chaos and upset public opinion.

Abu Bakr al-Hassan, the official spokesman for the Free Syrian Army’s Jaish al-Thawra (Revolution Army) said that the regime depends on loyal followers in liberated areas to spread the idea of reconciliations, which have been rejected by revolutionary institutions. This has led to a failure of what he described as “sinister plots”, adding that current information indicates the region will remain one of the most important strongholds of the revolution with factors that make it steadfast, such as the borders it shares with neighboring countries, as well as helpful logistical equipment such as dozens of equipped hospitals.

With its threats, Russia is meanwhile resorting to psychological warfare to impact local public opinion in Daraa, saying that it is able to destroy the Houran area as it did eastern Ghouta because of the presence of a number of influential groups in the area, in addition to the borders which Houran shares with Jordan. As Hassan sees it, Russia “will not change anything on the ground after it tested the stability of the Houran rebels in the ‘Death rather than humiliation’ battle in the al-Menshiya district in Daraa and did not advance a single meter.” He predicted that neighboring countries would have a role in curbing Russian intervention, with the issue being the “balance of interests in the region.”

The opposition in the south is subject to the instructions of the United States, which protects Israeli interests and represents a line of defence for it, despite stopping support for MOC. According to FSA commander Abu al-Abbas, who said that America and Israel would not allow the map of Syria in general, and the south in particular, to be drawn unless they agree to it, while Jordan is in line with the policy of these two countries.

According to Ibrahim al-Ghourani, a commander in the Al-Haqq Division of the FSA, Jordan is trying to reach a political settlement that satisfies all Syrians and includes the return of refugees and displaced people to their homes, while Israel’s main concern is keeping the border of the occupied Golan Heights free from the presence of Iranian militias and Hezbollah.

The American role in the region appears to be subject to revisions and reorganizations, despite the fact that “the United States is the Syrian opposition’s guarantor in the south, monitoring the course of events closely, without mobilizing but rather asking rebel groups to control themselves and adhere to the de-escalation agreement and to respond to violations only,” according to Ghourani. He added that their aim is to finish off ISIS, which is represented by the Jaish Khalid bin Walid group in the Yarmouk basin area, despite the US stopping support for the Southern Front about five months ago, which led to a decline of trust of the United States.

However, it is not clear to what extent America believes in maintaining the de-escalation agreement. The border with Jordan, the occupied Golan Heights and trying to keep the situation calm are its main concern, as Mohamed Adnan, a media figure in the Jaish al-Ashair (Army of the Tribes), explains.

It appears that all sides are trying to weaken the southern area by prolonging the conflict between the FSA and the regime on one hand, and the FSA and Jaish Khalid on the other, without enabling any resolution at this point in time. After the rebel groups took control of large areas in Daraa and Quneitra, a semi-calm has prevailed in the area for the past two years, permeated at times by local flare-ups. But the future is still unclear.