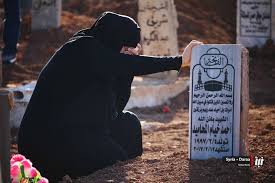 The policy of forcibly disappearing prisoners and secretly executing them without trial is no longer limited to the Syrian regime, but now extends to opposition military groups in Daraa province, most of whom are adopting the same style. The sheer number of groups in the area with varying authorities and orientations combined with the absence of the rule of law means that there has been a complete inability to control this sort of crime.

Finding corpses thrown on the roads in Daraa province has become an often-repeated scene, and these incidents are not limited to one or two. There have been cases where there will be up to six bodies from a single mass execution. This suggests that the executions are being carried out in a systematic fashion. This approach became evident when a Civil Defense team on May 28, 2018, found six unidentified corpses in a field on the outskirts of the town of Saida in the eastern Daraa countryside after they were collectively executed. Just a day before that, two corpses were found in a similar fashion — both in areas under the control of Syrian opposition groups.

Mustafa al-Mohameid, director of the Civil Defense in Daraa, said that this type of incident was part of the general collapse in security that Daraa province has been enduring and which has been ongoing for more than a year. This has not been limited only to dumping corpses, but: “Assassinations, kidnappings and theft have also spread widely in some parts of Daraa.” Mohameid said that some of the roads were a nightmare for residents because of the high frequency of killings and kidnappings, and “most of the victims are innocent passers-by.”

Omar al-Hariri, a member of the “Martyrs Documentation Office in Daraa” told Daraj that the absence of the rule of law and principle of accountability opens the door for opposition groups to carry out this type of crime.

Hariri added: “From the start of the year to the end of May, there have been 41 field executions, all of them occurring in areas under rebel control.” He said that these operations were carried out using similar methods, such as performing executions at night and then dumping the corpses on the side of the roads, for them to be discovered by civilians in the morning, before being transported to a field hospital to be identified and later buried.

Hariri said that some of the arrests were carried out openly by well-known groups who conduct raids. He said: “Executions were performed without trial and a lack of accountability for the perpetrators, who are known, encourages them to carry out more crimes.”

The opposition Court of Justice in Daraa province has evaded the responsibility of ensuring security in areas under the control of these groups, saying that their role is limited to the courts. A source in the court, who asked not to be named, told Daraj that if investigations implicated one of the opposition groups, the court was unable to hold them to account. He said that “the court does not have any executive agency to arrest those involved. The decisions are taken first by the faction and then by the court.” This complicates the task of implementing any arrest in this type of incident, which the source said did not occur randomly, as “field executions are decided directly by the faction’s leadership, and to arrest those involved would mean the arrest of the faction’s leadership and this is currently bigger than the court.”

“Field trials” are considered one of the reasons for the outbreak of the Syrian revolution after they were used systematically by both Hafez and Bashar al-Assad. This policy has now been transferred to the rebel groups who arose from the revolution, and shows that in one way or another the concept of the rule of law is still a distant idea in Syria.