The constitutional committee is not the victory that the Syrian opposition was looking for, but it may be the only option now writes Al-Modon. 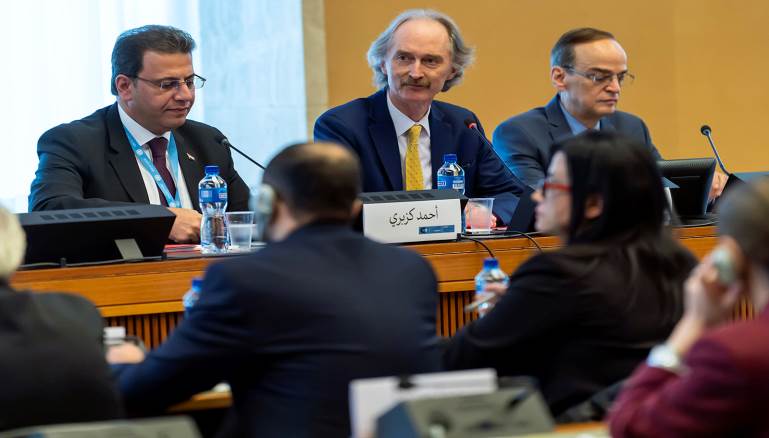 Syrians, loyalists and opposition alike, looked critically at the latest international measure represented by the start of the first session of the committee tasked with preparing a new Syrian constitution or amending one of the old constitution. With the end of the first sessions, it became incumbent on the elites of each group to inform its public of what happened, and what the situation would lead to if proceedings move seriously towards the success of this committee’s work in achieving a new Syrian constitution, bringing together the audiences of these three groups—which together constitute the community of the Syrian people in its full religious, sectarian, ethnic, intellectual and ideological spectrum.

Faced with this scene, the Syrian people, aspiring for salvation from this continuous game of blood and destruction, weighed the constitutional committee, each according to its own whims and terms of reference. The dilemma from which the committee itself suffers is that it carries the weight of finding a solution to the entire Syrian dilemma through this gate.

Since the fall of Qusair in late 2013 and the expansion of the Islamic State (ISIS) and the al-Nusra Front in liberated areas, the opposition’s military and political defeats escalated until 2015, which saw the most important factors in resolving the subsequent battles in favor of the regime: The Russian intervention, which tipped the scales, whether in terms of the difference in power or in terms of the “friends of the Syrian people” stopping their support in the face of the ferocious Russian attack, which it later became clear satisfied regional and international actors.

Faced with all that, forces of the opposition and the revolution found in the constitution an opportunity to catch their breath and to try to embarrass the regime in the matter of the constitutional committee, rather than other issues.

With regards to the “counter-terrorism” basket, “the revolutionary and opposition forces failed to deter the spread of terrorism, which was planted into the revolutionary ranks by terrorist leaders following the release of prisoners in Saydnaya and Abu Ghraib in Iraq. In exchange, Russia helped the regime head look like a major international partner in the fight against terrorism.”

With regards to the “elections” basket, the regime was able—through its proxies and fifth columns within revolutionary and opposition forces—to establish a real deficiency in the system governing revolution institutions and to make it look like a puppet being maneuvered by countries and entities in a humiliating manner that did not befit Syria and its people. Here the regime wanted to show that revolutionary and opposition forces had failed to administer even small parts of Syria—so how could they be given administration over all Syria?

Regarding the return of the displaced, the regime’s transformation of Syria into a failed state was frightening for many loyalist and opposition segments. Here a crisis emerged of Syrian citizens’ confidence in the possibility of voluntary return.

In light of the successive military defeats, given the continued Russian support for the regime, the opposition and revolutionary forces found no other way of embarrassing the regime other than the constitution. Through the constitutional process, these forces could establish work in accordance with the committee’s requirements in isolation from the outcomes of the fighting and military operations on the ground in Syria. They could also obtain recognition from the regime itself in terms of the presence of partners in the country at least. It had also become established in UN circles. This regime had not recognized from the first day of the revolution until the first day of the committee’s work that it had any partner or competitor in the country.

The solution from the Syrian point of view

Given the deliberate marginalization of the Syrian issue and it being kept out of the priorities of the states active in the region, it has become necessary for all Syrians to cling to the straw known as the constitutional committee. This committee may not be a great victory that meets the aspirations of the rebellious Syrian people, even at a minimum, and it will not compensate the Syrian people for the sacrifices of those who fell and the losses of the Syrian state resulting from this tragedy. But the fact is that in the most important stages of strength in our revolution we were unable to bring the regime to the table for negotiations, despite controlling more than 70 percent of Syrian territory. We were unable to compel them to acquiesce to these areas falling out of their control.

The international community played a negative role in terms of not recognizing the legitimacy of revolutionary and opposition institutions to administer liberated areas, in terms of issuing passports, certifying diplomas for students, and even marriage contracts and personal status papers, as well as not granting revolutionary and opposition forces the right to occupy Syria’s seat in the Arab League or United Nations.

This is the first time the regime has been forced to sit and think, with caution and fear, about signing an item that will become sacred and effective in Syria’s future constitution. All Syrians should know that no one has custody over the next constitution—neither the regime nor the opposition.

Firas al-Khalidi is a member of the opposition list in the Constitutional Committee for the Cairo Platform. This article was written specifically for Al-Modon.