The book is a rather racy choice for the government-sanctioned Arabic language department. The story follows two dispirited Damascene women, one upper-class and the other impoverished, as they find solace in their dreams, infused with lesbian eroticism and the scent of cinnamon. 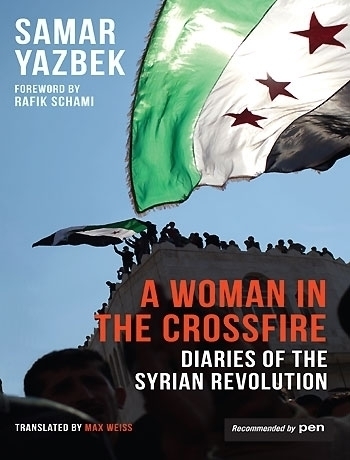 In a steamy University of Damascus classroom, Arabic language students attempt to translate Samar Yazbek’s novel Cinnamon. Heads are buried inside dictionaries: Ta-ra-ha-la, to be flaccid. Giggles erupt across the room as sentences are decrypted.

The book is a rather racy choice for the government-sanctioned Arabic language department. The story follows two dispirited Damascene women, one upper-class and the other impoverished, as they find solace in their dreams, infused with lesbian eroticism and the scent of cinnamon.

The author, Samar Yazbek, is one of Syria’s bright, reasonably young, literary talents. Aged forty-two, she is as old as the Al-Assad regime; born in 1970, the same year Hafez Al-Assad came to power. During her lifetime, Syria has known no other leadership than that of the Assad dynasty.

By all accounts, Yazbek should have grown up to become a Ba’athist party loyalist. She was born into an Alawite family, the same clan as the ruling family. Yazbek’s hometown of Jableh is located on Syria’s Mediterranean coast, deep in the Alawi heartland, only a half-hour drive from Hafez Al-Assad’s birthplace.

Instead, Yazbek rejected her birthright to political and material privilege and chose to stand with the persecuted and aggrieved in Syrian society. Like much of her work, Cinnamon is a biting social critique of both gender and class inequalities.

Since unrest first broke out in Syria in February 2011, Yazbek’s preferred refrains have been put on the back burner in favor of more politicized literary non-fiction on the Syrian uprising. Her most recent book, A Woman in the Crossfire: Diaries of the Syrian Revolution, was translated from the original Arabic and published in English in July last summer. The book is an intimate and disturbing testimony of the early days of the Syrian uprising from her vantage point in Damascus.

When you have become immune to the headlines on Syria, the rising death toll, and the graphic images, Yazbek’s Diaries puts a much-needed face on the conflict. She humanizes a struggle that has long been stripped of all emotion by mass media bulletins. Yet human does not mean humane.

This book is not for the faint hearted; the dairies communicate the tormented existence of a woman who knows what it is to become an enemy of the Syrian state, in raw and upsetting detail. Yazbek sided with the opposition and suffered the subsequent threat of arrest, torture, and even death at the mercy of Syria’s security services.

“The sounds of screaming and torture rang out somewhere, somewhere both far away and nearby. I was tembling. I had never heard such sounds of pain, coming from some place deep inside the earth, burrowing into my heart.”

In Diaries, the author makes the uneasy transition from novelist to journalist. Her writing style reflects this shift, landing somewhere between the two, a combination that does not always work. Real-life interviews are awkwardly stuck between metaphor and illusion. Yazbek’s traditional writing style is flowery and at times surreal; marrying this technique with hard facts results in an often-disjointed narrative. The book is packed with eye-witness accounts of demonstrations and interviews with opposition members, but all intertwined with lyrical fantasy. The continual back and forth between reality and imagination can become exhausting.

Yazbek herself admits this collision of fiction and non-fiction, journalist and novelist, the personality crisis that is really at the heart of this novel—and its author. “I want to go back to my solitude that is crowded with novel characters,” she writes.

If you find the first few chapters hard work, persevere, because Yazbek’s writing becomes more fluid after the opening entries. Indeed, it is when the blend of literary non-fiction works that Yazbek finds her moments of brilliance: poetic prose and gritty reportage successfully combine to create a terrifying picture of a woman whose body and soul are tortured by her experience of the uprising. The most vivid example of this is in her retelling of her interrogation in a prison on 10 May 2011. The account contains the most horrific and moving passages in the book.

Yazbek can be excused for her, at times, disjointed writing style in a time of such mental and bodily distress. For Yazbek, the conversion to journalism was not so much a choice but a duty. She makes clear that Diaries is her contribution against apathy and disinvolvement from the uprising, “I will not just sit by and watch everything going on all around me” she says. The courage and strength to pick up her pen and record the psychological (as well as physical) warfare she experienced is no less than heroism in a context where dissent costs lives. Yazbek was acknowledged for her bravery in October last year, when she was bestowed the Writer Of Courage Award presented by the charity English PEN, which works to defend freedom of expression in literature.

Throughout the book, the novelist in Yazbek cannot be extinguished; fiction is her survival mechanism. In the darkest moments she imagines she is a character in a novel:

“I would pretend I was a character on paper, not made of flesh and blood, or that I was reading about a blindfolded woman forcibly taken to an unknown location, to be insulted and spat upon because she had the gall to write something true that displeased the tyrant. At this point in my fantasy I would feel strong and forget all about how weak my body was, about the vile smells and the impending unknown.”

Before the uprising in Syria, Yazbek still enjoyed some clan protection; the government largely turned a blind eye to her more uncomplimentary works. Cinnamon was readily available in any Damascene bookshop in the spring of 2011 (when Arabic language students bought them up). That immunity is long gone; Yazbek was forced to flee Syria in July 2011, fearing for her life and the safety of her teenage daughter. Her increasingly outspoken criticism of the Syrian government and activism amongst the opposition branded her a traitor and placed her fate in the hands of Syria’s security apparatus. She is now living in Paris. It is rather unlikely that Cinnamon is still being taught at the University of Damascus.