When Hind asks an armed fighter of the FSA "Son, what are you going to do with your weapon once the fighting is over?" he replies, "I will sell it to pay my tuition fee" 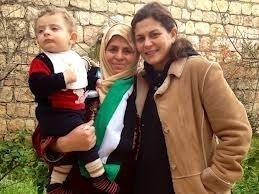 Among the privileges of my work is to know Tanenbaum's Peacemakers in Action. They are a group of rugged individuals, driven by faith, who seek peace and freedom in lands torn by war and violence. They work alone and periodically convene to learn, plan and plot interventions for peace — as they will, when they meet in NY during the week of June 16. One of our Peacemakers is Hind Kabawat, a lawyer from Damascus, who recently returned to Syria through Turkey to provide training in a village that had been "liberated" by those fighting the Syrian president, Assad. Below, in her words, are Hind's observations of people who are suffering, who hope, and who are preparing for a new Syria based on dreams and ideals. Her story is one we rarely hear in the news of battles, violence and horrific acts of hate.

My message is message of hope. In this anthology of anecdotes from my last trip to the liberated areas of Syria, I carry the aspirations of a new Syrian generation who are yearning for a brighter future for their nation and are searching for a new way to build their dreams.

Surreal and perplexing feelings overwhelmed me as I crossed the borders from Turkey to northern Syria on a cold March morning. The crisp fresh breeze of freedom that welcomed me brought childhood memories of joyful children's faces — children who waved at passing cars with foreign plates and cheered when my dad and I gave them candies on our vacation trips to the North.

Alas, the barefoot children meandering in the alleys between the destroyed houses of this village no longer wave to anybody. Instead of smiles, they wore sadness and tears. Instead of waves, their hands gestured in shivers. Instead of cheers, they sighed worries and interrogations. "Why us? Why are you here? Are you a journalist? What can you do for us?" Their feeble voices bombarded me with questions, to which all I could answer was, "I am a Syrian like you, from Damascus, coming to tell you that you are not alone, and that all of humanity is standing in solidarity with your blessed hearts."

Rima, a five-year old girl, smiled in relief, held my hand, and whispered that her dream was to go back to school. Abdul-Majeed, who was pinching and pushing his friend Fatima, said the same. Fatima, one of seven siblings whose childhood was rocked by the loss of her father, had little to say. When she did speak — with tears in her eyes — she murmured, "I have no more dreams, I want to sleep and never wake up."

I continued to walk, holding Rima's hand, gazing at the horizon as penetrating sun rays flickered on the pale olive trees of our sacred land. Here, we encountered and greeted a group of youths holding their rifles in readiness.

"Where is your camera?" one boy, Ramzi, asked.

"I am not a journalist. I am only a Syrian citizen who wanted to come and see you," I responded. "Son, what are you going to do with your weapon once the fighting is over?"

"I will sell it to pay my tuition fee," Ramzi said, hysterically laughing with hope. "My dream is to be a university student."

Further into the village, Abu Hamid, an older gentleman covered in a black outfit with a headband, smiled at me and cut me out a piece of the bread he was eating, saying, in a thick Northern accent, "to our health and freedom." I couldn't hide my tears from Abu Hamid, who concealed a warm smile behind his big beard.

I asked, "What can I do to make these little kids smile again?"

In another part of the village, tears welcomed me as I entered the house of one of my mentees' family. The family matriarch, Oum Mounzer, pointed right away at the picture of a handsome young man, her son, who got arrested while attempting to defect the army. "We don't know what will happen to him," her tearful husband added. Through his tears, he helped me sit on the sparkling clean floor, and called his younger children to come and greet me. Their warm and excited hugs left me flabbergasted. Where do they get all of this love from, while their stomachs are empty, their school, along with the whole village, lays destroyed, and their childhood has been stolen by disease, death, and hunger? How can Abou Munzer, Abu Hamid, and everyone, be so warm and caring to a complete stranger, wearing a cross, and walking around with a Canadian-made outfit in an ultra-conservative area, Jabal Al-Zawia?

We shared a meal consisting of fresh bread baked by Oum Abdo and olive oil. This has been the only staple food available to the village for months. Oum Abdo, a 60-year-old lady, proudly repeated to me that she has a grade 9 certificate, which enabled her to read the Qu'ran every night, and recently to read all the flyers and newspapers and hence spread information to others. She added that she got her son and son-in-law to both defect from the army and join the rebels, threatening to disown them otherwise, "You are no children of mine, if you help kill your own people." She said that she obtained civic identities for both of them, hid them in her chest pocket, and went to visit the young men in the army troops. While there, she passed their new identities to them and threw her verdict on them. In addition to being a brave mother, a good neighbor, and a rebel by nature, Oum Abdo is also helping develop her own community by teaching young women how to bake, a necessary skill after the village's only bakery was bombed.

Nayfah, a pharmacist who is working now in the field, is Abu Munzer's eldest and another Syrian I spoke with during my stay. Her eyes shone with joy as she recalled her five years at the University of Aleppo. Today, she works for 14 hours a day, together with her brother Munzer, helping the injured. "How can someone who went to university, and has had the privilege of knowledge, destroy his country?" Nayfa asks, referring to Bashar Assad, a doctor who graduated from schools in the UK.

After the meal, we headed to a small, partially destroyed building with no windows at the end of the alley where I was giving a workshop on conflict resolution and dialogue to a group of teachers, doctors, and members of the local committee. I was greeted by pictures of local martyrs decorating the grey walls around the new freedom flag, as well as by a group of young men and women who had enthusiastically waited since the early morning for the workshop. Despite the bad logistic conditions of the room, I have never been as ecstatic. I interacted with incredibly passionate and impressive individuals who braved the cold wind seeping from the broken windows and the noise of rowdy children playing on the street for many hours to enthusiastically engage in the workshop activities and contribute new ideas for rebuilding their community and the whole country.

It was indeed a most interesting group. Mohammad is an English teacher who is offering small classes in the village to substitute for the destroyed school. Mariam is a strong personality who is able to win the room with her arguments, stressing in every word she utters that the revolution is finally giving voice to women. Hayat, an engineer, explained how she managed to get phone lines efficiently working in the village.

After many years of community work in Syria, this time was different and refreshing. It was the first time I truly sensed people freely expressing themselves without fear of a secret agent reporting on the group. It was the first time I witnessed a new generation who is getting armed with knowledge and is committed to building a new future for the whole country.

Knowledge and education, however, are a constant struggle for Syrians all over the country, even in liberated areas. "The worst challenge we are facing on a daily basis is the inability to effectively teach our children. We don't have books, we don't have pencils. How can we send all our kids together to one school, when it could be suddenly bombed by jets?" Mariam asks. To deal with this predicament, children are assigned into groups, and each group is allocated to a basement of the different houses of the village. Old women run communal nurseries, taking care of the village toddlers and infants while their mothers teach in underground schools or help in field hospitals.

Dreams of learning and hopes of getting back to schools were echoed in every village I visited. In Kafranbel, I spent a day with refugee children in a deserted school playing hand in hand and flying balloons with the colors of the rainbow. Mona, a little girl from Maarat al-Neman, told me her dream was to get back to her village.

"But Khaleh (Aunty in Arabic), I can't go back to my school, it is completely destroyed!!!" said a cute little voice in entrancing crescendo.

"We will build a new one all together," we all exulted.

On my way back to Kansafra, I asked Mustafa, a young rebel from the Free Syrian Army, about his dreams. He replied with fervor, "to get my son to study at the university!"

"Mustafa, you are too young to have a university-age boy, aren't you?" I was baffled as I heard his words. Mustafa was eager to prove his point. He ran, dragging me with him, to a garden partly destroyed by missiles and called over two women, his wife and mother, to offer me coffee, while he disappeared into a backroom with windows covered with plastic sheets. Mustafa came back with a newborn in hand. "Mohamad," he proudly said, raising the infant towards the sky, "my son, I want him to go to university. A child born in the revolution is blessed, and deserves to live free and to have the opportunities that we were denied."

Indeed, Mohamad is entitled to that right.

Undeniably, children of the revolution have a better future ahead of them. But the responsibility on our shoulders is massive. Freedom is a big dream for them, but knowledge is their ultimate dream.

Hind Aboud Kabawat, a lawyer, is president of the Syrian Centre for Dialogue and is a Tanenbaum Peacemaker in Action.