Despite the marketing campaign, any election victory will be hollow 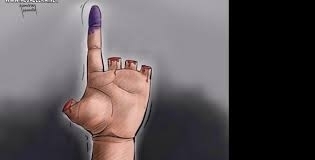 A reading of the first scene of the Syrian presidential election play, according to the media campaign and regime marketing of the Syrian citizens abroad exercising their so called "constitutional right" to vote as a sign of victory, in an attempt to show the elections as democratic and legal, is only superficial.

Let us dive slightly deeper to find out whether this first scene of the play which will be repeated inside Syria during the second scene is a real victory for the Syrian regime.

History has demonstrated that the Syrian people are historically rooted in the concept of civilization, which means they can read and analyze  events. But over the past three years, statistics has shown that over half a million of these people have been killed or missing, most of the victims killed by the regime through mechanisms it adopted to deal with the demands of the Syrian people for freedom and dignity.

How can people participate in the election which aims at raising the banner of their killer? The answer quite simply is that people are horrified that this serial killer, the murderer, has so far been free to kill several hundred thousand people. Thus, the long-term negative defense, which has a short-term positive dimension, requires that people participate in these elections as an attempt to alleviate the number of victims. At the same time, participation confirms, in a way, that the people who rebelled were right in their attempt to get rid of the horror which ruled them for decades, but because of international inaction, they did not succeed in their attempt and were forced to adopt the passive defenses represented in the participation in the elections of their killer.

The messages sent by the regime to impose these elections have the following meanings:

2.The massive participation of Sunni Muslims demonstrates that the vast majority of the Syrian Sunni people do not support radical movements, because if they did, they would not participate in the election, even if their relatives were threatened with death or arrest.

3. The sectarian game played by the regime and its supporters is over, as the ordinary people have realized that the regime is able to impose its will on the majority of communities, and those who support the regime do not act according to their sectarian identities, because the candidates for the presidency and those who promote the legitimacy of the election are Sunni.

4. The regime has proved that it is not different from any mafia, and it follows no law if it is against its will. Just as it changed the Syrian law by modifying the article that allowed Assad to gain power in 2000, it is willing to change any formula to ensure its survival. The evidence for this is that the new constitution specified the presidential term be limited to two terms, or fourteen years, but in order to give the current president the right to run again, the article said that the law doesn’t take into consideration the past presidential terms of the president. Therefore, any political reform suggested by the regime is not a reform at all in terms of its real application.

5. The regime knows that it is incapable of restoring its rule over all of Syria, and this did not prevent it from continuing its attempt to rule at least part of Syria, in real terms, and this proves that this regime is not national-minded at all.

6.The main claim of the regime is that its basic disagreement is with the armed groups, and that the peaceful political opposition forces inside Syria find in the regime a communicator seeking for a political solution. This also has proven to be fake, as the two main forces which hold the notion of democratic and peaceful solution, the State-Building Movement and the National Coordination Commission consider these elections illegitimate.

These points demonstrate that the only available solution to give priority to a political solution will be after the change in the balance of military forces on the ground in favor of the opposition. This solution is connected with reducing the power of radical Muslim forces that present a project rejected internationally and domestically This reduction will take a considerable time, which makes the coming period centered around a tripartite war, and Syria will be divided geographically and periodically. The real military powers supporting the regime in the battles to come will not be Syrian, as the regime will increase its reliance on Shiite radical movements supported by Iran.