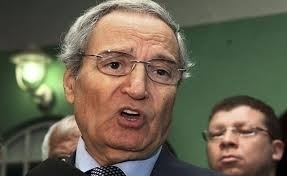 A small amount of “dissatisfaction” is what caused the removal of Farouq al-Shara’, the previous Vice President of Syria, from his position. Al-Shara’ expressed dissatisfaction with the means by which the regime hoped to quell the popular revolt against it in the spring of 2011. He did not object to the regime itself or any of its apparatuses, institutions, or “philosophy.” He was also not expelled for his sectarian affiliation, nor even for his regional background, though like Hourani he is descended from a family from Dara’a, which paid the largest share of blood in the first months of the massacres which the Syrian regime has committed against the Syrian population.

But al-Shara’ was slightly dissatisfied with the regime’s strategy. Speaking with the “regime’s interest” in mind, he wanted to give the rebels a number of superficial concessions in order to preserve the regime. For that reason alone did al-Shara’ suffer all that befell him.

Al-Shara’ was utterly marginalized, though he had represented the regime’s “civilian” diplomatic face for many decades. This marginalization made him famous, since the regime ignored his status as the “spoiled child” of its founder. Al-Shara’ had remained loyal to the regime for many years, throughout its thousands of ups and downs. He remained the loyal proponent of the regime’s rhetoric and policies, and was personally loyal to its despotic founder. He also aided the transition to the founder’s son, and was loyal to him as well. Al-Shara’ remained obedient, pliable, silent, and eager to please, but without any anger or protest on his part, was marginalized and isolated, and became famous for it, simply because of a single instance of “displeasure” with the regime’s strategy for survival.

Assad did not make a formal statement removing al-Shara’s from his position as Vice President. Instead, he appointed Najjah al-‘Attar as another Vice President, and left al-Shara’ in place without making any public statement about his status. Al-Shara’ apparently did not deserve a headline in the official bulletin, and his termination was not a political security decision. He was not even given the honor of being allowed to present his resignation, and he did not “commit suicide” with three bullets to the head. Al-Shara’ was left without second thought like a corpse that does not even deserve to rot, and does not even deserve the honor of burial.

The “story of al-Shara’” reveals three essential defects in the makeup of the Syrian regime, and its relationship with its “men and divining rods” of which al-Shara’ represented an exemplary example:

The Syrian regime itself is not actually constituted by the people who speak in its name, and its leaders are not those who hold clearly-delineated positions in the structure of the state. The basis of the regime is not its apparent “constitutional” structure, and a minister is not necessarily more powerful than the director of his office. It is possible for an apparently minor officer to be the decision-maker, and hold more power than the commander-in-chief of the military. The Syrian regime is comprised of a hidden and inward-oriented structure and dynamic, yet it is very clear to those who want to understand it but have no stake in it. The Syrian regime relies on its backbone, and on the power of the center and the particular individuals to which it delegates specific roles. Thus authority does not rest in the state’s constitution, law, or structure, or the formal positions of those within it, but is rather bestowed by the master to “slaves” who carry out his will alone.

The Syrian regime also does not follow the pattern of most despotic governments, since there are not “rival” centers of power locked in political and ideological competition with one another. The head of the regime has the only independent will in the state, and those below him are tools used to executive that will. Those competing centers of power that do exist are merely symbolic and instrumental, and include army, secret police, and paramilitary reserve units. It is true that these groups do not necessarily have common interests, and they constitute centers of power within the structure of the regime. Yet in essence, they hold the same creed and loyalty but are pitted against each other and used as instruments by the head of the regime to control society. Moreover, these groups do not have the capacity to unite against Assad. There is no place in the structure of the regime for those who are outside of this flock, which is held together by its superficial and instrumental differences, and there are no independent institutional perspectives within the regime. Rather, there are only various apparatuses designed to be unable to overthrow Assad or unite at any time against his will. These apparatuses have their own various interests and roles, but taken together they lack any independent will, point of view, interests, or group consciousness.

Finally, the Assad regime lacks a memory. The regime’s present interests and will, and the means of it future survival, are the only factors guiding its thinking and behavior and determining its strategic perspective and calculus. The regime does not have regard those who have served it for decades, nor for those who sacrificed their lifetimes, reputations, and positions for its sake. The Assad regime lacks a memory – it is an entity loyal only to its own survival, and not to anything else. Whatever his role in or “contribution” to the regime, whoever fails to go along with the regime’s current will or interests is dealt with like any other enemy. The regime treats as enemies those who have supported its against its enemies for many decades, just like it treats those whom the loyal have destroyed in its service. At any moment of disobedience, even the loyal fall into danger equivalent to that faced by the regime’s open foes.

Let us imagine Farouq al-Shara’ writing his memoirs. What can he tell his sons and grandsons, his associates and fellow inhabitants of Dara’a, or any Syrian? Al-Shara’ spent his lifetime performing his diplomatic duties, spoke in multiple languages, and took contradictory positions in the service of the regime that received his total loyalty and obedience. He gave everything to legitimize and ensure the survival of the Assad clan, and he understood better than anyone else the detestable essence of the regime that did not allow him, after all of his service, even the honor of being removed from office for a single instance of dissatisfaction.

What will al-Shara’ and his ilk say to future Syrian generations, and what shame will they carry with them?