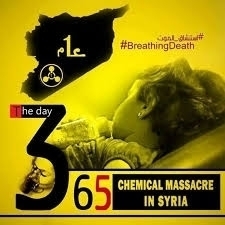 At 2:30 a.m. on the morning of August 21, 2013, statements circulated on Twitter of a chemical attack in a Damascus suburb, within days 1,500 individuals were reported dead. A UN investigation ensued as Western powers debated the appropriate response. There was a televised debate in the British House of Commons and a New York Times op-ed by Russian President Vladimir Putin, meanwhile high-profile journalists flew to Damascus for interviews. The event proved that even in the context of a war killing 5,000 a month, chemical weapons warranted special attention.

As we look back on this event one year later, a panoptic view reveals how the August 21st chemical weapons event changed the narrative on Syria. A situation first described as an uprising, then later civil-war, became a humanitarian crisis in large part due to what occurred on that morning in late August.

While post-attack footage of limp bodies foaming at the mouth caught the public’s attention, images of the crisis more broadly were responsible for sustaining interest in the following weeks. Major news programs showed video of emaciated children boiling leaves in besieged neighborhoods and refugee camps overflowing with new arrivals.

Those same images can be found today. The children are one year older, the camps even larger. If the sarin gas attack last August brought Syria’s war to the American public, its anniversary should serve as a reminder that the conflict continues. The bandwidth for Middle East news is limited, and with recent developments in Iraq and Gaza, has struggled to carry coverage of Syria. This point is not necessarily reflective of the reality on the ground. Some of the conflict’s bloodiest days have come in recent weeks. During just two days in July, a record 700 casualties were reported following intense fighting east of Homs. Meanwhile, the benchmark figures continue to grow:  11 million in need of aid, 3 million refugees in neighboring countries, 6.4 million IDPs, and well over 150,000 dead.

Amid other crises, bringing attention to Syria is a nuanced and at times sensitive pursuit. During a recent conversation with an Iraqi refugee, I explained my work at an aid organization focused on relief and development in Syria. His poignant response: “What about Iraq’s relief and development? What are you doing?” Lacking an answer as compelling as the question, I told the man other organizations were helping Iraq, that both crises were severe, but we only had the capacity to work on one. I thought back on the conversation later, wondering whether he’d found my answer satisfactory.

Prioritizing crisis response based on need is the hard reality of aid work. Commenting on these competing needs in Syria and Iraq, World Vision’s Ekkehard Vorberg recently remarked, “Even if the conflicts are interconnected – the situation in Syria is still much worse than it is in Iraq. There, the humanitarian catastrophe has persisted for several years. Children are uprooted there. Refugees have been displaced multiple times." Vorberg’s raw insight is likely true and certainly discomforting.

With the sarin gas attack one year removed and the most dangerous chemicals now neutralized, it’s an appropriate moment to contemplate the broader global response to the Syrian crisis. The chemical attack a year ago was a surprising tragedy. While the threat of this event repeating itself has been eliminated, the all too predictable humanitarian catastrophe continues. It too, deserves a response as robust as that undertaken in response to August 21st.