ISIS may have withdrawn from the Syrian border city, but Kobani is now facing another difficult battle 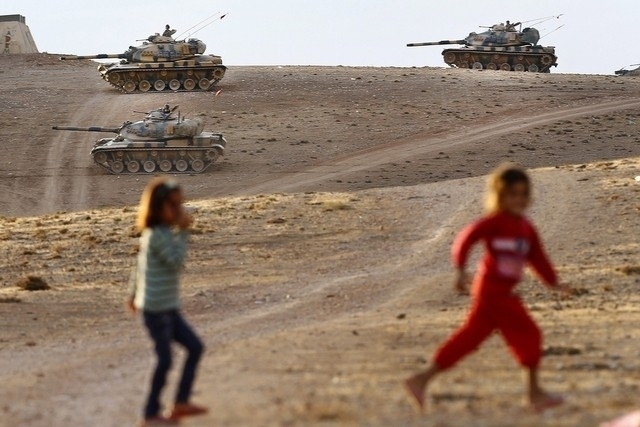 After four months of incessant fighting, the Islamic State of Iraq and Syria (ISIS) has finally been driven out of Kobani, but with much of the Syrian border town in ruins and its population dispersed, the fight for the future of the city has just begun.

Relief and celebration over ISIS’ withdrawal at the end of January have been replaced with shock and warnings of an impending humanitarian disaster in the town as residents return to a city that is dangerously uninhabitable.

Those who recently returned to Kobani have described appalling conditions: in the path of ISIS’ retreat, the extremist militants left behind booby-trapped houses, bombs and mines. Local residents told Asharq Al-Awsat that the bodies of hundreds of ISIS fighters are buried beneath the rubble and medical authorities warned of an epidemic when these bodies begin to decompose, with the town sorely lacking in medical expertise and supplies.

Ezzedine Tammo, a Kurdish military doctor affiliated with the YPG, warned of the rapid spread of disease in the border city unless something is done immediately. He told Asharq Al-Awsat: “The bodies of ISIS fighters can be found in the rubble of every destroyed building in Kobani. These bodies have not begun to decompose due to the extremely cold weather. However, during the coming period, we can expect temperatures to increase and for an epidemic to break out. So we must be aware of this impending humanitarian disaster and think about how to safely remove these bodies.”

Kobani’s medical facilities were blown to pieces in the fighting. The main hospital is now an empty shell. When Iraqi peshmerga forces first joined the fight in Kobani in November last year the only source of medical assistance was from a small but well-equipped health center across the border in Turkey. Not long after, ISIS attacked and completely destroyed the medical center in what represented a significant blow to the Kurdish forces. Although the Iraqi Kurdish forces brought their own medical experts and supplies with them to help in the war effort, it is unlikely that these limited medical capabilities will be able to deal with a city-wide epidemic.

“After the health center was destroyed, we established a field hospital in the basement of one of the schools in the west of the city. This area had seen the least destruction as it has been under the control of Kurdish forces throughout the conflict. This field hospital provided health care for YPG fighters and local residents alike, relying on external medical assistance,” Tammo said.

The anti-ISIS forces have sought, in recent weeks and months, to expand their medical facilities, receiving several batches of medical assistance from Irbil and establishing a Kurdish Red Crescent operation in the town. While these attempts have proven successful on the small scale, a post-ISIS Kobani will need much greater assistance.

“We will have a bigger problem when Kobani residents who fled the fighting start to return. We will need far greater medical assistance than we are currently receiving. We will also need more to establish new health centers and hospitals, and more doctors and nurses to staff them, in order to care for the returning residents,” he added.

Even the most basic of needs is lacking and it will take many months, or even years to make the city habitable once again. Senior Kobani official Idris Nassan reiterated calls for international humanitarian assistance. He told Asharq Al-Awsat: “Currently, there is a dangerous lack of food, and we are depending on some limited supplies from relief organizations that enter Kobani via Turkey in an unofficial manner, as well as the limited food stocks and supplies in warehouses and homes.”

“Our water supplies have also been cut off and so we are telling residents to rely on well water, even though this water is contaminated after the massive bombing campaigns affected the water table,” he added.

Nassan painted a bleak picture of life inside the city, with bodies putrefying, residents hungry and thirsty, and unexploded mines still representing a grave threat to life. Despite the scenes of joy among Kobani refugees following the ISIS withdrawal, the Kobani official said residents should not rush back.

“We are trying to attract the world’s attention to the humanitarian disaster that is brewing in Kobani. The town needs to see the establishment of an international humanitarian bridge via Turkey to allow food and medicine to be delivered to the town’s residents … but Ankara is not taking any genuine steps to secure this,” he said.

“We are seeing dozens of Kobani residents returning on a daily basis. They are eager to return as soon as possible, but before we can officially permit the mass return of residents, we must ensure that we will be able to provide them with the basic services that they require, including food and medicine,” Nassan added.

Kobani had a population of around 50,000 prior to the Syrian conflict, as the war dragged on this number expanded to more than 200,000 with Syrians arriving from conflict zones across the country. When the fight reached the border town in September, its residents were forced to flee once again.

The current population of the city stands at approximately 15,000, Tammo said, although returnees are pushing that number up on a daily basis.

“We have also seen hundreds of Kobani youth return and they are eager to participate in the operations to restore life and basic services to the city,” he added.

With spring fast approaching, and Kobani residents returning on a daily basis, stretching the already limited capabilities of the town’s authorities, what is certain is that Kobani needs help. And it needs it now.