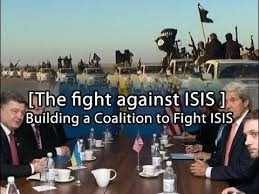 News about 75 US-trained rebels entering Syria from Turkey has attracted special attention because it marks a new development on the military arena there despite the fact that the number is not enough to shift the balance on the ground in Syria.

The military map in Syria has changed significantly, and so have the priorities of the US-led international coalition. Instead of toppling the government of Syrian President Bashar al-Assad, the coalition’s priority now is to fight the so-called Islamic State (ISIS). Prompted by fears of terrorism and Russia’s support for the Syrian government, Washington has raised the prospect of involving Assad himself in peace negotiations on the grounds that he is one of the players in Syria.

The issue of training Syria’s moderate rebels has been the subject of debate for years and no one knows why efforts have not succeeded or why support for rebels has remained limited. It has emerged that rivals who are actively engaged in the Syrian conflict are government forces backed by fighters from the Lebanese militant group Hezbollah and other Iraqi organizations on the one hand, and extremist organizations that have managed to attract foreign fighters who consider fighting in Syria a sacred mission on the other hand.

No one expects the 75 fighters to shift the balance of powers in Syria. Experiences of the past do not arouse optimism that this group will make difference. Many fighters, trained by the US to fight extremist groups in Syria, have been attacked and abducted before. The US program to train moderate Syrian rebels has drawn fierce criticism against President Barack Obama administration from the Republicans who called it a joke.

In fact, the real problem lies in the will to fight. Without a genuine will to fight ISIS and a clear military strategy, any practical results on the ground would be hard to achieve by Syria’s moderate rebels be they 75 or 1000. At the end of the day, it is a battle of wills and victory is achieved when one side breaks the other side’s will to continue fighting.

The most prominent example in this context is the Kurds’ will to fight ISIS and other similar-minded groups in Syria and Iraq. Kurdish fighters have defeated ISIS in the Syrian town of Kobani and in several locations in Iraq despite the atrocities committed by the group in the aim of terrorizing and intimidating their opponents. On the other hand, the Iraqi army campaign to liberate Anbar Province from ISIS has failed and ended with the collapse of regular forces whose fighters lacked the will to fight the ultra-radical group.

Without instilling the will to fight in the hearts of fighters, arming and training them becomes utterly useless and a complete waste of time and effort, with weapons eventually falling into the hands of extremist groups. Rebels in Syria do have a clear military strategy. It is inconceivable that the Syrian people who rose against their government would accept to be governed by a system that takes its ideas from the Middle Ages.