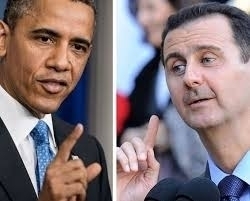 Secretary of State John Kerry’s talk of going along with a “complete and clear” operational understanding with Moscow represents a significant shift. It is significant not only as far as its handling of the Syrian crisis over the last four years and a half is concerned, but also as regards its initial reaction to Russia’s recent logistic moves a few days ago.

At the beginning we heard, as did the American public, that the Barack Obama administration was “concerned” by Moscow’s show of force which has gone far beyond the long familiar military aid to become an effective military presence, and takeover of facilities and airbases, reaching even the deployment of a fighting force.

The denial uttered by Walid al-Muallem, the Damascus regime’s foreign minister, of rumors about such deployment in Lattakia as well as other Syrian areas, ended by virtual confirmation of what he started off denying; when he said that Damascus was willing to ask for direct Russian military if the need arises.

As if in a theatrical play, no sooner had the confirmation-intended denial been uttered, than Moscow declared its readiness to provide combat troops the moment it received a formal request from Syria’s Bashar al-Assad, whom the Russians regard as “the legitimate leader”.

In the meantime, Washington’s “concern” seemed to have dissipated, and following the now only too familiar pattern, ended with the virtual acceptance of Moscow’s viewpoint on Syria. Within a few hours and a number of phone calls between Kerry and Sergei Lavrov, his Russian counterpart, the secretary of state said “The US would welcome a constructive Russian role in counter-ISIS efforts,” and went as far as expressing its willingness to begin ‘military talks’ with Moscow. Then, after the cautious welcome, Kerry made it crystal clear at a press conference in London that he fully agreed with the Russian viewpoint towards Syria, candidly and stubbornly expressed by Moscow since the first round of Geneva talks (dubbed Geneva I).

Kerry has specifically adopted Moscow’s two primary positions: the first, making the “war on terror and extremism” the basis of any international approach in Syria; the second, putting off for the time being any discussion of the fate of Assad, rather than making it the first step in any discussion of a political settlement, as the Syrian opposition has been demanding since day one. Kerry has now made it clear Assad does not have to leave anytime soon when he said: “It doesn’t have to be on day one or month one. There is a process by which all the parties have to come together and reach an understanding of how this can best be achieved.”

It is, indeed, quite interesting that Washington is still blabbering that “there is no place for Assad in a future Syria”. The experience of the last four years with what the Obama administration promises hardly encourages anyone to believe that such a statement means anything.

On the other hand, talking about Assad, as an individual may have now become pointless and overtaken by events. It is true he has been the face of the Syrian tragedy as well as its main cause, but it is also true that as an individual he is now but an irrelevant and worthless detail. Those in control in Syria today are the ones who are striking deals, bringing in sectarian fighters across the border, and drawing with blood the maps of Syria’s partition.

Assad would not make any difference anymore if the political settlement, being promised by Washington and its new partners, Moscow and Tehran – and surely, Israel, albeit from behind the scenes – is going to confirm the apportioning of zones of interests and control, and give the partition of Syria an official stamp of international approval and legitimacy at the highest levels.

Talking again and again about the areas the regime, its backers and sponsors are keen to keep for themselves, is becoming boringly familiar. It is well-known that in the absence of any meaningful political solution to the Iraqi problem it will become extremely difficult to maintain order and control of the desert and semi-desert region covering western Iraq and eastern Syria – i.e. the provinces of Al-Anbar, Salah Al-Din and Nineveh in Iraq, and Deir-ez-Zor and Raqqa in Syria.

This region, which is predominantly Sunni Muslim, finds itself squeezed between the hammer of the expansionist Iranian project extending all the way westward to the Mediterranean, and the anvil of the Islamic State (ISIS) phenomenon which is now the justification of a new ‘Sykes-Picot Agreement’. Sure enough the Sunnis of this region are now paying an exorbitant humanitarian, political, and habitational price.

How does Washington plan to take part in “the war on terror” now that it has just discovered the “elusive secret formula”, and has publicly decided to cooperate with the Russians, and as yet tacitly with the Iranians, in combat duties? Washington’s conditional arming of “moderate” Syrian opposition fighters is looking nothing more than a ridiculous attempt to numb and buy time.

Furthermore, the American pitiful gamble of overcoming the Turkish – Kurdish dilemma in conducting the “war on terror” by intentional ignorance must be seen either as astounding denial of facts on the ground, or flagrant ill intentions towards Turkey. The latter may be unable on its own to achieve much, but can surely make the situation ever more complex.

As regards the Arab states, if Washington continues to dismiss their misgivings about its blessings of Iran’s hegemony over Iraq, and its self-delusion that the Syrians’ would accept the perpetuation of the four-decades old despotic mentality and its security and suppression, they would realize that nothing is going to change in Syria except the portrait of a figurehead president.

Today, there are facts on the ground in Syria that are interconnected; thus, it would be illogical to deal with them separately. Among these is the fact that Iran has regional interests, some of which are legitimate; however, they must not be imposed on the peoples of the region either by force or sectarian blackmail. Russia too may well have worries that deserve to be addressed in a positive and rational way.

Israel sure is a more than capable regional player, and although it has desisted from diluting its identity, it will never accept being sidelined or overlooked. Last, but not least, it would be absurd to think that American fiddling with Kurdish national aspiration will not be costly; more so when the “national Kurdish homeland” destroys Syria and Iraq, and even threatens to become a time bomb for Turkey and Iran.

Assad must leave. There should not be any doubts about that; but the policy of “fighting ISIS” alone must not conceal Washington’s frighteningly contradictory approach to the Middle East’s problems; including turning the Arabs and their countries to failing experiments.