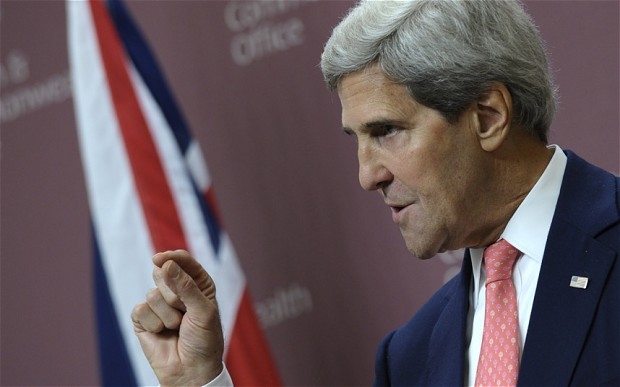 The “Russian warning” that Secretary of State John Kerry brought to the head of the Syrian opposition’s High Committee for Negotiations, Riyad Hijab, during their meeting in the Saudi capitol, was the subject of interpretation and discussion between the Friends of Syria Group nations and the opposition leadership over swallowing the “poisoned cup” and its decision on whether its representatives will attend the Geneva talks under the conditions set by Kerry’s and his Russian counterpart.

On Saturday afternoon, Hijab was informed by Kerry that the talks would be to “form a joint government with the regime and work on elections within which (President Bashar) al-Assad would be entitled to be nominated, and that there is no timeframe for Assad’s departure.” This is built upon a roadmap endorsed by UN resolution 2254 last month on the basis of the International Syria Support Group’s understandings in Vienna, in turn built on Iran’s four-point plan, and include “a ceasefire, a united national government, constitutional reforms, and elections,” according to what Hijab told his associates and Western officials. He expressed concerns America was giving up on a “transitional ruling authority in keeping with the Geneva declaration” of 2012 and was “adopting the Russian-Iranian interpretation of a political solution, and relying only on the authority of Vienna.”

Regarding the formation of the “Riyadh list” delegation, Kerry informed Hijab — a defected prime minister — that he had to add the head of the Kurdish Democratic Union Party, Saleh Muslim, head of the Syrian Democratic Council, Haytham Manaa, and the leader of the Popular Front for Change and Liberation, Qadri Jamil, to the opposition delegation, or the UN envoy Staffan de Mistura would invite them to Geneva as “consultants and experts”. The opposition should also not expect the implementation of “confidence-building measures before the negotiations, because these are subject to the negotiating process.” Indeed, some Western sources involved in the negotiations went further, stating: “We consider the beginning of the regime allowing humanitarian aid into Madaya (in the Damascus countryside) to be the beginning of the confidence-building measures,” that demands to implement articles 12 and 13 about ending the blockade, releasing prisoners and halting indiscriminate fire are “preconditions,” and that Kerry and Lavrov “are in agreement about negotiations without preconditions.”

According to Hijab, Kerry’s “messages” included a “warning” that the negotiating committee must go to Geneva on these conditions and “with no guarantee of implementation. Otherwise, our support for the Syrian opposition will halt,” and that, “in the event that the opposition goes to negotiations and the regime thwarts the process, we can’t promise to increase support, even if Russian bombardment increases.” The military operations rooms in Jordan and Turkey, which includes support from the CIA, are responsible for coordinating military and financial backing to opposition factions in northern and southern Syria, particularly related to the TOW anti-armor missiles, which were responsible for the “tank massacre” that destroyed more than 100 tanks and machines in central Syria last October.

In parallel with Kerry’s meetings with Gulf Cooperation Council ministers and Hijab in the Saudi capital, US Vice President Joe Biden held talks with Turkish leaders aiming to try to “isolate” Turkey from Syria, impose border security measures to prevent infiltration and increase operations against ISIS to “strangle” the organization. It also included “softening” Ankara’s position on the possibility of finding a formula for the Democratic Union Party to participate in the Geneva talks, especially after the Turkish foreign minster informed those concerned that if Muslim were to participate in the Geneva talks, Turkey would pull out of the International Syria Support Group, and that the Syrian National Coalition will not participate in Geneva, at a time when American military cooperation with the People’s Protection Units is ongoing, and the possibility is being discussed of setting up a military base in an agricultural airport in eastern Syria, dozens of kilometers from the Qamishli airport, which the Russians are preparing for their operations.

Also in parallel with that, Syrian regime forces with Russian air and land support have been advancing into the last Syrian opposition bases in the Lattakia countryside and have come close to cutting rebel supply lines with Turkey.

As soon as the Kerry-Hijab meeting concluded, the High Committee’s communications intensified from more than one direction. Some members blamed Hijab because he “provoked the Russians” by appointing the defected general as head of the negotiating delegation and Mohamad Alloush, an Army of Islam leader, as a top negotiator. Others questioned “whether this escalation was coordinated with regional countries or whether it was a miscalculation of the American position and the positions of regional countries supporting the opposition.”

Alloush sent a summary of Kerry’s “warnings” to leaders of militant factions to gather support. Other members sent it to Syrian National Coalition leaders, while some members began a campaign against “the dictates of Russia and America.” Yesterday morning, the High Committee was headed toward boycotting the Geneva talks. Indeed, some began preparing for a “popular campaign” against the talks, culminating in planned protests by activists and the Free Syrian Army this Friday. The gamble here is that France, Britain, Turkey, Qatar and regional countries would “stand with the opposition and distinguish their positions from the American position.”

This called for “urgent intervention” from Western countries and Washington. American envoy Michael Ratney met with Hijab yesterday and strengthened contacts with the envoys of Western and regional nations to find a way out and “find the voice of reason”. The American effort focused on “cooling” what Hijab considered to be “warnings”. The formula was that the opposition could be “flexible” and go to the Geneva talks and state its “solid” position, which is that “it wants a transitional government authority with full executive powers and no role for Assad in Syria’s future” as the first item on the agenda. This means that “the committee’s position turns from pre-negotiation to a negotiating position.”

One of them came up with the idea that Army of Islam leader Alloush be convinced to “voluntarily step down” and that discussions of military and security dimension of the negotiations be left to Free Army representatives, after the commission was informed of the need to change Zouabi and Alloush following Moscow’s objection, especially given that the first round will not discuss military affairs.

Other representatives from countries allied to the opposition viewed it as a necessity that the negotiating commission go to Geneva, because it would be hard to defend a boycott of the political process, particularly given that the government delegation is formed and the United Nations has been informed of its names. These include 17 members, headed by deputy Foreign Minister Faisal Mikdad, the “General Supervisor, based in Damascus,” and Ambassador to the UN Bashar al-Jaafari, and includes members from several confessional, ethnic, religious and political backgrounds, including a representative of the Syrian Social Nationalist Party, Amal Yaziji, and head of the National Initiative of the Syrian Kurds, Omar Owsi, in addition to 19 “media”. The United Nations was also informed that members of the “Russian list,” including Jamil, Muslim and Manaa would arrive in Geneva shortly.

For his part, de Mistura, strengthened by the extension of his term to September by UN Secretary-General Ban Ki-moon, and who still has ambitions to visit Riyadh, presented this afternoon from the United Nations podium an explanation for the delay of the talks, which were initially expected to be held today. He continued to prepare for these talks in accordance with a new vision, which is that the delegations will come to Geneva on Wednesday or Thursday to hold indirect negotiations with the representatives of the parties sitting in separate rooms and de Mistura and his team roving between them.

The first thing the international envoy and his team have to solve is the problem of the opposition delegation’s representation, and whether the “Moscow list” will tinge “the Riyadh list” or will deal with some of its members as consultants. Second, they have to solve the “knot” of the negotiations program. The government wants to discuss “fighting terrorism”, while the opposition wants to discuss a transitional governing authority, which Damascus considers “finished according to resolution 2254, and discussions are only about a national unity government.” This opens the possibility of forming a national unity government, based on the “Russian list,” a possibility which Geneva should not pave the way for, some opposition members believe.

Third are confidence-building and “goodwill” measures amid the opposition’s worries that Geneva will turn into “humanitarian negotiations”, not political. A human rights monitor said yesterday that 400 people in the blockaded area of Madaya are in need of urgent care, and that Russian air raids killed 100 people in a village in the Idleb countryside. Meanwhile, the government is talking about areas blockaded by the opposition.

Fourth is a ceasefire. Damascus has rejected a ceasefire “because we are in a state of defense against terrorism, and it is up to others to stop the aggression,” whereas the opposition wants a complete ceasefire after the political process advances. Here it seems that Kerry is the only one who wants a ceasefire, unlike the government, opposition, and their allies.

De Mistura will carry these thoughts in his mind to Istanbul in the next two days to present them to the Coalition and the Turkish government before the start of indirect talks, for which logistical preparations are underway, as though they will start next Thursday for two weeks, in order to connect to the arrangement of the ministerial meeting of the International Syria Support Group in Vienna to study results that have been achieved and the possibility of advancing and holding direct talks to implement resolution 2254.

Additionally, German Foreign Minister Frank-Walter Steinmeier told the Frankfurter Allgemeine Zeitung newspaper yesterday: “I fear that we have passed the stage where we can really pick and choose all the parties and negotiators. Of course we don’t want terrorists and Islamist extremists at the table who only want to sabotage the political process, but we want a coalition with all who represent segments of Syrian society, have real power, respect the Vienna principles, and who are ready to stop fighting through the Geneva talks.”