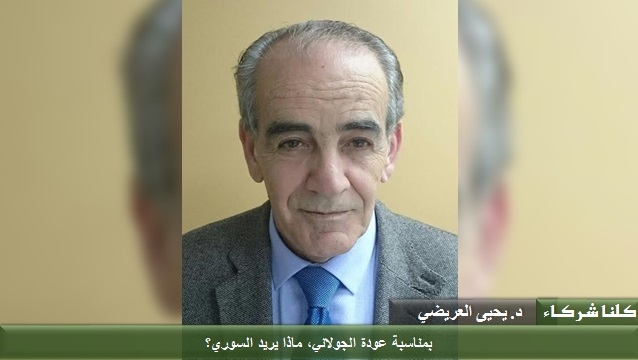 We don’t know if Jolani’s words regarding the regime deserve pause, or whether they are just another thing he felt he had to say. We don’t know if it would be more accurate to develop the first part of the headline to read, “return to the embrace of the nation” — the nation which Bashar al-Assad and his protectors and loyalists have plunged into this degree of bloodshed.

Discussion of the “Nusra” valor and heroism is limitless and unmeasurable, but discussion about the severe militarization of the Syrian people and the regime’s wish to arm people and to suppress the voice and will of the people has not really happened. Worrying about arms bearers was the last thing Syrians wanted, and the regime paid no attention to this in its desire to crush and silence their voice and pollute it with weapons, and blood and killing.

The return is no longer beneficial. It was not what Syrians wanted, and did not come except after an unholy mission, in order to carry out another unholy mission of proving the regime’s theory that those who resist it are terrorists, and they are the ones destroying the country and expelling the slaves. But it can say now, with all cowardice, that it is changing its name, to avoid being finally crushed.

Returning to what Syrians want — in light of Nusra cutting ties and of the existing fissures, what the Syrian wants may be the hardest question confronting any researcher after five years of the Syrian war and his country undergoing every type of scattering, illogic and unnatural, inhumane and even inhuman categories after losing all standards and systems and controls which could form guiding points or bases or standards to monitor or measure or describe or analyze or deduce the attributes, ambitions, or features of the thinking of a society or bloc or blocs of humans living on this planet in a specific geographical location. What do Syrians want and what have they obtained? What do they want and what must they obtain in order to exist?

First, what Syrians said when they discovered they had vocal cords and a larynx that could pronounce the word “freedom,” they shouted: “The people want the downfall of the regime,” and it was known what they meant by the phrase “regime.”

Five years or so, and he who has remained and seen it has passed through what human history has never seen nor witnessed, enough to change humans and stones, and even laws. But most important is that the icon ripened into an eternal truth, as if it was one of the laws of being and existence. It has developed, and matured — its dust is real, creative in spite of complications, determined despite the woes, stimulating despite the pain, and hopeful despite the frustrations — and it will not be other than what the Syrian desires, even if it is only a part, and at the very least it will not go back to how it was.

In the latest developments, and with Jolani’s emergency return, one must say to the Syrian, where are we? And what the Syrian wants does not come just from him but from all involved in his case.

We want a break with vengeance, and hatred, and takfir, and oppression, and persecution, and killing, and slaughter, and cult of personality, and living in tombs.

We want planes to protect us, not to bomb us. We want a God who we love, and who loves us, not one used to frighten and terrify us. We want a human leader, not an idol who kills us when we set him up. We want a scalpel that eradicates our pain, not that cleaves and chops our heads. We want love and life and dignity, not hatred and living like we are already dead.

The Syrian wanted that when he came out at the beginning and he wants it now and will continue to want it, whether Jolani returns or not, and whether ties are broken or not.