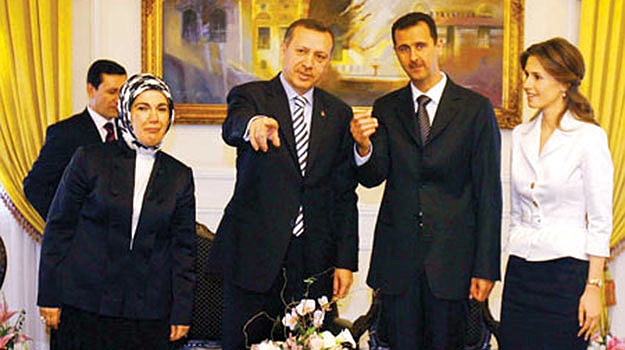 There are no permanent enemies wherever interests rule over policy. From here, (Turkish President Recep) Erdogan believed six years ago that he could bring down the Syrian state and force President Assad to leave, as occurred with the presidents of Tunisia, Egypt and Libya, because of a number of internal and external factors, including the desire of the United States and the so-called international community under the pretext of spreading freedom, justice, democracy, and improving the social and economic conditions of some communities. And so the West allied with the global Muslim Brotherhood movement to carry the so-called Arab revolutions and devolve the rule of Arab republics on the condition they were friends with Israel and accepted normalization of relations. Compare this to what happened 11 years ago when the Justice and Development Party in Turkey reached power under Erdogan’s leadership, presenting an image of a Muslim leader wearing a tie and presenting his wife at official visits and occasions wearing an Islamic hijab.

Erdogan built political and economic relationships with most Arab countries and Iran through the gateways of Syria, bringing the volume of commercial exchange to high levels in comparison with previous years. Turks consider him the leader of an economic revival and his revival would not have materialized if not for the role played by Syria in contributing to regional security and stability, despite the wars in Gaza and the war in Lebanon in 2006. But Erdogan’s arrogance and his loyalty to the Muslim Brotherhood organization and the hopes he held of achieving the US project of creative destruction and his Ottoman ambitions in power and obtaining Syria’s oil and gas riches, gave him the belief that he could clear the region of problems and reap massive economic resources for Turkey besides the ideological campaign. For that reason, we saw the man at every moment looking over us, wanting to pray… and fight… and win… hysteria and sickness befell him, until the failed coup occurred in Turkey.

In one night, Turkey was exposed, and Erdogan’s dictatorship appeared, throwing more than 25,000 people in prison, including journalists, judges, politicians, members of the police, the intelligence services, and generals.

This exposed the fragility of rule in Turkey and its agencies, as they had been penetrated by the Fethullah Gulen movement and American intelligence.

Erdogan believed that with the opening of Turkish territory and border crossings for terrorists and those who carry arms into Syrian territory, Turkey would be free of terrorists. But Erdogan’s political dreams collided with reality as the last few months have exposed the fragility of the Turkish political institutions and the Turkish internal divisions at different levels, including the social and media levels. To make matters worse, the Kurdish threat in southern Turkey has begun to develop because of the alliance of the United States with some Kurdish groups, and all the media and political propaganda of Erdogan and the officials of his government have not been able to present an image of Turkey as a strong democratic country with influence in the region.

The Syrian state was unconcerned with these regional and international alliances against it and President Assad did not heed the nonsense and follies of the Western, Arab and Turkish politicians. President Assad has known from the beginning that the American-Zionist project wants primarily to target the Syrian state as revenge for its positions opposing and preventing its colonialist projects in the region, and therefore direct rhetoric to the weakest link — the people — at all levels and categories, including religious, sectarian and takfiri rhetoric. However a large portion of Syrians were aware of this and rallied around their leadership, while President Assad was not far from his people, despite the security risks that surrounded the country. He remained the protector in order to let all those conspiring against Syria know that they were facing a brave president, wise in the ways of administering the state and calm in responding to all the noise and madness of Erdogan and America.

Therefore President Assad behaved with the responsibility of a statesman and was open toward the peoples of the world, al the while distinguishing between the people and their ruling regimes. He had many meetings with political parties and forces and Turkish media, and similarly with the matter regarding the West, from which popular and media delegations came to Damascus and with whom President Assad met to listen to totally different viewpoints from those in his media and from his officials. This left a favorable impression of Assad and the right of Damascus to defend itself from terrorism.

In politics, power lies in compelling the rival to need you despite his opposition to you. Terrorism has spread throughout the region and flared up on Turkish territory. The Syrian state with all its institutions has remained steadfast and implemented the promises of the president to liberate Homs, Aleppo, and other areas, while the Russian-Iranian alliance with a strong, cohesive state like Syria (and supporting the Syrian army in its fight) are all reason enough to compel Erdogan to pull back from his project of dividing Syria and bringing it down. This does not mean that the tripartite agreement between Russia, Iran and Turkey will persuade the Turkish player and compel it to love the Syrian state… Erdogan finds himself alone in the region, especially with the arrival of Trump to the White House, and so will bear the consequences of his support for terrorism. For that reason, he has lobbed accusations against America and NATO in recent days.

Likewise Erdogan will be alone in the Turkish interior because of sharp political divisions and it is likely he will not be able to remain in power in light of the internal political conditions in Turkey. Erdogan was demanding and threatening the removal of President Assad, but today it is he who is threatened with having to leave at any moment and with domestic tribunals because of issues of corruption, and foreign tribunals because of his direct support for terrorism.

In the tripartite meeting with the Turkish foreign minister, as Erdogan previously heard from Putin in their recent meeting, there was no discussion of departure because President Assad’s presence has become a guarantee, not for Syria alone, but for the region and its stability. Erdogan is in need of the Syrian state to preserve Turkey’s security, and he is the reason for the opening of the Turkish file before American intelligence, which almost ousted him.

Turkey is not in an enviable position after the killing of Russian Ambassador Karlov, as well as the latest Istanbul operation and continuous ISIS threats against it after it burned two Turkish soldiers alive … Perhaps the opportunity to seize the moment is important for politicians and for that reason Turkey signed the agreement and convinced its armed groups to comply and sign the ceasefire.

The opportunity is still favorable for Erdogan if he wants to reenter the political and international scene after his fall, however, this time not through America and the Gulf, but through one of his bitterest foes — through President Assad.