Various opposition groups are refusing to cooperate to form a delegation for the upcoming Geneva negotiations with the Assad regime, as rifts emerge between the HNC and rebel leaders who participated in the Astana meetings late last month, Ibrahim Hamidi writes 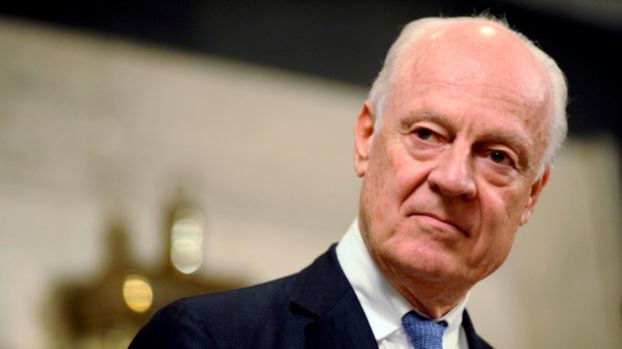 International envoy Staffan de Mistura is holding off sending invitations to the Geneva talks for a number of days as complications remain surrounding the makeup of the opposition’s delegation. The UN envoy is continuing not to accept the High Negotiations Committee (HNC) monopolizing the opposition amid rising tensions with the armed rebel groups who participated in the Astana meeting — as these groups hold the majority of delegation seats.

De Mistura had notified the Security Council last week that if the HNC did not form an opposition delegation before February 8 he would invite figures he sees as appropriate and form an opposition delegation in accordance with Resolution 2254 to hold the negotiations with the government delegation in Geneva on February 20. He brought this task with him to Washington and asked for the support of the new US Secretary of State Rex Tillerson and Middle East official in the National Security Council Derek Harvey.

De Mistura’s office announced that in light of the ongoing consultations with the Syrian parties around the formation of the delegations on February 8, the office will send out invitations in the coming days. It added that the envoy maintains his desire to hold the talks on February 20, regardless of the date the invitations are issued.

However the biggest challenge is coming from within the opposition, as the armed groups which participated in the Astana meeting last month have begun to demand more than 51 percent of the seats in the opposition delegation and have left the other seats to the remaining blocs and the committee, which would be a rejection of another proposal guaranteeing that the opposition delegation comprises a third from the HNC and the National Coalition, a third from the armed groups who participated in Astana, and a third from the Cairo and Moscow groups and independents and other figures, like the former Coalition head Moaz al-Khatib.

On the eve of the meeting of leaders from the HNC, to be led by coordinator Riyad Hijab in the Saudi capital, the head of the factions, Jaish al-Islam commander Mohamed Alloush denied that there were any differences with the committees, saying that “The aims are united between the military delegation and the committee.” However, Moscow’s inducements to acknowledge the legitimacy of rebel groups — including Jaish al-Islam and Ahrar al-Sham, as well as other moderate and Islamist groups after months of being labelled “terrorist organizations” — has been a source of concern for the committee and the political blocs on one hand and the political powers loyal to Moscow on the other.

If the issue of forming the opposition delegation is resolved, de Mistura will insist on holding the negotiations on the 20th of this month in the hopes of this leading to political talks between the Russian Foreign Minister Sergei Lavrov and US Secretary of State Tillerson in Munich at the end of the coming week to provide political cover, considering that the position of the American envoy Michael Ratney on the Syrian issue is still based on the dynamics and instructions of the previous Secretary of State John Kerry.

Given that the armed factions have demanded progress in the ceasefire and monitoring mechanisms to stop breaches, especially in the Damascus countryside and its eastern Ghouta, de Mistura’s team hopes that the coming meeting of Russian and Turkish and Iranian officials on February 15 will lead to conclude an agreement on how to deal with ceasefire breaches in addition to achieving an advance in the humanitarian file, especially given that the international envoy’s team estimates that January was the worst month in delivering humanitarian aid in a year. The United Nations has presented 21 requests to Damascus to deliver aid to about 914,000 people under siege, despite obtaining only one approval to deliver aid to 40,000 people.

A member of Russia’s Duma committee for defense affairs, Dmitry Sablin, who heads the parliamentary delegation to Damascus, said after his meeting with Bashar al-Assad this week that Damascus is “ready to hold direct talks with all representatives of the opposition including the armed opposition,” and that Assad “supports the Russian efforts in Astana and the outcomes of the recent meeting of the joint group around monitoring the implementation of the ceasefire in Syria.”