De Mistura’s incompetence led to the failure of the talks at Geneva as every platform vied for divergent interests, giving hope that his exclusion as a special envoy at Astana will bring about good results 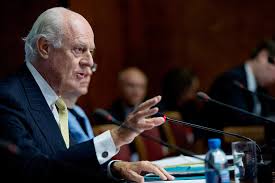 On the fourth day of the Geneva negotiations between the Syrian opposition delegations and the official Syrian delegation, the international envoy, Staffan de Mistura, announced that important progress had been made after agreement on the recommendations paper.

I personally tried to obtain a copy of the U.N. envoy’s recommendations, and indeed I succeeded in obtaining a copy in the morning of the same day. However, I was immediately shocked as soon as I started reading the items contained in de Mistura’s paper. At first glance, I thought that there was an error. But after I confirmed the veracity of the ground rules contained in the paper, I felt I was standing before a schoolmaster recommending that his students comply with the school’s instructions before entering the classroom by avoiding to use offensive language, bringing in cell phones, record or give away details of a lesson. De Mistura’s items lacked only lacked one thing: to ask shorter students to sit in the front of the classroom and taller ones take the back seats.

It is a painful image, especially when we discover the lack of seriousness in discussing the future of a country violated by a war waged by others and ongoing conspiracies on its territory for more than six years and counting.

History has never before told us that negotiations, which are supposed to end a destructive war and discuss the future of a country, have previously occurred between a state and groups that call themselves “platforms.” Each one of these platforms is working separately and in isolation from the other platforms with contradictory aims to implement suspicious agendas to fulfill the interests of foreign and Arab countries that have conspired against Syria, the nation and its people. In addition to the Riyadh platform, there is Turkey, Russia, Cairo, Hemeimeem and the internal platform. Some are about to introduce their own private platforms to participate in the platform market and create a new platform ready to be put up for sale.

What is remarkable in this matter is that the Geneva talks between platforms and the Syrian government delegation coincided with a call to vote on a U.N. draft resolution which was presented by France, Britain and the United States at the instigation of the Gulf countries. This resolution recommends the imposition of additional sanctions on Syria on the grounds that the Syrian army used chemical weapons, committed war crimes and violated human rights, while no firm evidence has been presented. However, as a whole there were and still are issues ready on demand to be pulled from the drawers of the offices of the Security Council with dubious timing to put pressure on Syria or to obtain concessions. But Russia, sponsor of the Geneva talks, used its veto power for the seventh time in solidarity with China, frustrating any efforts aimed at imposing penalties on Syria.

The Geneva talks ended, and whoever read the closing resolutions put forward by de Mistura knows entirely the extent of the superficiality of the results and the lack of any significant progress.

One platform wants first clarification of Resolution 2254 and another platform wants to discuss the item related to the formation of a body to supervise the implementation of the resolution. Another platform is pushing for federalism, and the last platform wants to unify the platforms but with differing aims and interpretations. Even the members of the so-called Riyadh platform contradict one another because each member has a different aim from the others.

The Geneva talks ended with an agreement to discuss the four items without giving priority to any of them, with disputes continuing over the interpretation of the items of Resolution 2254. Preparations are underway for the new round of talks in the Kazakh capital Astana with a notable marked difference — the Astana talks are under the supervision of Russia, Turkey and Iran directly, and with the U.N. envoy observing. This will help undermine the efforts of the U.N. envoy to stall and to tamper with the track of the negotiations, and therefore the Astana round enjoys a greater chance of being productive.