As the results of Geneva talks divide the opposition delegation into parties of optimists and pessimists, the regime is swiftly extending its control, leaving little doubt that the revolution is nearing its end 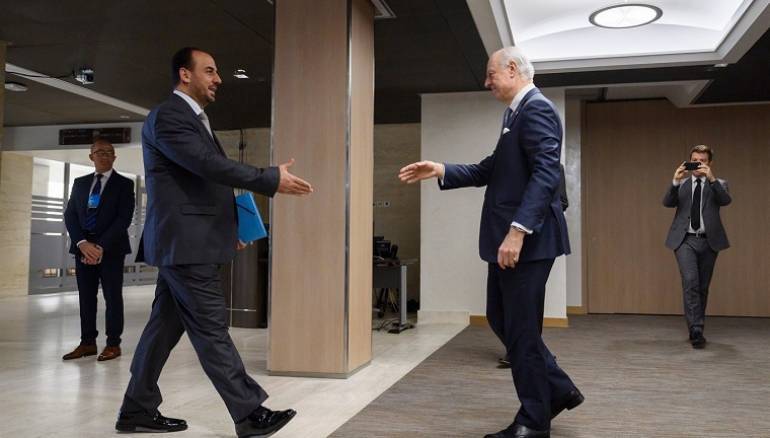 The opposition delegation’s members differ over how to evaluate the results of the fourth round of the Geneva peace talks. Disparity in their positions became evident as some thought the result of the talks resembled those in the previous rounds while others considered them a breakthrough.

The more optimistic delegation in this round was led by Naser al-Hariri whose enthusiasm remained constant throughout the discussions. He appeared “happy” at the final press conference since the transitional stage had finally entered the negotiation agenda.

The Syrian population, however, see no hope in these international and regional charades. Syrians seek one goal and that is to see the end of Syrian President Bashar al-Assad’s rule, and anything short of that does not merit discussion.

Since the loss of Aleppo in December 2015, the situation has changed radically. Wadi Barada has fallen and the regime is razing Idleb and Al-Waer to the ground. Despite all these differences some politicians still talked of political transition with an increasingly more violent regime as the world turns its back on the Syrian people.

Fayez Sara, an opposition figure, described the talks as “a Russian success and the collapse of all the rest,” a poignant comment on the tragic situation of the opposition.

Negotiation delegation member Fouad Alaiko succinctly described the talks as “done in vain,” adding a bitter drop to the sea of the pain of the Syrian revolution.

Ibrahim al-Jabawi, the manager of the Syrian Media Association was the only one who appeared optimistic as, in his view, the negotiation delegation displayed a firm dedication to the revolutionary line.

However, the real question facing the opposition and the Syrian revolution is who represents the winners and losers of the Geneva 4 talks.

Last year during Geneva 3, various countries pleaded with the opposition High Negotiations Committee to attend the meetings in Geneva. The opposition had a strong standing at the talks as its military factions held territory, presenting a formidable front against the regime and the Iranian militias. The opposition was able to press its demand for Assad’s departure. Riad Hijab, the head of opposition delegation, threatened that he would not attend the talks. His threat led to promises to opposition leaders that aid would be allowed into besieged cities and that the regime would face pressure to stop the massacres.

Most of these promises were unfulfilled, but the promises symbolized the opposition’s international standing. The promises signified the consideration the Americans and Europeans afforded it. During this time, the factions in Aleppo and the north and the southern front still constituted a strong force.

The Geneva 4 talks presented a much more pessimistic outlook for the revolution.

The Cairo and Moscow platforms attended the High Negotiation Committee as equals. The fighters were broken after losing Aleppo and Wadi Barada. The talks included a new political discourse about “baskets,” new political philosophies (1 3) and, most importantly, there was no mention of Assad leaving. The opposition flirted with Russia, appointing it as a mediator to pressure the regime while Russian airstrikes were devastating Idleb.

In the meantime, flights to Astana do not stop, and each military delegation comes away “duped” with promises of returning to the conference halls as the regime forces continue to advance on the ground.

Politically, the odds are not in favor of the opposition. The Europeans have escaped the Syrian nightmare, the Turks are exhausted with trying to destroy the Kurdish People’s Protection Units, the Friends of Syria Group is totally absent, and U.S. President Donald Trump is busy with the issue of wiretapping in the White House. The Russians have filled the vacuum, taking the lead in the Syrian question.

All actors are fleeing the Syrian hell, and the opposition must deal with the situation on this basis. No one respects the negotiations, but all respect power. They created the opposition when the factions were taking on the regime headquarters. Today, in the opposition’s moment of weakness, no one will hand the opposition delegation the gift of the transitional governance committee or the promise of Assad’s departure, let alone presenting these on a gold platter. The revolution started on the principle that the Assad regime must go; when this is no longer the revolution’s goal, it means the revolution has reached its closing chapter.