Al-Hayat columnist Ibrahim Hamidi highlights four observations in the aftermath of the first American strike on Syrian army positions, explaining that the coming days will show which of two tracks will be taken by Russian and the U.S. in response — military escalation between the two superpowers, or a renewed interest in a military-political agreement 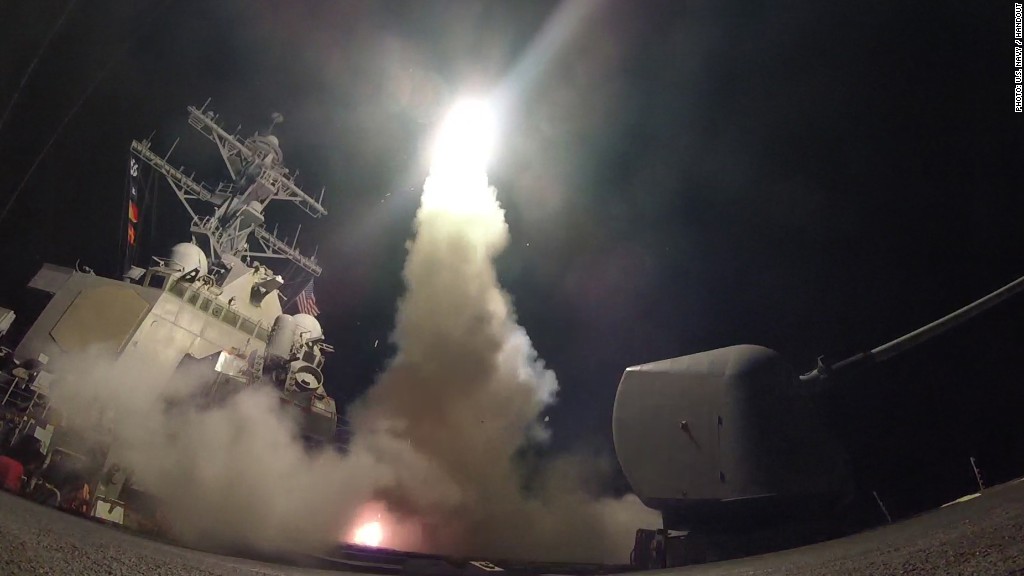 The American strikes have put the Syrian crisis at a crossroad: either Washington and Moscow will cooperate to find a political settlement and trade-off on several issues across the world, or there will be an escalation between the two countries, with America on the one hand forming an international and regional alliance, and Russia on the other strengthening its cooperation with Iran and its military presence in Syria.

According to Western officials, there are four observations that can be highlighted with regards to the first U.S. strikes on Syrian army positions – if we ignore the controversial attack the U.S. air force carried out last year in Deir-ez-Zor:

First, President Donald Trump, who during his campaign raised the "America First" slogan and rejected foreign intervention, ordered the strikes without the support of the U.S. Congress or the results of an investigation into the chemical attack on Khan Sheikhoun, and without the cover of the United Nations Security Council or an alliance with his Western and regional allies, in a manner that goes completely against the attitude of his predecessor, Barack Obama. A Western official said: "Based on U.S. intelligence, Trump is convinced that the regime is responsible for the sarin gas attack. He wanted to do something that would make him completely different from Obama, especially since using sarin was a breach of the chemical disarmament agreement between Moscow and Washington in 2013, and to restore America's leadership in the world," which was rejected by Moscow and Damascus. Michael Ratney, the U.S. envoy to Syria, said Washington was confident the Assad regime used nerve gas in Idleb, adding that the action is further proof of the regime’s non-compliance with its legal obligations under the Chemical Weapons Convention and U.N. Security Council Resolution 2118, including its commitment to uncovering and destroying of its entire arsenal of chemical weapons.

Second, Trump gave the green light to the U.S. military to strike from the Mediterranean Sea before heading to meet Chinese President Xi Jinping, which could be interpreted as using the "punishment" of Damascus to send a message to North Korea, an ally of Beijing. It was noted that China's U.N. delegate Li Baodong did not join the Russian position during the public meeting in the Security Council to discuss the U.S. strikes, and preferred rather to stress the importance of the political solution in Syria.

Third, the strikes, carried out despite the presence of the Russian S-400 missiles in Syria and after informing Russia of the need to withdraw its soldiers from the base, have dispelled the impression in America of a special relationship between Trump and Russian President Vladimir Putin. There has been an upsurge in Washington's criticism of Moscow's positions and Western countries' attempts to raise criticism of Russia and its possible involvement in air raids on Khan Sheikhoun following the chemical bombardment which were done in a bid to remove any evidence an international mission could find.

Fourth, for Syria, the strikes cut off the path for a possible "normalization" between Washington and Damascus, and affected the Trump administration's handling of President Bashar al-Assad. It also made more difficult any cooperation between the U.S.-led coalition and the regular forces in the fight against the Islamic State (ISIS), which is a priority for Trump, as well as the fight to liberate Raqqa or to control it after ISIS' expulsion. Some American officials are now talking again of the need to "overthrow of the Syrian regime," that Assad is "not part of Syria's future" and that his departure is necessary for the stability of the country, only a week after U.S. officials said the Syrian regime was "not a priority now" relative to the fight against ISIS.

According to officials, the coming days will show which of the two tracks will be taken by the Syrian crisis and the relationship between Washington and Moscow.

The first track would include a continued military escalation between the two countries and the freezing of the "disengagement" agreement between American and Russian air forces over Syria, as well as the escalation of media campaigns. One can highlight the decision by British Foreign Secretary Boris Johnson to cancel his first visit to Moscow in five years and British Defense Secretary Michael Fallon’s statement that Russia is responsible for every victim in Syria. A Western official said some countries were pushing for foreign ministers of the G-7 countries to lend support to U.S. Secretary of State Rex Tillerson before his visit to Moscow, where he will meet his Russian counterpart Sergey Lavrov and President Putin on Wednesday. Among the ideas put forward is the formation of an international coalition led by America, which would face the emerging alliance under the leadership of Russia and with Iran, with the full support of the regular Syrian forces. This alliance appeared to emerge on Sunday as the allies of Damascus declared that the American strikes "exceeded the red lines." Given that Trump's priority is to fight ISIS, the international coalition can lead the battles defeating the organization in eastern Syria without any coordination with Russia or any contact with Syrian government forces. In such a scenario, officials do not rule out the possibility of further strikes against the Syrian army and the possibility of turning the goal of unifying the armed opposition factions on the list of the CIA's "military operations room" in Turkey into regular combat forces, in addition to punitive legislative measures taken by the U.S. Congress. In practice, this means strengthening the areas of influence of each side, so that America will seize the east of the Euphrates River, and Russia and Iran will strengthen their positions west of the river, with Washington returning to discuss the option of safe areas under its protection or under a de facto understanding with Moscow.

The second track, after the strikes and the strengthening of Washington's military position in Syria on the one hand and the escalation by Russia, which sent its cruiser to the Mediterranean Sea and froze air operational cooperation, on the other hand, the two sides could agree during the visit of Tillerson on the principles of a military-political agreement in Syria linked to other global issues. "Each side has strengthened its negotiating position militarily and its alliances before sitting at the table for a possible deal," an international official said.

International officials are pushing to capitalize politically on the U.S. strikes by linking them to the Geneva negotiations and Astana meetings. It is noticeable that Trump talked of a political solution when he announced the strike. "We are considering our options and our next steps. We will continue our efforts to defeat ISIS and other terrorist organizations and achieve calm throughout Syria and support a fruitful negotiating process that contributes to the establishment of stability and building a better future for the country and its citizens.”

U.N. envoy Staffan de Mistura will attend a Security Council session on April 12 to urge member states to support the Geneva process and the return of the Syrian government and opposition delegations to the Swiss capital to engage in serious negotiations to implement Resolution 2254. In the coming days it will be decided whether the link between airstrikes and the political track is possible. The focus would be on the behavior of the regime and its engagement in the negotiating process in a serious form, rather than on regime change, given that the survival of Syrian institutions, gradual change and a political solution are common objectives between Washington and Moscow. The fate of Mr. de Mistura is also at stake given that there are talks that he may resign and be replaced by one of three candidates: Sigrid Kaag, the U.N. representative in Lebanon who was responsible for chemical disarmament, Haris Silajdzic, the former Bosnian foreign minister, and the U.N. representative in Iraq, Jan Kubis.