Writing for loyalist newspaper Al-Watan, Maysoun Youssef says the U.S. is likely using the Geneva negotiations to forward their own version of the Russian-proposed 'de-escalation zones' deal 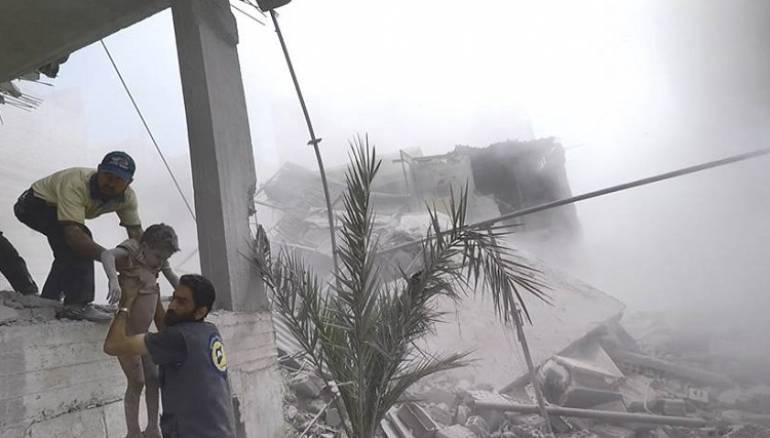 Observers stopped short upon the announcement of the brief deadline for the “Geneva 6” talks called for by the United Nations, and many questioned the seriousness of the proposed negotiations given the time constraints and the lack of preparation. The questions raised doubts about the tacit intentions of those behind the calls and who is mobilizing to achieve them. So what are these intentions?

Days ago in an interview with the Belarussian ONT station, President Bashar al-Assad described everything that had happened in Geneva in previous rounds as mere media presentations, adding that they did not offer anything tangible or any specific boost to the political process aimed at a real solution to the Syrian crisis. It is notable here that Syria has participated in these meetings very seriously, with strict discipline and high professionalism, despite knowing the nature of these meetings, in keeping with Assad’s description. The answer, as we see it, is that Syria also wants to benefit from the from the available media opportunity in Geneva and send a message to global public opinion revealing the facts that the aggressors have sought to obliterate in keeping with their strategy of deception, slander and falsehood.

With the return to Geneva 6, Damascus also knows that this round will not offer anything, because the aggressive front against Syria is not yet ready to acknowledge its failure and recognize the need to move toward a solution that restores security and stability to the country on the basis of its unity and independence. With that, Damascus will go with its familiar seriousness and its certain decisiveness, because it sees that these meetings, and through the media as well, could be an occasion to distort the “de-escalation zones” agreement, which Turkey has ensured will be implemented alongside Russia and Iran, and which America has accepted — albeit a lukewarm acceptance, disguising the intention of distorting it until American satisfaction is corrected.

In following the promotional Western media, we see the term “de-escalation zones” receding with the expression “safe zones” advancing. We know that the other expression is what America wants and is working to impose in Syria in accordance with international law. Therefore, we think that the journey to distort the “de-escalation zones” agreement could begin with the Geneva proceedings. If America succeeds in this marketing, it will earn a victory in Syria in confronting Iran and Russian, which are guarantors to the deal.

Therefore, we see that Geneva 6, from which nothing positive is being expected, could be feared in terms of media coverage, and so for that reason the Syrian delegation will attend in order to derail the attempt, just as it has derailed previous Western conspiracies. Our professional delegation will respond to every question and to every position with behavior in a way that suggests the results will be assured.