Writing in Al-Watan, one of Assad's top aides dissects the escalating rhetoric over nuclear weapons seen in the Western media 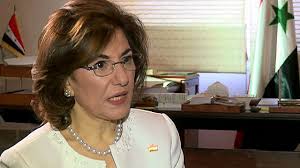 They said that these statements would skew constructive discussions between Russia and the West. Officials and media also went on to accuse Putin of reigniting the flames of the Cold War.

However, Western media, as usual, neglected the fact that the one who began to talk of these weapons and the need to develop them in his annual address was Trump, who said in his State of the Union speech: “As part of our defense, we must modernize and rebuild our nuclear arsenal, hopefully never having to use it, but making it so strong and powerful that it will deter any acts of aggression … Perhaps someday in the future, there will be a magical moment when the countries of the world will get together to eliminate their nuclear weapons.”

The United States stands as a stumbling block in the path to reaching a comprehensive global agreement to prevent the spread of nuclear weapons. Russia has repeatedly called – most recently Foreign Minister Lavrov’s call on Feb. 28, 2018 – on all countries of the world to join the nuclear disarmament process. This came in a speech the Russian foreign minister delivered in a disarmament conference in Geneva, where he expressed Moscow’s concern about the new American positions in its nuclear strategy, especially in lifting the role of nuclear weapons and planning to deploy limited destructive power missiles, with which it is attempting to encircle Russia in every location. Putin said that the United States had rejected all Russia’s proposals to resolve the issue of the missile shield system.

Going back to Trump’s speech, he called on Congress to end the “dangerous reduction in defense spending" and for full funding for the armed forces. In this respect, the budget increase in American defense spending this year – the increase alone – almost matches the Russian defense budget. Trump did not stop there, but allocated Russia and China a dose of hatred and latent threats when he said: “Around the world, we face rogue regimes, terrorist groups and rivals like China and Russia that challenge our interests, our economy and our values. In confronting these horrible dangers, we know that weakness is the surest path to conflict, and unmatched power is the surest means to our true and great defense.”

The frenzied paradox between the behavior of the Western media in its reaction to Trump’s speech and its reaction to Putin’s speech confirms, without the slightest doubt, that Western media has become one of the tools of war of the Western colonial system and that one of Russia and China’s priorities – and all our countries – should be first, before everything, to produce media tools that deliver real voices to the ears of listeners, viewers and the interested, and not leave the media arena an open space for those who claim to lead the world while they rob us of our riches and ignite wars in every place, and who rob countries and their local sources of wealth by force of arms and with false claims of ensuring freedom and human and civil rights.

However, the main reason which sparked the panic of Westerners and pushed them quickly toward antagonism and worry around Putin’s speech was that this speech was accompanied by images of developed and capable weapons, which marked a real sign that Russia is a new global pole that the United States and the West cannot ignore after today.

The United States itself has decided to focus on strength of arms, as was expressed clearly in Trump’s speech, and so Putin also heard the voice of Russia by telling it that the Russia defense budget may not be high because we produce developed weapons at a low cost that cannot be deterred or intercepted. Commentators in the Zionist entity (Israel) admitted that the Russian weapons advancement over American weapons over a generation or two explains the state of delirium afflicting Western commentators after Putin’s speech.

Putin, with wise leadership, understands the significance of American statements pertaining to Russia and nuclear and sub-nuclear weapons, and showed them in images of Russia’s capabilities so that they know that when they speak about Russia and imposing sanctions on it, and when Russia insists on using the expression “Western partners,” that this is not from a position of weakness, but from an attempt to prevent the world from a new Cold War or nuclear confrontation, or the like.

However, when the Americans insist on their haughty style and their belief that they are an invincible force, and that their country is above all others, Putin places the elements of Russian power on the screen in order for them to see that they will not after today be able to play with the fate of humankind. He did not forget to mention that “Russia will respond directly to the use of nuclear weapons against it and against its allies if it is subjected to danger from other powers.” Trump knocked on the door in his State of the Union address on Jan. 30, 2018, and the response was heard from Moscow on March 1, 2018. Those who knock on the door will hear the response.

The new Russian pole charts a method in dealing and winning credibility that erodes colonial powers and their contempt for dignity, security, security and the safety of other peoples.