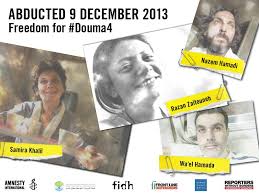 The families and friends of the four human rights activists who were abducted in Douma four years ago have launched an appeal for their immediate release. Below is a translation of their appeal:

“Tens of thousands of Eastern Ghouta residents have been displaced and more displacement is likely, large numbers have been placed in temporary shelters where they are subjected to humiliations of security and livelihood by the Assad forces. However, those who suffer the most difficult position in this tragic situation are always the four who were forcedly disappeared four years and four months ago.

"All the evidence obtained all the time indicates the responsibility of Jaish al-Islam for the kidnapping of Samira al-Khalil, Razan Zeitouna, Wael Hamada and Nazim Hammadi, in an attempt by the Salafist formation to impose their exclusive authority in Douma, within a context that experienced, among other violations, the assassinations and arrests of many citizens, including Abu Sobhi Taha and Abu Nazir Khebbeyeh, who were subjected to brutal torture, and were released only recently to the desert with those who were displaced from their homes.

"We, the families and friends of abductees, have called for help from a variety of sources, after we put in the public's hands strong evidence that assumes the sole responsibility of this formation. Again, we regret that we are obliged to repeat the request for assistance today. We ask everyone, within any political, human rights, cultural or religious organizations, to shoulder their responsibilities and raise their voice on this issue. Samira, Razan, Wael and Nazim are not unknown, neither before nor during the revolution, and their cause is known in all Syria and widely in the world. It is unthinkable that the emirate that has established itself to kidnap, arrest, torture and assassinate is disintegrating today, and the fate of its victims remains unseen. There is no justice, conscience, law or issue that can justify the continuation of those who can speak in silence.

"We demand the release of Samira, Razan, Wael and Nazem immediately, and ask you to help us to pursue and criminalize the leaders of Jaish al-Islam's security, religious, military and politicians for committing this crime, and many others. If they escape the accountability they deserve, how can we demand that Bashar and his jubilation should not escape due punishment?

"Samira, Razan, Wael and Nazim have families, loved ones and friends who have suffered the pain of their absence without the help of public bodies for more than 50 months. They ask: Where are our loved ones? Why does not someone say anything?

Do not leave us for fear and fear, please!”