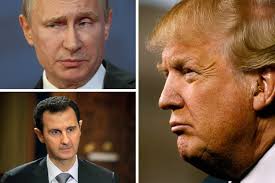 Why is Israeli Prime Minister Benjamin Netanyahu “very interested in the Trump-Putin summit?” It is because “he hopes they will reach the real deal of the century,” – a deal that has nothing to do with a solution to the Palestinian cause or to the so-called deal of the century.

So what is the deal of the century that Netanyahu is dreaming about? It calls on Trump to accept Russia’s occupation of the Crimean peninsula and East Ukraine and lift the sanctions imposed on it, while allowing Putin to control Syria. In exchange, Putin will expel the Iranians and their supporters from Syria, thus granting Netanyahu a historic victory.

This is what Nahum Barnea, editor of Political Affairs in Yedioth Ahronoth, believes. However, despite the major regional and international transformations, he skeptically said: “They are relying on Putin in Israel. I am not sure that they are counting on the right man. Israel’s real card in Syria may be Assad”.

“At the moment, Assad needs Russian fighter jets and militias that are commanded by Iran, but afterwards, when he controls the whole of Syria and emerges as the major victor in the civil war, he will want to go back to being the only ruler. ‘The Iranian did his part and must leave now’ is what his father would have said. The late Hafez al-Assad is the only enemy who Israel misses.”

This is Barnea’s opinion. But, the Crimea and East Ukraine conflict are strategic issues to the US, and it is unlikely that Trump will give up on them just for Syria’s sake if there aren’t more important agreements to be reached.

Why would the Americans concede Crimea and East Ukraine to Moscow and, on top of all that, reward it with Syria? These American concessions in exchange for coaxing Moscow against Iran seem like a very generous “deal of the century” for Russia, unless we see a better price!

The nature of Russia’s commitments to Syria is also not clear. We have seen an important development in the past few days when the Iranians and their militias were prohibited from participating in the battle in the Daraa governorate and Golan in compliance with Israel’s conditions.

The Russian military police replaced the Iranian Revolutionary Guards. This American-Israeli-Russian-Syrian cooperation to exclude Iran from the South is a precedent. What else? Will the Russians accept the second phase, of fighting the Iranians, the Lebanese “Hezbollah” and Iraqi militias if they refuse to voluntarily leave Syria?

Before we reach this point, we must, of course, hear Assad himself commanding the Iranians to leave. The Israelis are saying Assad does not want to or cannot do so. Washington had previously tested him when it proposed that all foreign troops, including American, Turkish and Iranian ones, exit Syrian territories, but Damascus only approved the Turkish and American departure.

So what does Netanyahu see that we do not? Maybe he thinks there is a unique chance to end the Golan dispute in exchange for supporting the Assad regime regain control over the whole of Syria.

We are facing a completely new situation because the Syria of today is not the pre-2011 Syria. The country can be rebuilt, while also establishing political axes that can get Iran out of Syria and weaken it in the region, including Lebanon.

This is why Barnea is doubting the possibility of a solution and saying that the Israelis miss Hafez al-Assad, who was able to play on all sides. It was Hafez who paved the way for the transfer and settlement of Palestinian fighters from Jordan to Lebanon and then dispatched his troops to Lebanon under the excuse of ending the Lebanese-Palestinian fighting.

He later contributed to getting rid of the Palestinian fighters in wake of the eruption of dispute with them and Israel’s insistence that the Palestinian Liberation Organization and its leader Yaser Arafat be expelled.

Hafez al-Assad got rid of the Palestinians and brought the Iranians into Lebanon, which was under his protection. He then assumed control of Iran’s product, “Hezbollah”, and used it to maintain balance with Israel.

Netanyahu thinks it is now possible to hunt several birds: the Iranian presence, Lebanon, Golan and ending the state of war through the real deal of the century.