The new text re-draws the geography in a way that suits the nature of the Jazeera region, Kobani and Afrin 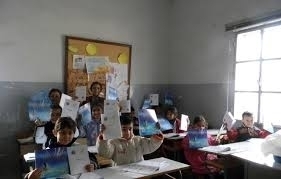 The autonomous Jazeera Canton has issued a decision to make some adjustments during the next academic year on the subjects of "geography and history", and to replace the National Education texts with a "Democratic Nation" text representing the scientific and democratic culture realized in the thoughts of the historic Kurdish leader Abdullah Ocalan.

The news was reported by al-Akhbar Lebanese newspaper which reported the news from the head of the Education Commission in the Canton, Abdu Saleh.

Abdu was quoted as saying that the National Education text embodies the beliefs of  the Baath Party and so it was canceled, taking into account highlighting the intellectual and cultural diversity in the region.

The adjustments would re-draw geography in a way that suits the nature of the three Cantons of the Jazeera region, Kobani and Afrin, the rivers, mountains, underground resources and population. There will be also a special curriculum of three books in Kurdish language, taught from the first grade to the ninth one.