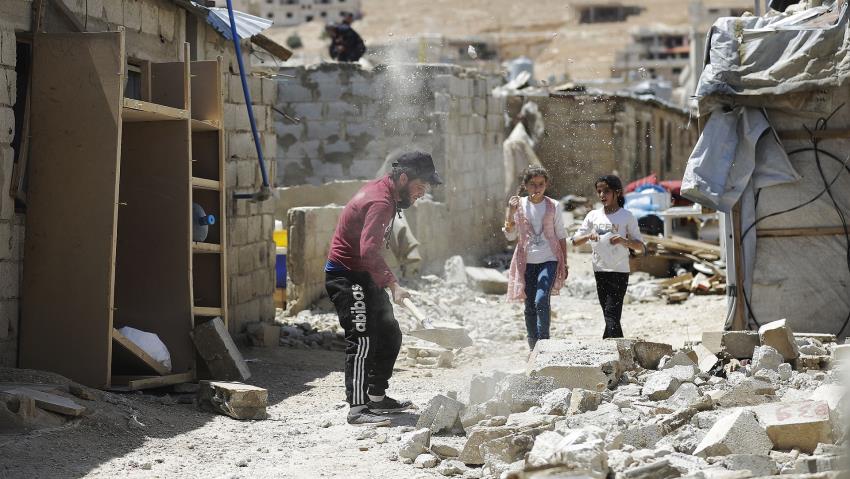 Refugees who fled to Lebanon during the brutal Syrian conflict are being forced to destroy their own homes in Lebanon in an effort to pressure them to return to Syria, officials from humanitarian organisations warned during a conference in London hosted by Amnesty International and Syria Solidarity UK.

“There is a new trend now with people declaring the war in Syria has ended and calling for the return of refugees, but refugees are pushed to the point where return is neither safe nor voluntary,” Rouba Mhaissen, the director of the charity SAWA for Aid and Development told The New Arab.

“The war in Syria has not ended. There is fighting in Idlib and several other locations. Refugees have been arrested and detained following their return to Syria and male refugees over the age of 15 can be conscripted against their will,” she said.

“Even without this, there is no infrastructure for refugees to live a dignified life inside Syria. In most cases they can’t return to the towns and villages they are originally from,” she added.

According to AP, Syrian refugees have had to pay for the demolition of their own homes in the Arsal area, endangering 15,000 Syrian children that could be made homeless as a result.

It came after Lebanese President Michel Aoun recently claimed that “the wave of Syrian displacement has produced negative repercussions that affect all Lebanese sectors, saying the return of refugees “can’t wait for a political solution to the Syrian crisis”.

A recent study found that 75 percent of Syrians in Lebanon between the ages of 15 and 25 have contemplated suicide, due to the conditions they face in their new home as well as the fear of being forced to return to the war-torn country.

The Amnesty International conference entitled Freedom Across Borders highlighted the trauma and psychological safety of activists and refugees, as well as accountability for war crimes in Syria.

A special session featuring Syrian and Sudanese activists was dedicated to the similarities and differences between the 2011 protests against President Bashar al-Assad of Syria and the 2019 uprising against President Omar al-Bashir of Sudan.

When the Syrian uprising against President Bashar al-Assad began in 2011, few people expected the regime to respond as brutally as it did. The uprising turned into an armed conflict which resulted in over 500,000 deaths. Tens of thousands of people were arrested by the Assad regime, many of whom were executed or tortured to death.

Qudmani himself was arrested in 2013 and held in a prison cell for 60 days and was forced to stand for hours on end in a cell containing 70 inmates, some of whom died because of the overcrowding. But despite his struggles, he maintains he has no regrets about participating in the Syrian uprising.

“Yes, things went in an awful direction, but it was not in our hands, it was the nature of the oppression of the Syrian regime that led to the revolution,” Qudmani said.

Most of the conference attendees acknowledged that the situation for Syrians both inside and outside Syria was getting worse. For many, the removal of the Assad dictatorship has looked increasingly unlikely and hundreds of thousands of people have been displaced in the past two months as a result of a fierce regime assault on opposition-held Idlib province.

However, they expressed hope that there would be accountability for the many war crimes committed during the Syrian conflict in the near future, as efforts to document violations continue.

“The Syrian regime are doing all they can to distort the truth and lie but a great part of holding the criminals accountable is holding on to the truth and making the truth known. In keeping the truth alive, you ensure that accountability will be reached,” Nuha Noureddin, a Syrian refugee living in the UK said.