Thousands attend the funeral of Abdelbasset al-Sarout, civilians killed in regime airstrikes, refugee camp in Lebanon burns down and condemnation of journalist's kidnapping. Catch up on everything that happened over the weekend. 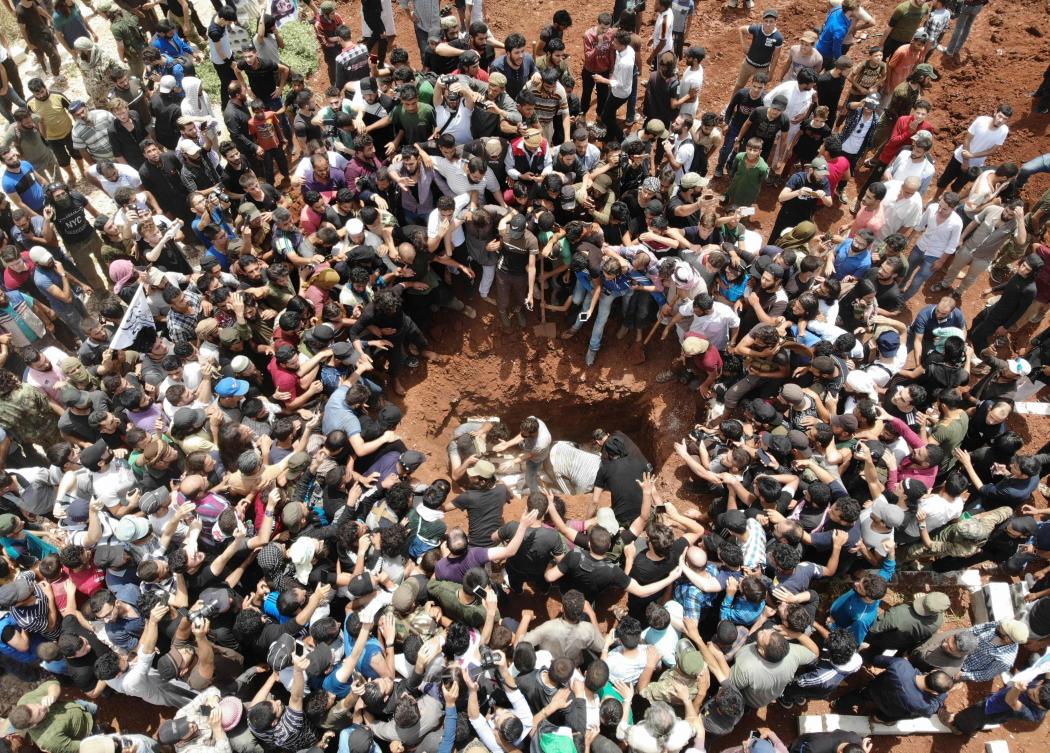 1. On Sunday, thousands of people flocked to the funeral of a Syrian soccer star turned fighter, who became an icon of the revolution against President Bashar al-Assad.Abdel Basat al-Sarout, 27, died on Saturday from wounds he sustained in northwestern Syria, where an army offensive has pounded the last major rebel bastion for weeks. Once a well-known goalkeeper from the city of Homs, Sarout gained a new kind of fame when the popular uprising against Assad’s rule erupted in 2011. He was dubbed the “singer of the revolution” for chanting ballads at rallies that eulogized slain activists and vilified the president. People chanted, honked their car horns and waved rebel flags along the route of the funeral in the border town of al-Dana, where one of Sarout’s brothers is buried. Crowds stood on the roofs to watch Sarout’s body, wrapped in white, being carried through the town. Rebels from his faction, Jaish al-Izza, fired into the air. In the mosque, men including fighters in combat uniform kneeled in front of his body to pray, some of them weeping.

2. At least five civilians were killed when Russian and Syrian government warplanes targeted Syria’s northwest, as residents marked the holiday of Eid al-Fitr. A local source told Anadolu Agency the five people died on Wednesday in aerial attacks targeting the town of Kansafra and three villages in Idleb. The Syrian Observatory for Human Rights put the death toll at 10, saying two children were among those killed. Another civilian died in shelling by government forces in the northern Hama countryside, also held by rebels, said the group, which relies on a network of sources on the ground in Syria. Government air raids also hit a motorcycle in the Idleb town of Maaret al-Numan, killing a woman and her two children, said the Observatory.

3. A Syrian refugee camp in Lebanon, which housed around 150 tents, was set alight on Thursday night in the town of Deir al-Ahmar. The camp, according to Al-Araby al-Jadeed, which was home to hundreds of refugees, was completely burned down after a clash between the Lebanese police and refugees from the camp, forcing all refugees to leave the camp. This comes after refugees in the camp had severe restrictions imposed on them, including a curfew after locals called for them to be forcibly removed from the area. The Syrian refugees fought back against the restrictions, leading to clashes with police forces, according to local media. Subsequently, 33 Syrian men were arrested and Deir al-Ahmar’s Mayor, Latif Qazah, requested that the camp be shut down, before it was burned down later on at night.

4. The International Federation of Journalists (IFJ) has condemned the abduction of Al-Ikhbariya TV correspondent, Mohammad Tawfiq al-Saghir, in the province of Hassakeh, by the militias of the “Kurdistan Workers’ Party” (Asayish). “The IFJ joins the Syrian Journalists’ Union in condemning this violation of press freedom and demands the immediate release of the correspondent.” the IFJ said in a statement quoted by SANA. Secretary-General of the IFJ, Anthony Bellanger, said that Saghir had been abducted for doing his job and called for his immediate release.

5. A media source has refuted as “baseless” all rumors and statements about the resumption of any relations with Hamas. The unidentified source was quoted by SANA as saying, “The stance of Syria on this issue is principled,” the source said, adding: “This stance, in the past, was built on the fact that Hamas was a resistance movement against ‘Israel’, but, later it became clear that it is the blood of the Muslim Brotherhood that dominates this movement when it supported the terrorists in Syria and engaged in the scheme that ‘Israel’ wanted.” The source affirmed that the news being circulated will never change Syria’s attitude towards those who have been rejected by the Syrian people since the beginning of the war.